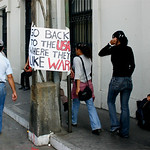 While Americans are justly concerned about the ongoing humanitarian disaster in Syria, they must be careful whose narrative they accept before deciding what we should do about it. Both sides have been responsible for civilian deaths and torture, but we are only being told one side of the story, and a distorted one at that. Though readily apparent to anyone who wants to look at the facts, the American role in the violence is never clearly spelled out. For instance, famous "humanitarian" Nicholas Kristof has been on the bandwagon arguing for US military intervention. It's only right that the plight of Syrians he is highlighting should be put in proper perspective.

In his latest article, Kristof makes an emotionally powerful appeal for Obama to take in Syrian refugees. However, in doing so he compares the violence in Syria with the Nazi attempt to conquer the Western world. The truth is that the Syrian conflict, though often called a "civil war," is actually a case of a sovereign nation defending itself against an invasion of foreign terrorists sponsored by the US, Saudi Arabia and their allies.

The US government claims the right to topple the government of Syria for its own purposes, regardless of the effect on the civilian population. The claim of "humanitarian intervention" is unjustified either by the facts or international law. The effort is being led by a known al Qaeda affiliate, a fact not well concealed by claims about a mythical "moderate rebel" faction. It makes no sense to blame the resulting carnage on a government that is defending its sovereignty against a ruthless and brutal enemy.

Kristof's implied comparison of Assad to Hitler might be written off as a bad analogy, except that, almost as an afterthought, he chides Obama for not doing "more to end the slaughter." Since taking in more refugees would do nothing to ease the conflict, he must be referring to his previous arguments for a no-fly zone (here and here).

"Establishing a no-fly zone" means attacking the Syrian military. That's an act of war. Since neither we nor any NATO ally has been attacked by Syria, it would constitute another illegal war of aggression, much like Iraq. Vietnam might be a better comparison, since both involve baiting the targeted country, as the US did in the Gulf of Tonkin. There, as in Iraq, we went to war based on lies. Or perhaps Libya is the closest comparison, since the NATO attack on the Libyan people and government forces started with a no-fly zone. Although that war used the legal fig leaf of a UN resolution, a Syrian no-fly zone would not. Having been fooled into supporting one illegal NATO war, Russia and China will not support such a resolution again. If NATO acts unilaterally, it will be even more blatantly illegal than the attack on Libya. The results would be at least as disastrous.

A major difference between Vietnam and Syria is that Russia has combat troops in Syria. An attack could be construed as an attack against Russia, which is legally in the country at the request of the Syrian government. The US recently threatened to do just that when the Syrian Army bombed separatist Kurdish forces, with which US Special Forces were illegally embedded.

Clinton and other neocons seem unconcerned with the possibility of sparking a war with a nuclear-armed power. They are calling for a no-fly zone or even more aggressive actions. Trump would be under intense pressure to abandon his no-regime-change position and do the same. No one in the foreign policy establishment appears willing or able to question the groupthink under which it is operating.

Few in Congress seem to understand that most of the official statements coming from the White House, the Pentagon, the State Department and the intelligence community reflect a distorted, one-sided view of the conflict that ignores the facts, international law and common sense. It's our job to educate them and demand that the government attack the real roots of the terror in Saudi Arabia, Turkey, Israel and Washington itself.

This article originally appeared on the website of Soldiers For Peace International. It may be reproduced, unedited and with attribution, 48 hours after it appears on this site.

Related Topic(s): Bashar Al-assad; Conflict; Hitler; Humanitarian; Invasion; Refugees; Slaughter; Syria; Torture; Withdrawal_From_Iraq, Add Tags
Add to My Group(s)
Go To Commenting
The views expressed herein are the sole responsibility of the author and do not necessarily reflect those of this website or its editors.