The Huffing and Puffing of the .1% MSM. Did you see the news conference a few weeks back when the US and Russian were on speaking terms? There is Putin sitting with legs wide open and hands covering his crotch Messaging to the West, I am about to fu*k up your plans. And Obama watching out of the corner of his eye, and deciding to uncross the feminine posture of his legs because he's got some male macho fu*king up some sh*t that he and his team want to do.

It seems obvious that Obama never had to put up his dukes while growing up or else he would have learned how to fight for himself, unlike the rolling over he did the first seven years of his tenure -- But I digress.

Ok, here is another American football analogy. There are only seconds remaining in the presidential selection bowl.

The .1% is on offense at quarterback, with Orange Hair and We came/He dead and MSM in a trips formation on the right.

The .1% through their coach Hank Kissinger has clarified earlier in their huddle with Donald of Orange, that he must carry out a credible head fake in his run for the presidency, he must perform an incredible ass fake, jiggle, whatever, to induce so call progressives and democrats to rush up toward the offensive line to stop him so that Ms. Wecame/Hedied can so very slowly stroll up field to catch the soft ball toss by MSM.

The play develops with the .1% quarterback doing a reverse pivot (causing the progressive linebackers to hold their position instead of rushing to sack the QB), faking a quick toss to the left outside, where only the down ballot players are located, turns and runs toward the right, threatening to keep the ball, pitch it to Icame/HenowDed or throw downfield to MSM.

MSM does one hell of a fake job getting the gullible and other gatekeepers to concentrate on stopping the OrangeOne, while the down ticket no names streak down the left side of the field in a space created by sleight of hand of the .1%. Many in the crowd could see what was developing, but they were mesmerized and sickening quiet as the .1% dollars reverse flowed to those down ticket of Orange the Dickless. 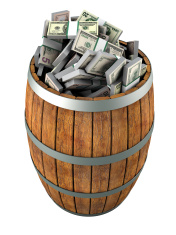 Barrel of Dollars from the Quantitative Facilities.
(Image by freeimages.com)   Details   DMCA

I have no right to complain even though I suspected a trick play as the .1% came up to the line. Why would the.1% risk having a blabber mouth plant the idea that NATO had outlived its usefulness? Or that the trade deals were a bunch of crap for the 99.99%, certainly the 50%? No, it would not have been prudent. The .1% is not yet prepared to go for total population control this early in their Plan that a Trumpet presidency would cause: riots in the American cities and countryside and the resulting roll out of permanent martial law and surveillance. Their plate was full and their cup runneth over with the likes of a failed coup in Turkey for whom they and their western cohorts must pay the chump change of a couple of billion dollars in extortion demanded by Erdogan or face his unleashing of leased terrorists in European cities. Yes their bloody hands were full from bombed and drone attacked civilians in funeral processions, and UN humanitarian convoys, patients, doctors and nurses in hospitals one of which where those anti-globalist doctors without borders were aiding the sovereign government, droning on and on to Libya, Yemen with a drone strike here and there, keeping a peering eye on Mo-uglies friends in Mogadishu, trying to pave a road to Tehran, while prepping the former Russian protectorates for turmoil and division, aka The Stans, and talking smack to the Russians about the Crimea, as they move to conduct war execercises in Poland and place missile systems in not only Poland but Romania all the while letting the Chinese know that they are pivoting toward them with Australia and the Philippines in tow -- That's a lot all right. I could have edumacated myself about who was running down ticket and yelled and screamed and organize but I was too focused on the fact that the .1% was so obvious that everyone would know to vote downtown to throw out the .1% cronies.

Related Topic(s): Government; Presidency; Primaries, Add Tags
Add to My Group(s)
Go To Commenting
The views expressed herein are the sole responsibility of the author and do not necessarily reflect those of this website or its editors.