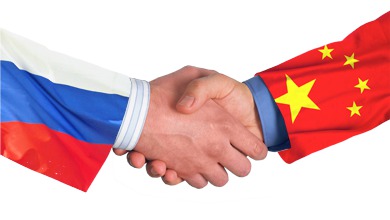 The next BRICS summit, in Goa, is less than two months away. Compared to only two years ago, the geopolitical tectonic plates have moved with astonishing speed. Most BRICS nations are mired in deep crisis; Brazil's endless political/economic/institutional debacle may yield the Kafkaesque impeachment of President Dilma Rousseff.

BRICS is in a coma. What's surviving is RC: the Russia/China strategic partnership. Yet even the partnership seems to be in trouble -- with Russia still attacked by myriad metastases of Hybrid War. The -- Exceptionalist -- Hegemon remains powerful, and the opposition is dazed and confused.

Slowly but surely -- see for instance the possibility of an ATM (Ankara-Tehran-Moscow) coalition in the making -- global power continues to insist on shifting East. That goes beyond Russia's pivoting to Asia; Germany's industrialists are just waiting for the right political conjunction, before the end of the decade, to also pivot to Asia, conforming a BMB (Berlin-Moscow-Beijing) coalition.Germany already rules over Europe. The only way for a global trade power to solidify its reach is to go East. NATO member Germany, with a GDP that outstrips the UK, Canada, Australia and New Zealand, is not even allowed to share information with the "Five Eyes" secret cabal.

President Putin, years ago, was keen on a Lisbon-to-Vladivostok emporium. He may eventually be rewarded -- delayed gratification? -- by BMB, a trade/economic union that, combined with the Chinese-driven One Belt, One Road (OBOR), will eventually dwarf and effectively replace the dwindling post-WWII Anglo-Saxon crafted/controlled international order.

This inexorable movement East underscores all the interconnections -- and evolving connectivity -- related to the New Silk Roads, the Shanghai Cooperation Organization (SCO), the BRICS's New Development Bank (NDB), the Asian Infrastructure Investment Bank (AIIB), the Eurasia Economic Union (EEU). The crux of RC, the Russia-China strategic partnership, is to make the multipolar, post-Atlantic world happen. Or, updating Ezra Pound, to Make It New.

Russia's pivot to Asia is of course only part of the story. The core of Russia's industries, infrastructure, population is in the west of the country, closer to Europe. BMB would allow a double pivot -- simultaneously to Europe and Asia; or Russia exploiting to the max its Eurasian character. Not accidently this is absolute anathema for Washington. Thus the predictable, ongoing no holds barred exceptionalist strategy of preventing by all means necessary closer Russia-Germany cooperation.

In parallel, pivoting to Asia is also essential because that's where the overwhelming majority of Russia's future customers -- energy and otherwise -- are located.

It will be a long, winding process to educate Russian public opinion about the incalculable value for the nation of Siberia and the Russian Far East. Yet that has already started. And it will be in full fruition by the middle of the next decade, when all the interpolated New Silk Roads will be online.

"Containment" of RC will continue to be the name of the exceptionalist game -- whatever happens on November 8. As far as the industrial-military-security-surveillance-corporate media complex is concerned, there will be no reset.Proxies will be used -- from failed state Ukraine to Japan in the East China Sea, as well as any volunteering Southeast Asian faction in the South China Sea.

Still the Hegemon will be in trouble to contain both sides of RC simultaneously. NATO does not help; its trade arm, TPP, may even collapse in the high seas before arriving on shore. No TPP -- a certainty in case Donald Trump is elected in November -- means the end of US economic hegemony over Asia. Hillary Clinton knows it; and it's no accident President Obama is desperate to have TPP approved during a short window of opportunity, the lame-duck session of Congress from November 9 to January 3.

Against China, the Hegemon alliance in fact hinges on Australia, India and Japan. Forget about instrumentalizing BRICS member India -- which will never fall into the trap of a war against China (not to mention Russia, with which India traditionally enjoys very good relations.)

Japan's imperial instincts were reawakened by Shinzo Abe. Yet hopeless economic stagnation persists. Moreover, Tokyo has been prohibited by the US Treasury Dept. to continue unleashing quantitative easing. Moscow sees as a long-term objective to progressively draw Japan away from the US orbit and into Eurasia integration.

Related Topic(s): Brics; NATO; Russia And China; Trade, Add Tags
Add to My Group(s)
Go To Commenting
The views expressed herein are the sole responsibility of the author and do not necessarily reflect those of this website or its editors.