Current Western accusations against Russia claim that it is trying to "re-establish its Empire", which fell apart when the Soviet Union imploded in 1991. The West's main case centers on the Baltic states and Poland, which, together with Ukraine and Belarus, have been in and out of the Russian orbit for centuries. Although there is not even a shred of evidence to suggest current Russian designs beyond its Western border, Western allegations provide a wonderful excuse for NATO to move troops and tanks smack up against their gigantic neighbor. But they cannot really be referred to as part of a Russian 'Empire' when past 'occupations' have been provoked by the fact that they have repeatedly served as the route for Western invasions of Russia./ 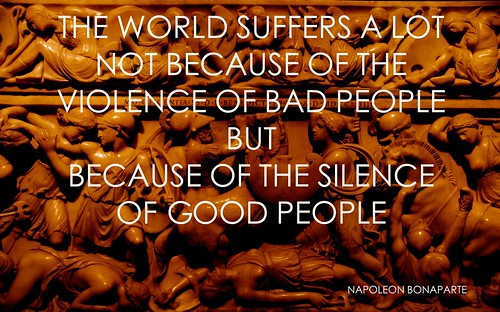 Suffering, according to Napoleon.
(Image by Vasnic64)   Details   DMCA

What Westerners really mean when they talk about a Russian Empire are the countries along Russia's vast southern border. Beyond the wall of the Ural Mountains, the Eurasian continent stretches for thousands of miles to the Pacific. The 'Empire' that President Putin is allegedly trying to revive did not evolve from independently ruled lands: its endless plains broken up by few rivers left it largely 'uninhabited' or terranullius, into the modern era. According to Wikipedia:

Terra nullius"is a Latin expression deriving from Roman law meaning "nobody's land".[1] It is used in international law to describe territory which has never been subject to the sovereignty of any state, or over which any prior sovereign has expressly or implicitly relinquished sovereignty. Sovereignty over territory which is terra nullius may be acquired through occupation, [2]though in some cases doing so would violate an international law or treaty..

Southern Central Asia was inhabited predominantly by Persian tribes until the 5th century, when Turkic peoples began to spread across the area. In the twelfth century, Ghengis Kahn's Mongol horsemen swarmed over the Eurasian plain all the way to Kiev and Muscovy. That large area on the Western side of the Urals was a thriving civilization known as Kievan Rus. The Mongols dug in for four centuries with a system of state ownership of land and people. Dictating the position of every Russian, this system continued under the all-powerful Tsarist state, and after the Bolshevik revolution. (See my review of Tibor Szamuely's incomparable "The Russian Tradition" at Opednews: http://www.opednews.com/articles/The-Russian-Tradition-by-by-Deena-Stryker-Class_Community_Conspiracy_Democracy-140509-717.html&series=314

From the end of the thirteenth century to World War I, the Ottoman Empire, home of the Muslim Caliphate, ruled most of central Asia, and it was through wars fought against Turkey that Russia acquired many of what are known today as the 'Stans' (Turkmenistan, Uzbekistan, Tajikistan, Kazakstan). After the Russian Revolution, these fledgling countries were incorporated into the Soviet Union. The eastern areas, known as East Turkistan or Xinjiang, were incorporated into the People's Republic of China.

From before the Christian era into the Middle Ages, the Silk Road made famous by Marco Polo's tales, traveled through Central Asia, fading and reappearing according to the waxing and waning of trade opportunities . In the twentieth century, the countries along its route saw significant modernization, and with the collapse of the Soviet Union they became independent members of the Russian Federation of Independent States.

So much for Vladimir Putin's Russian Empire. What about America's?

For thousands of years, North America was inhabited by Indian tribes, thus according to modern international law, it would have been considered terra nullius at the time of the European conquest. As white settlers moved westward, the original inhabitants were hunted down, survivors driven into 'reservations', where most of them have remained to this day. The US does not include any 'Indian' states - moreover, it has constantly intervened in Central America and Mexico, where 'development' is perhaps half that of the US. Our neighbors to a south which we long referred to as 'our backyard', are run by drug lords, its youth forced to join gangs or travel atop a train toward a US border, where unaccompanied children face deportation instead of care in what is touted as the wealthiest nation in the world.

The United States did not acquire its present boundaries until after the two year war that followed the 1845 annexation of the Mexican territory of Texas. Since 1945, the US has invaded 44 nations, according to a "History of U.S. Military Interventions since 1890" at http://academic.evergreen.edu/g/grossmaz/interventions.html. The chartdoes not include military exercises in foreign lands, the stationing of troops abroad, covert actions, the training of foreign troops, and many other forms of aggression.

It should hardly be necessary to belabor the point: While the US failed to incorporate most of the lands it invaded into the United States, tailoring its 'assistance' to benefit American corporations, Soviet Russia pursued a process of modernization that continues to this day. In an ultimate insult to its public, the American press has studiously avoided reporting on the greatest development project the world has ever seen: The joint Russian-Chinese New Silk Road, also known as One Belt, One Road: https://en.wikipedia.org/wiki/One_Belt,_One_Road, that will link China to Europe via ultra-modern rail, roads and ports.

Meanwhile, American Indians only make the headlines when they put their bodies in front of earth movers turning their ancient burial sites into oil pipelines.