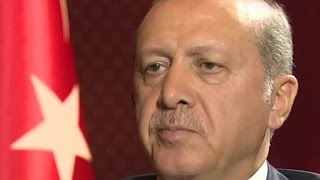 Amidst an astonishing, relentless, wide-ranging purge that shows no signs of abating, with 60,000 -- and counting -- civil servants, academics, judges, prosecutors, policemen, soldiers jailed, fired, suspended or stripped of professional accreditation, it's relatively established by now the Turkish government was very much informed a military coup was imminent on July 15. The information may have come from Russian intelligence, although neither Moscow nor Ankara will reveal any details. So, once and for all, this was no false flag.

A top, secular Middle Eastern intel analyst with an Istanbul front seat view to the coup clarified the internal political context even before the -- widely expected -- proclamation of a state of emergency (if France can do it, why not Turkey?):

"They knew five to six hours beforehand that a coup was in the works and let it go ahead, knowing, as they must have, that it would fail... This affair has propelled Erdogan to semi-divine status among his supporters. The way is clear for him to get what he wants, which will be a powerful presidency and removal of the secularism principle in the constitution. This would set the stage for the introduction of aspects of Sharia law. He tried this in the early years of the AKP government with the introduction of Zina, a strictly Islamic provision, which would have criminalized adultery and could have opened the door to the criminalization of other islamically illicit sexual relations as Zina is about this in general and not just adultery. But when the EU objected he backed off."

The intel source adds, "in the weeks leading up to this, Erdogan had been unusually subdued. In this same period the Prime Minister had been replaced and the new one had announced a complete foreign policy reversal, including repairing relations with Syria. Did Erdogan reach the conclusion himself that the Syria policy was unsustainable, or was it forced upon him by the party elders, against the background of the tremendous damage it has done to the country in various ways, let along to Syria? If it was pushed on him, then the failed coup gives him the opportunity to reassert his authority over the top echelon of the AKP. Certainly this came at a most convenient time."

Turkish historian Cam Erimtan adds to the context, explaining how "at the beginning of next month, the High Military Council of Turkey (or YAŞ, in acronymized Turkish) is set to convene and it is expected that a large number of officers will be made redundant then. The Turkish state is set to engage in a cleansing exercise, removing any and all opponents of the AKP-led government. This coup-that-was-no-coup then provides ample ammunition for a thorough culling of the ranks" even as the President has been pointing the finger across the Atlantic at the shadowy figure of Fethullah Gulen and his supposed terror organization FET (Fettullahcı Teror rgutu, or Fethullahist Terror Organization), insinuating that the coup plotters are part and parcel of this shadowy, clearly elusive, and possibly even non-existent, organization."

The end result won't be pretty; "Erdogan is now also being referred to as Turkey's Commander-in-Chief, which would indicate, among other things, that he regards the attempted coup as a personal attack on his figure. Whatever the coup plotters' motives might have been, the end result of their actions will be an even more wholehearted and enthusiastic acceptance of Erdogan's policy of Sunnification and possibly a rather swift dismantling of the nation state that is Turkey, to be replaced by an 'Anatolian federation of Muslim ethnicities,' possibly linked to a revived caliphate, as well as a possible return of Sharia to Turkey."

It's as if Erdogan has been blessed with a reverse Godfather effect. In Coppola's masterpiece, Michael Corleone famously says, "Just when you think you're out, they pull you back in." In Godfather Erdogan's case, just when he thought he was hopelessly entrapped, God -- as he admitted -- pulled him out. Talk about a Sultan of Swing.

The Lions against the Falcons

As Erdogan solidifies his internal iron grip, a formerly iron-clad connection -- NATO/Turkey -- slowly dissolves into thin air. It's as if the fate of Incirlik air base was hangin' -- literally -- by a few, selected radar threads.

There's extreme suspicion across the spectrum in Turkey that the Pentagon knew what the rebels were up to. It's a fact that not a pin drops in Incirlik without the Americans knowing it. AKP members stress the use of NATO's communication network to coordinate the putschists and thus escape Turkish intel. At a minimum, the putschists may have believed NATO would have their backs. No NATO ally deigned itself to warn Erdogan about the coup.

Then there's the saga of the refueling tanker for the rebel F-16s. The tankers in Incirlik are all the same model -- KC-135R Stratotanker -- for Americans and Turks alike. They work side by side and are all under the same command; the 10th Main Tanker Base, led by Gen. Bekir Ercan Van, who was duly arrested this past Sunday -- as seven judges also confiscated all the control tower communications. Not by accident Gen. Bekir Ercan Van happened to be very close to Pentagon head Ash Carter.

What happened in Turkish airspace after Erdogan's Gulfstream IV left the Mediterranean coast and landed in Istanbul's Ataturk airport has been largely mapped -- but there are still some crucial gaps in the narrative open to speculation.

As Erdogan has been tight-lipped in all his interviews, one is left with a Mission Impossible-style scenario featuring rebel F-16s Lion One and Lion Two on a special mission with their transponder off; their face-off with loyalist Falcon One and Falcon Two; one of the Lions piloted by none other than the man who shot down the Russian Su-24 last November; the by now famous tanker that took off from Incirlik to refuel the rebels ; and three extra pairs of F-16s that took off from Dalaman, Erzurum and Balikesir to intercept the rebels, including the pair that protected Erdogan's Gulfsteam (which was using callsign THY 8456 to disguise it as a Turkish Airlines flight).

But who was behind it all?

Related Topic(s): Coup; Recep Tayyip Erdogan; Turkey; Vladimir Putin, Add Tags
Add to My Group(s)
Go To Commenting
The views expressed herein are the sole responsibility of the author and do not necessarily reflect those of this website or its editors.