The Bible orders that children not be forced to pay for their parents' misbehavior, an injunction that has long since been replaced in Washington with guilt by association. 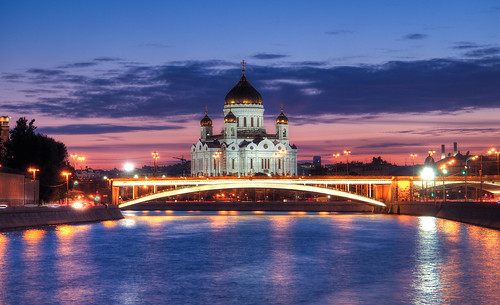 Cathedral of Christ the Saviour at dusk
(Image by kishjar?)   Details   DMCA

Ever since Karl Marx and Friedrich Engels stood up against nineteenth century robber barons, socialism has been anathema to America's rulers. After the Russian Revolution of 1917, measures intended to keep socialism at bay culminated in the House un-American Activities Committee (HUAC), chaired by Wisconsin Senator Joseph Mccarthy, that black-listed thousands of Americans accused of supporting the Soviet Union, some of whom committed suicide after losing their jobs.

The USSR imploded in 1991, due to bad management by a series of aging politicians combined with American policies aimed at taking it down. And yet, a quarter of a century after embracing market capitalism, Russia is still the target of US attacks, both metaphorically and literally. When President Obama, castigating Russia's 'behavior' as though he were rebuking a child, for supposedly violating US norms for the 'world community', President Putin replies that one country should not run the world. Together with most leaders, he calls for a multi-polar condominium in which the US would be one of four or five power centers. Unfortunately, Americans continue to be told their country is exceptional and hence must lead the world, while much of it is unhappy with the disastrous impact of US-style modernity on society's economic and mental health.

Once in a while, the MSM accuses Vladimir Putin of calling the West "degenerate", without the slightest attempt to spell out the reasons. Americans are unaware that the former FSB officer is profoundly religious, and that religion is central to his domestic policies. A recent book by a conservative French academic traces these policies to philosophers such as Berdyaev and writers such as Dostoevsky. In "Putin's Russia" Ivan Blot subjects the Russian president's influences to detailed scrutiny, while crafting a definition that is simple and succinct: "When man has ever more 'needs', he becomes their slave, killing fraternity as individuals turn ever more inward."

The Russian president's commitment to Eastern Orthodoxy and its moral teachings explains the support of traditional right-wing European parties, as well as the more elusive 'new right' and 'post-modernists' such as French philosopher Alain de Benoist and Italy's Bepe Grillo, leader of the Five Star Movement, both of whom condemn the social aspects of modernity that are harmful to the soul.

While the thrust of Blot's book is decidedly Catholic and conservative, the fundamental principles he sees in Russia's president dovetail to a remarkable extent with those of secularists around the world who oppose Having to Being, as I suggest in my book 'A Taoist Politics: The Case for Sacredness".

The upcoming American election pits an unpredictable businessman against a professional politician with a long history of deception. The former justifiably provokes fear of fascism, while the latter ratchets up the rhetoric against Russia, implying that its current population should pay for their grandparents' communist experiment.

The current 'lesser of two evils', like the averted gaze of a virgin bride, refuses to acknowledge the reality facing us: If Hillary becomes president, American children will pay for the insane Neocon plan of nuclear war with Russia.

Related Topic(s): Bible; Change; Deception; Guilt; History; Killing; Language; Marx; Modernity; Putin; (more...) Religion; Rhetoric; Socialism, Add Tags  (less...)
Add to My Group(s)
Go To Commenting
The views expressed herein are the sole responsibility of the author and do not necessarily reflect those of this website or its editors.