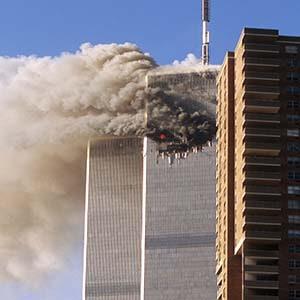 Copyrighted Image? DMCA
Part I -- Classified Pages On 27 November 2002, a bipartisan commission was established by Congress to investigate the 11 September 2001 attacks on the World Trade Center and Pentagon. By the time the commission was created, President George W. Bush had characterized the attacks as "acts of war," adding that "freedom and democracy are under attack." It was therefore to be expected that anyone who was actually, or even imagined to be, involved in these attacks was going to be labeled as an enemy. However, when on 22 July 2004, after two years of investigation, the 9/11 Commission's report was released, something was missing. Twenty-eight pages had been withheld from publication. These pages specifically discussed the connections between the 9/11 hijackers and individuals working in the U.S. for the government of Saudi Arabia. The withholding from publication of these specific pages was apparently ordered by the same George W. Bush who was ostensibly willing to confront anyone who would, in his worldview, threaten the U.S. -- "Bring 'em on!" For the next 12 years, that is, between July 2004 and July 2016, the 28 pages remained "classified" and therefore unavailable to the public or the press. They were available to members of Congress if they would travel to a "secure location," one person at a time, to read the document. They could take no notes nor reveal to anyone what they learned. So what was going on here? According to Senator Bob Graham (D-FL), a long term advocate of declassifying the pages, what all these years of suppression came to was a "carefully orchestrated campaign to protect our Saudi 'friends,' from the public revelation of 'ample evidence of Saudi Arabia's intimate ties to al-Qaeda and the 9/11 attacks.'" If Graham is correct, Saudi Arabia received a free pass despite being involved in acts of war against the United States. Part II -- Leverage How was this possible? Well, consider the following: there exists a long-standing commercial relationship and personal friendship between the Bush clan and the Saudi royal family. Even more important, Saudi Arabia has long managed the oil market to keep prices in the West at affordable levels. Presently, the Saudis have hundreds of billions of dollars invested, in various ways, in the United States (the exact figure is kept secret). These include stocks, bonds, real estate and currency holdings. And finally, Saudi Arabia is the top purchaser of US weapons, periodically buying as much as $60 billion worth of armaments at a time from U.S. defense contractors. This puts Saudi Arabia in a very strong economic position in relation to the United States. Consider the hypothetical consequences of a rapid withdrawal of Saudi funds from the U.S. At the very least this would send the stock market into a tailspin. The U.S. would be forced to freeze Saudi assets, and not only the American and Saudi economies would suffer, but the world economy as well. The Saudis have been known to assert what can only be called economic blackmail against the U.S. government to hide embarrassing facts about themselves, including their dealings with terrorist groups ranging from off-shoots of al-Qaeda to ISIS. They can and do argue that if Saudi agents do at times act against U.S. interests, even to the point of aiding terrorists, they do so as rogue agents and not under the authority the central government. The problem is that, just like America's "rogue" agents, they never seem to suffer punishment. Part III -- Lobby Power The government of Saudi Arabia has gathered together in Washington, D.C., a broad coalition of lawyers, public relations firms, and ex-diplomats-turned-lobbyists that collectively function as a Saudi special interest group. It is through the leverage applied by this lobby that the 28 pages of the 9/11 Commission report stayed below the radar for 12 years. This happened even while the official Saudi line was that that country had nothing to hide and would welcome the publication of the pages. Finally, Barack Obama, drawing near to the end of his presidency, decided to declassify the document. It is possible that he and his advisers, in consultation with the Saudis, had come to the conclusion that after all these years, the U.S.-Saudi relationship could weather any belated disturbance that might result.

Related Topic(s): 28 Pages; 911 Commission; Saudi Embassy; September 11, Add Tags
Add to My Group(s)
Go To Commenting
The views expressed herein are the sole responsibility of the author and do not necessarily reflect those of this website or its editors.