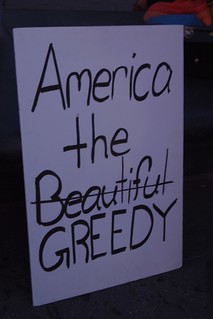 Much of the national debate about widening inequality focuses on whether and how much to tax the rich and redistribute their income downward.

The only way to stop them is to prevent big corporations and Wall Street banks from rigging the market.

For example, Americans pay more for pharmaceuticals than do the citizens of any other developed nation.

That's partly because it's perfectly legal in the U.S. (but not in most other nations) for the makers of branded drugs to pay the makers of generic drugs to delay introducing cheaper unbranded equivalents, after patents on the brands have expired.

This costs you and me an estimated $3.5 billion a year -- a hidden upward redistribution of our incomes to Pfizer, Merck, and other big proprietary drug companies, their executives, and major shareholders.

We also pay more for Internet service than do the inhabitants of any other developed nation.

The average cable bill in the United States rose 5 percent in 2012 (the latest year available), nearly triple the rate of inflation.

Why? Because 80 percent of us have no choice of Internet service provider, which allows them to charge us more.

Internet service here costs three-and-a-half times more than it does in France, for example, where the typical customer can choose between seven providers.

And U.S. cable companies are intent on keeping their monopoly.

It's another hidden upward distribution -- from us to Comcast, Verizon, or another giant cable company, its executives and major shareholders.

Likewise, the interest we pay on home mortgages or college loans is higher than it would be if the big banks that now dominate the financial industry had to work harder to get our business.

As recently as 2000, America's five largest banks held 25 percent of all U.S. banking assets. Now they hold 44 percent -- which gives them a lock on many such loans.

If we can't repay, forget using bankruptcy. Donald Trump can go bankrupt four times and walk away from his debts, but the bankruptcy code doesn't allow homeowners or graduates to reorganize unmanageable debts.

Related Topic(s): Banks; Corporations; Health; Inequality; Market Manipulation; Taxes, Add Tags
Add to My Group(s)
Go To Commenting
The views expressed herein are the sole responsibility of the author and do not necessarily reflect those of this website or its editors.