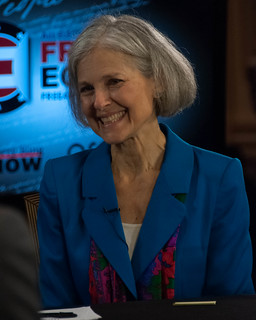 
Part I -- Jill Stein and the Green Party

The presumptive presidential candidate for the U.S. Green Party, Dr. Jill Stein, has long held definite ideas of what the party's position should be on the Israeli-Palestinian conflict. And, despite some past skepticism from Palestinian advocates, Stein's position is, from the progressive point of view, as near perfect as one is likely to get from an American politician. She has stated in a position paper the following:

"United States policy regarding Israel and Palestine must be revised to make international law, peace and human rights ... the central priorities. ... The United States has encouraged the worst tendencies of the Israeli government as it pursues policies of occupation, apartheid, assassination, illegal settlements, blockades, building nuclear bombs, indefinite detention, collective punishment, and defiance of international law. ... We must reset U.S. policy regarding Israel and Palestine, as part of a broader revision of U.S. policy towards the Middle East."

Stein has government actions in mind to make this policy change real, including the withholding of material support and the diplomatic and economic isolation of those who consistently violate human rights and international law. If Stein prevails as the party leader and carries through her position into the party platform, it should be enough to cause every supporter of justice in the Middle East (and in other areas as well, for the party's positions on many issues, domestic and foreign, are consistently progressive) to give serious consideration to supporting the Green Party's national candidates. Certainly the Greens deserve to be on the ballot in every state and have enough supporters to make their candidacy a serious one.

Of course the actual election of the Green Party, with or without Stein, is an unlikely event. Modern American politics has never been congenial for third parties. On a national level the best the U.S. Greens have done was 2.74% of the vote when Ralph Nader ran as their presidential candidate in 2000, a result I will consider more closely below. The mass media gives the party almost no attention and, while the Green Party presidential candidate in 2012, Stein was not invited to any of the televised debates.

Even so, it is interesting to speculate what would happen if American progressives and others rallied around the Green Party and it actually attained power and moved to implement Jill Stein's position paper on the Israeli-Palestinian conflict.

First, we have to mention the actual role of position papers as well as party platforms. They are statements of "what we might do if we had sufficient power." And indeed, it is rare that presidents are elected with such power -- that is, with their party also in control of both houses of Congress. Nonetheless, Stein is a principled person and I have no doubt that, given the opportunity, she would attempt to turn these theoretical positions into practice.

Second, the Green Party president would have to monitor carefully the government bureaucracy attached to the Executive Branch to make sure its leaders actually did what she instructed them to do. This would require a lot of shifting around at the upper levels, where the State Department (including some embassy staff), Department of the Treasury, Department of Defense and some others are staffed with pro-Israeli appointees. After these reassignments are carried through the middle-echelon civil service bureaucrats would probably be fairly reliable and responsive.

Third, the Green Party president would find herself in a battle royal with Congress (assuming the Greens did not take control here too) over questions of aid and structurally created ties with Israel that lay outside of the president's hands. For instance, much of the infamous $3 billion "aid" package given to the Zionist state yearly can only be altered by Congress. I think such a battle, carried out publicly, would be very beneficial for the country as a whole, but it also might end with a Green Party president having to compromise.

The dream of a successful Green Party sounds great and it is heartening that there is actually a political party out there with the courage and wisdom to take a stand for international law, peace and justice. But, given the present political state of things, Jill Stein may run for office, but she really cannot win. And, that sets up the progressive's dilemma -- the question whether, under these circumstances, progressives should actually vote for the Green Party's national ticket candidates.

The dilemma was first made apparent in the year 2000 when Ralph Nader, running for president on the Green Party ticket, got close to 3 million votes. The other two candidates in that race were the Democrat Al Gore and the Republican George W. Bush. The race proved close enough that some have seen Nader's campaign as a "spoiler" drawing off enough otherwise Democratic votes to throw the race to Bush.

Actually, I cannot resolve this dilemma, but I can tell you that it begs the question of why the most reasonable and rational political party, the one with positions that actually deal with both the nation's and the planet's worsening problems, remains at best a marginal player here in the United States.

The answer to this question probably has to do with the way most Americans, confined as they are within their local venues, have been acculturated to see the world -- a range of perception that, over the decades, has melded with the range of propaganda put out by the two major parties. This has left the more rational positions expressed by the Green Party vulnerable to the charge of naive idealism. In other words, most Americans, at least those who bother to vote, see the world through indoctrinated eyes and this makes it psychologically comfortable to vote for Democrats or Republicans even though doing so perpetuates old and deepening problems. Heading off in new directions means going beyond politically conditioned perceptual views. And, even if it is demonstrably more reasonable and promising to do so, such a change causes a lot of discomfort.

So are we stuck in a self-destructive rut here? Quite likely. And, if history acts as a guide, the most likely thing to kick the U.S. out of the rut is catastrophe -- something even worse than the fiascos of Vietnam and Iraq, and the economic time-bombs of ongoing bank scandals. That is a really sad conclusion, especially since such a catastrophe could lead the nation toward the hard right rather than the progressive left. However, it just may be the truth of the matter.

Related Topic(s): Green Party; Israel; Israeli-palestinian; Progressives, Add Tags
Add to My Group(s)
Go To Commenting
The views expressed herein are the sole responsibility of the author and do not necessarily reflect those of this website or its editors.