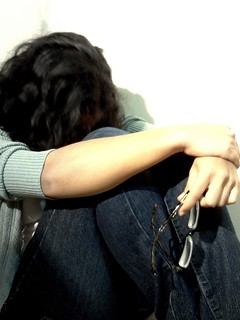 paying the price for war
(Image by Key Foster)   Details   DMCA
>
Our dear Nobel Peace prize winning president has asked congress for a new AUMF-- Authorization for Use of Military Force. WTF, the old one is getting old-- vintage 2001.
Before the chickenhawks and wimps who want to prove they are tough by voting for war-- those are the rare few who are not motivated by the military industrial complex lobbyists and donors-- cavalierly sign off on another war, they should be required to state out loud some of the following statistics.
For every soldier killed in action, two will commit suicide. So triple the projected death count, then add in the ones who die from injuries acquired on an off the battlefield, while in the military. Those deaths should count too.
Thirty percent of veterans seen at the VA have PTSD. It's estimated that as many as 35 percent of Iraq veterans will develop PTSD. One report found that "a large majority of Vietnam Veterans struggled with chronic PTSD symptoms, with four out of five reporting recent symptoms when interviewed 20-25 years after Vietnam." That's 80% suffering from PTSD symptoms.
Experts estimate that 30-35% of veterans come home with closed head trauma.
Almost half of vets were found to binge drink, 20% of them reported binge drinking every week for the past month, in one study.
A handful will go on to become war whores, as members of congress, totally selling themselves to the military industrial complex, becoming spokesmen for more and more war. John McCain is one of the most despicable shameful examples. A tiny few will learn from their military experience and oppose war. It is sick that veterans are loyal to the army and the military and seek to send more innocent young, imbued with American exceptionalism driven patriotism to wars started on lies, where the real motives are profits and power.
We see that war is, for presidential candidates, like a street corner drug, to be dispensed to voters who are feeling helpless, disempowered, without agency. The mostly white, Christian people who embrace these calls for war are not very different from the angry, disempowered, without agency youths who are inspired to jihad.
Maybe the draft should be re-instated. Make people vote to send their children to wars that are highly likely to impair almost all of them. Make parents, even parents of adults who are enlisting, sign off on an informed consent that states that there is an 80% chance their child will come home with PTSD, 30% of chance of head injury, 50% chance of alcoholic symptoms.
Maybe the next AUMF should include in the title Authorization to Use Military Force and Maim Most of the naive volunteers who offer to serve to defend the quickly eroding freedoms the United Corporate States still hold.
Maybe when a young person enlists, he or she should be required to sign a statement saying that he/she has viewed a documentary that has informed him that the risks are so high, it is almost certain he will come home impaired for part or the rest of his life.
Keep in mind that the Bush administration estimated that the Iraq war would cost $50-80 billion dollars. Now the estimates are that it will have costs over three trillion dollars, 30-60 times more. As David Swanson's book title states, War Is A Lie-- and not just one lie, many, many, many lies. Whatever promises a president, his military leaders who are helping him sell the war, and his allies in congress are making-- they are built upon lies and deceptions. History has proven this again and again.
I've left out some very important costs of war. When a nation kills innocent victims, the soul of the nation pays a price. Every citizen holds responsibility for the dead children, mothers and grandparents.
Bottom line, if a president asks for war and a congress considers giving him what he wants, have some rules in place so we do the kind of accounting that we do for fiscal budgets. The price is far higher than we are usually led to believe.

Related Topic(s): Accountability; Peace_War; War Casualties; War Human Cost; War- Cost Of $$, Add Tags
Add to My Group(s)
Go To Commenting
The views expressed herein are the sole responsibility of the author and do not necessarily reflect those of this website or its editors.