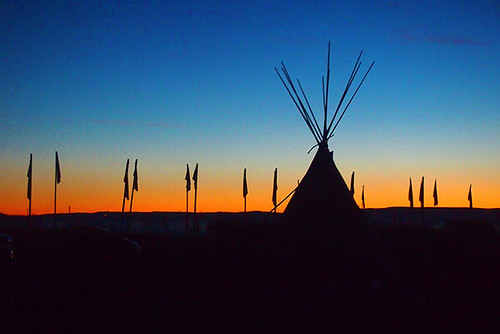 9:45 PM: My airplane landed on time at the Bismarck airport. I went immediately to Enterprise Car which was conveniently located by baggage claim. I had reserved it two weeks previously. The young man at the counter looked at me and my attired, or so it seems.The American flag was sewn upside down on my jacket and I wore a baseball cap with USMC on the front and an eagle feather on the back. He then told me, "I'm so sorry, but we are out of cars."

It was a two hour drive to Standing Rock and snow was on the ground. The airport was closing. I replied, "Would you please write down exactly what you told me along with the date, time, my reservation confirmation number, and then sign your name?" He looked puzzled. "This problem will wind up costing me quite a bit and your company will be responsible."

I pushed a writing table in front of him and suddenly, in a faltering voice, said. "Wait, I think there is one car out there but it is dirty." I told him I would take it. The Jeep Compass wasn't dirty at all.

7:30 A.M.: I left the Bismarck hotel with, Jules, a Veteran for Peace colleague, and drove to the main camp. There were five times more people and cars and dwellings than when I was here a month ago. I decided to stay at the gym at Cannonball instead and set up camp after another vet gave me a zero temperature sleeping bag.

11:30 A.M. A couple of hundred vets out of the 2,000 plus that were part of Wesley Clark, Jr.s' Vets Standing for Standing Rock group, were impatiently waiting for directions while setting up their cots. It seemed no one knew how all the vets were going to get organized yet. Many who had volunteered to participate in "arrestable" front-line actions were anxious about the required training. People informally gathered and some new-comers who had learned that the Indians did not use a strict hierarchy and that Wesley was honoring this, spoke about the importance of peaceful words, behaviors and engagement at all times because it was ultimately love and peace that would prevail.

12:00 A half-hour into the conversations and questions, I jumped in. After all, this is why Wesley wanted me there. I triple-confirmed what was being said and elaborated some details about how if no action at all occurred but people kept praying and sending prayerful intentions out with all the others who had been doing so for months, then there trip here would have been worthwhile. It was easy to tell how desperately the young veterans wanted to help in these spiritual ways and they were very receptive to my words which did not at all sound like they were coming from a Marine officer. I ended with a Lakota prayer.

1:30: I called into Duncan Campbell for a scheduled radio interview but could not get reception. I drove around Cannonball until I got it and reached him about 15 minutes late. He interrupted a pre-recorded interview with Winona LaDuke and patched me in. I expected he wanted a report on what was happening with the veterans but instead, after introducing me he spoke about how the world needs to recognized the need to "demilitarize" its habitual thinking. Then he asked me what I thought. Having just shared words about this with the vets, I was more than ready to reply and told him that the vets had been remarkably engaged in prayerful, respectful intentionality since they arrive the previous day and that if nothing else this would make a difference somehow.

2:20: Wesley and I met in Cannonball after his presentation to troops who had gathered there. We hugged and talked about how spirit was moving things along in a good way.

3:09: Jules and I were driving to Sitting Bull College to look for a designated place for him to camp for the night when he received a text message on our Vets for Peace listserve. He jokingly said, "It is from your FGU student, Brian. He says news just came in the the Army Corps of Engineers has denied DAPL the easement and are calling for a full environmental impact report that requires public input."

Our skepticism caused us to joke about Brian's scholarship somehow being inaccurate but Brian kept sending more from various news stations. By the time we got back to Cannonball, we were yelping with reserved joy. We both knew what Bobby Kennedy said about it being a sure thing such a study would shut down the pipeline. However, we wondered if DAPL would continue clandestinely and illegally with anticipation that the new president of the United States would come to its aid. Or if even if they honored the order, they would buy off the Army somehow or that "President Trump" would find a way to stifle or overturn a legitimate environmental impact report.

When we arrived, everyone was in a state of loving appreciation, but with a look of disbelief in their eyes. Did the Indians really win this time?

Wahinkpe Topa (Four Arrows) is a professor at Fielding Graduate University. Former Director of Education at Oglala Lakota College, he is a made-relative of the Oglala and a Sun Dancer. Selected by AERO for their text Turning Points as one of 27 (more...)
Related Topic(s): Dakota Access Pipeline; Dapl; Norh Dakota Pipeline; North Dakota; North Dakota Lawsuits Standing Rock; Standing Rock; Veterans, Add Tags
Add to My Group(s)
Go To Commenting
The views expressed herein are the sole responsibility of the author and do not necessarily reflect those of this website or its editors.