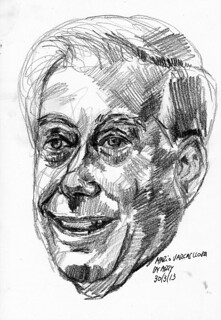 Both men were born and raised in Latin America, but in different countries, and both men come from a Roman Catholic background. However Vargas Llosa reports that he has lost his religious faith. But he is not anti-religion as are many American academics and journalists today, including the African American journalist Ta-Nehisi Coates in his new book BETWEEN THE WORLD AND ME (2015).

In 2012, Vargas Llosa published a short collection of essays in Spanish, which has been published in 2015 in English as NOTES ON THE DEATH OF CULTURE: ESSAYS ON SPECTACLE AND SOCIETY, translated by John King.

In 2015, Pope Francis issued his eco-encyclical. The official Vatican translation into English has been published by Melville House in Brooklyn as ENCYCLICAL ON CLIMATE CHANGE & INEQUALITY: ON THE CARE FOR OUR COMMON HOME, with a helpful introduction by Naomi Oreskes of Harvard University (pages vii-xxiv; with her footnotes on pages 153-154).

Both texts contain sweeping lamentations about our contemporary world -- and jeremiads.

If you were born and raised in Peru, you might understandably be interested in democracy as a form of government and in Karl Popper's ideas about an open society, as Vargas Llosa is.

If you were born and raised in Argentina, you might understandably be concerned about the downtrodden in the dominant capitalist economic system in the world today and its impact on climate change, as Pope Francis is.

As we might expect, the cultivated novelist writes elegant non-fiction prose. Even though Pope Francis is not uncultivated, he does not write elegant prose.

As we might expect, Pope Francis studiously and carefully anchors his eco-encyclical in his church's official teachings -- and in the thought of Fr. Roman Guardini's book THE END OF THE MODERN WORLD (see the pope's footnotes numbered 83, 84, 85, 87, 92, 144, and 154). Nevertheless, the pope explicitly states that he is addressing his eco-encyclical to "all people of good will," not just to practicing Catholics (Paragraph 62).

Vargas Llosa says that the essays in his book are "anchored in the realm of culture, understood not as mere epiphenomenon of social and economic life, but as an autonomous reality, made up of ideas, aesthetic and ethical values, and works of art and literature that interact with the rest of social existence, and that are often not mere reflections, but rather the wellsprings, of social, economic, political and even religious phenomena" (page 14).

Related Topic(s): Advertising; Advertising; Capitalism; Catholic; Climate; Consumerism; Democracy; Ecosystems; Humanities; Literature; (more...) Markets; Novels; Pope Francis; Violence, Add Tags  (less...)
Add to My Group(s)
Go To Commenting
The views expressed herein are the sole responsibility of the author and do not necessarily reflect those of this website or its editors.