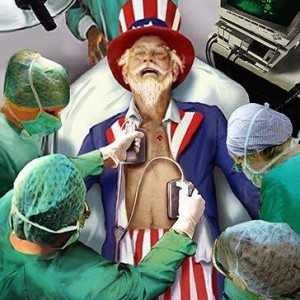 [First published in The Polemicist]

Obamacare is in big trouble. Major insurers--Aetna, Humana, and United Health (the nation's largest)--are pulling out of most exchanges. Remaining companies are seeking double-digit premium increases (at least 25% in 20 different states, some over 60%), while increasingly offering only "narrow network" plans that severely restrict available doctors and hospitals. With these developments, the scam of Obamacare, and its inevitable failure, are becoming too obvious for even the mainstream media to ignore.

The scam of Obamacare was that its main purpose was to ensure, or at least "move toward" healthcare coverage for everyone. Its real primary purpose, however, was to protect and extend the healthcare "market"--the for-profit private health insurance industry and its co-dependent for-profit health delivery system.

Obamacare was not designed to, and does not, provide healthcare to anyone. The subsidies it pays go to health insurance companies; not to doctors or patients. It does not, and cannot, ensure universal healthcare coverage. It can only enhance "access" to healthcare--which means actually forcing everyone to purchase whatever profitable insurance plans the private companies decide to provide, at whatever price they decide to charge.

Of course, this set of priorities is justified, in the minds of neo-liberal elites, by the self-satisfied embrace of the capitalist ideology that "markets" are the best way to provide healthcare (and everything else) to--well, kinda-sorta, asymptotically-approaching, "everyone." And the liberal sector of those neo-liberal elites knew that, to solicit any public support for continuing a system that everyone has come to despise, it was necessary to mask the inevitable failures fine-tune the magical mechanism of the market. So the chiefs of the Presidential Candidates: Selected Industry Totals, 2008 Cycle | OpenSecrets">$3 trillion for-profit healthcare cabal agreed with their favorite (by $3 to $1 over his 2008 opponent) customer representative politician, Obama, to exclude any trace of a public health insurance program, to provide those tens of millions of forced new customers with minimal standards of coverage, and to accept paying customers with pre-existing conditions.

Thus, the Affordable Care Act (ACA), christened Obamacare, was begat. It is--as its Republican ancestry makes clear, and the smartest conservatives understood--based on the capitalist, anti-social imperative to reject the possibility of taking public responsibility for the common good, in favor of insisting on a program of dispersed, "mandated" individual private purchases.

It's also a boondoggle, designed by Obama and the health industry lobbyists who wrote it to save their capitalist industry, the source of their enormous personal wealth. Health insurance CEOs have the highest average compensation of all industries--$21 to $47 million for the top five, once reaching $106 Million. Overall, 77 percent higher than CEOs of financial services companies. Despite these hefty sums going into executive pockets, the industry needed saving because it was in danger of being shut down by a perfect storm of popular rage and unsustainable economic trends. Obamacare was a political and economic bailout for the private health insurance industry, just as his Quantitative Easing was for the despised banks--a way to pour public money into them to keep them afloat, and keep their CEOs' plutocratic incomes flowing.

Furthermore, Obamacare was not a "move toward" anything progressive, let alone "socialist." It was an initiative to divert public and progressive attention from, and prevent political movement toward, the only reasonable and effective alternative -- some form of Medicare for all, which people are literally dying for. And it was not that "the Republicans" blocked poor, frustrated progressive Obama from instituting any kind of public program. The Republicans did not cast a single vote for the ACA and did not block anything. It was Obama himself, in connivance with conservative Democrats like Max Baucus, who nixed any public option. They crafted legislation, as Obama's Health and Human Services Secretary Kathleen Sebelius admitted, "specifically to prevent it from evolving into a single-payer plan." The ACA was designed to obstruct single-payer from ever being considered--as it now is doing. Indeed, in the Democratic primary, we saw Hillary (recipient of over $13 million from the healthcare industry) repeatedly using the ACA as a club to beat down talk of single-payer, which she insists will "never, ever" happen. And we see her establishment Democratic colleagues and Prominent Democratic Consultants Sign Up to Defeat Single Payer in Colorado">consultants fervently working against what could be a ground-breaking single-payer initiative in Colorado.

This is the liberal fiction of the Democrats, generated to maintain their support among left-liberals: that politicians like Obama and the Clintons, no matter what terrible policies they actually institute, are deep-down, forced-into-hiding, progressives, frustrated by Republican intransigence. Whether it's about the ACA or the "Grand Bargain," it's hogwash. In the case of the ACA, this has been amply documented over the years by articles from many commentators, including David Sirota, Glenn Greenwald, and myself. The Democrats don't refuse to fight for single-payer because they can't win it, but because they oppose it. They fight doggedly to win all the time, against strong opposition (usually from the public and the left, whom they consider "f*cking retarded"), for the programs they do support, like the TPP or the war on Syria.

Liberals and lefties who reluctantly went along with the ACA tend to judge its success in terms of its ostensible purpose: whether it can provide decent healthcare coverage for everybody. It's structurally impossible for Obamacare to do that, so they are engaged in constant discussion about which incremental changes have to be made in order to provide a little more coverage for a few more people--until the next election, when we can get a really, really progressive president and win back the House. Because they're all wrapped up in "nothing's perfect" and "don't make the perfect the enemy of the good," and "the Republicans!" yada, yada, they will never give up on this paradigm.

Meanwhile, the insurance companies and the business press focus on what was always the real measure of Obamacare's success: whether it can provide sufficient profitability. The defection of large insurers means that Obamacare is failing in this, always its prime, objective, and, as Sally C. Pipes puts it, for CNBC: the "death spiral" has arrived. It is not--It was never going to be!--the objections of liberal or conservative critics, but the objections, and ultimately the withdrawal, of its founding business partners, that would put an end to Obamacare. The point of this program is to allow the private health insurance companies to make more profits. If they don't, it fails, in its own real capitalistic (as opposed to its ostensible humanitarian) terms. That day has come.

The inevitability of this failure was inscribed in the program's fundamental contradiction: It is impossible to provide universal, affordable, quality healthcare on the condition of satisfying the profit demands of capitalist corporations. The logic of social health and the logic of the market are irreconcilable. As many "retarded leftists" pointed out.

This contradiction has played out in the refusal of healthy folks who don't have oodles of disposable cash to buy the insurance companies' crappy products. As the New York Times explains: "The companies point to a fundamental dynamic in the marketplace in which too few healthy people are buying policies and too many sick people are filing costly claims." How dare they?

But why should healthy people buy expensive policies, when they can wait until they get sick? Maybe they'll have to pay a tax penalty, but that's capped at an amount that will be thousands of dollars less than the premiums (not to mention co-pays and deductibles) of those policies the ACA is trying to force them to buy. (See my analysis of that here.) Do liberal defenders of Obamacare really think that millions of healthy young adults, struggling to pay their student loans, will be persuaded by that nice President they voted for that it's their civic duty to pay an extra $3000-a-year to make sure Joe Swedish (Anthem's CEO) gets his $13 million compensation package? Suddenly, the Ayn-Ranidan every-person-making-his-or-her-own-choices market ideology, which governs the politicians and CEOs, becomes a social-duty ideology for healthy working-class citizens. Thus, liberalism appears.

That actually is the pitch being made, with, the Times points out, "a special emphasis on those turning 26 and moving off their parents' plans," including painfully risible appeals like this: