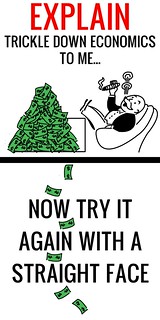 Trickle down economics
(Image by Occupy* Posters)   Details   DMCA
b Bush and Mitt Romney are zeroing in on inequality as America's fundamental economic problem.

Bush's new Political Action Committee, called "The Right to Rise," declares "the income gap is real" but that "only conservative principles can solve it."

Mitt Romney likewise promised last week that if he runs for president he'll change the strategy that led to his 2012 loss to President Obama (remember the "makers" versus the "takers?") and focus instead on income inequality, poverty, and "opportunity for all people."

But they've got a whopping credibility problem, starting with trickle-down economics.

Since Ronald Reagan moved into the White House, Republican policies have widened inequality.

Neither party deserves a medal for reversing the trend, but evidence shows that middle-class and poor Americans have fared better under Democratic presidents.

Under Bill Clinton, in whose administration I am proud to have served, even the wages of the poorest fifth rose.

According to research by economists Alan Blinder and Mark Watson, more jobs have been created under Democratic presidents as well.

These broad-based job and wage gains haven't hampered economic growth. To the contrary, they've fueled it by putting more money into the pockets of people who spend it -- thereby boosting business profits and hiring.

Which is why the economy has grown faster when Democrats have occupied the Oval Office.

I'm not saying Democrats have always had it right or done everything they should. The lion's share of economic gains over the past 35 years has gone to the top regardless of whether Democrats or Republicans inhabit the White House.

The most recent recovery has been particularly lopsided, President Obama's intentions notwithstanding.

Nor can presidents alone determine how the economy performs. At best they orchestrate a set of policies that nudge the economy in one direction or another.

But that's exactly the point: Since Reagan, Republican policies have nudged it toward big gains at the top and stagnation for everyone else.

The last Republican president to deliver broad-based prosperity was Dwight D. Eisenhower, in the 1950s.

Under Ike, the marginal tax rate on the richest Americans reached 91 percent.

Eisenhower also presided over the creation of the interstate highway system -- the largest infrastructure project in American history -- as well as the nation's biggest expansion of public schools.

It's no coincidence that when Eisenhower was president, over a third of all private sector workers were unionized. Ike can't be credited for this but at least he didn't try to stop it or legitimize firing striking workers, as did Ronald Reagan.

Under Reagan, Republican policy lurched in the opposite direction: Lower taxes on top incomes and big wealth, less public investment, and efforts to destroy labor unions.

Not surprisingly, that's when America took its big U-turn toward inequality.

These Reaganomic principles are by now so deeply embedded in the modern Republican Party they've come to define it.

As a matter of fact, they're just about all that unite the warring factions of the GOP -- libertarians, tea partiers, and big corporations and Wall Street.

Yet because these very principles have contributed to the stagnation of American incomes and the widening gap between the rich and everyone else, Republican aspirants who say they want to reverse widening inequality are faced with an awkward dilemma.

How can they be credible on the issue while embracing these principles? Yet if they want to be nominated, how can they not embrace them?

When Jeb Bush admits that the income gap is real but that "only conservative principles can solve it," one has to wonder what principles he's talking about if not these.

And when Mitt Romney promises to run a different campaign than he did in 2012 and focus on "opportunity for all people," the real question is whether he'll run on different economic principles.

That the leading Republican hopefuls recognize the economy has to work for everyone and not just a few is progress.

But unless they disavow the legacy of Ronald Reagan and adopt the legacy of Dwight Eisenhower, their words are nothing more than soothing rhetoric -- akin to George W. Bush's meaningless "compassionate conservatism."

Related Topic(s): Compassionate Conservative; Economic; Economics; Inequality; Republican, Add Tags
Add to My Group(s)
Go To Commenting
The views expressed herein are the sole responsibility of the author and do not necessarily reflect those of this website or its editors.