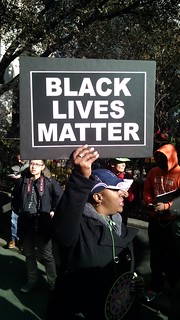 Reprinted from www.dailykos.com, by WriterRedmon

Divide and conquer was the same tactic used during the Occupy movement.

Recent events in Ferguson, a suburb in Saint Louis County, have brought it into the forefront of national news once again. Two officers were shot during a protest on March 11th nearing the midnight hours. Four shots were fired from behind the protestors, leading many to believe that both the protestors and police were potential targets, ultimately striking one officers in the face and another in the shoulder. The shooter is still at large. The officers have survived the attack, and at the time of writing both are resting at home and recovering.

Amidst the current manhunt being conducted, very little evidence has actually surfaced. A few shell casings were found from about 125 feet away from the police line according to Saint Louis County Police Department, and three people were detained for questioning on Thursday and released. The most damming and irrevocable "evidence" in the story came from a press conference with County Police Chief Jon Belmar in which he claims the shooter was "embedded within the protestors" despite video evidence, media coverage, and eyewitness accounts clearly expressing otherwise. Even though the statement was later rescinded in a way by Belmar stating that he is not casting blame on anyone but the shooter, but the problem is that the public opinion has already be set against the protestors by the time the second statement has been released.

Belmar has experience with PR, which means that his statement was likely rehearsed to a point. To put state something unproven at a professional capacity is akin to stating as irrefutable fact and irresponsible at multiple levels. Belmar's statements and the resulting backlash brings to head an issue that is a larger problem in general. National news only saw a story when police officers were shot by an unknown assailant or assailants. They have completely ignored the near-year long activism that has been occurring in Ferguson and surrounding areas, or the movements that have blossomed across America.

The second wave of the 1960's Civil Rights Movement happening across America, and it is being completely shunned by national media. And it is happening on purpose. Either through the ignorance of being unwilling to connect the dots of activism or completely ignoring the profound effect that #BlackLivesMatter has had on people across America and people across the world, the mainstream media has virtually dropped the ball on covering one of the most iconic and eventful movements in recent human history. Ferguson has fallen off the map since the fall of 2014 not because nothing was happening at that point, but because there were no more skirmishes between police and protestors. The decision not to indite Darren Wilson on charges of murder was announced and buildings burned, but it wasn't the Watts riots, so the media went home soon after. The protests, however, did not stop. They were not even swayed by the weather.

While this happened in Ferguson, other places were protesting their own tragedies. There are many names and many places standing up, some not even out of their own personal tragedies but from the overall outrage occurring across the continent. This movement has endured since the 2012 murder of Trayvon Martin, and has only grown since then. There has been multiple actions every month since the murder of Michael Brown, and they continue in conjunction with one another. All this information is on the internet, yet national news outlets are treating each incident as separate cases, given separate airtime, and often times on separate occasions. The disconnect in the media creates a disconnect in the mentality of White Americans, who cannot fathom why protests have been continuing past the point of the indictment process. The problem is that the indictment process has been the same in virtually every case since the Michael Brown case despite the intense outcry to prosecute the officers, and no media outlet is connecting the dots even in speculation or opinion.

In a media format that loves to lump black people into a neat little narrative of what they think and believe based on an individual soundbytes or out of context quotation, they are missing how the "neat little narrative" is being echoed throughout the country. It's a masterfully done job to squelch any really national conversation on why injustices continue to happen to Black people, or why there is such an intense cry for national reform of police officers and in some cases a call for a complete revolt against the entire system. It lends relevance to those who shout down "black lives matter" from misguided attempts at inclusivity("all lives matter"), to blind support of law enforcement ("cop lives matter"), or complete shows of racism and hatred. The media's job is supposed to provide an objective perspective of the events relative to our world, and they are sorely lacking on this particular subject.

Search Google for any claims of this to be the Second Civil Rights Movement, a Black Uprising, or anything that binds the movements together among the media outlets. You will find no articles pertaining to the #BlackLivesMatter movement sweeping the nation. There is no denying that this is indeed historic and of national relevance, both locally and collectively as a national event. While the mainstream media is not needed to recognize that, the fact they outright refuse to do so is a travesty of history and a disservice to the people who have given voice to the voiceless victims of white supremacy and police brutality.