A now somewhat obscure Russian political scientist named Vladimir Lyric Ulyanov lived from 1870 to 1923. (He is rather better known as the leader of the Russian Revolution, by his nom de guerre "Lenin.") Ulyanov was a very prolific writer. In this writer's view, his three most important works were "What is to be Done?" (1902) about the organization, structure, function, and role of a socialist revolutionary party, the remarkably prescient "Imperialism, the Highest form of Capitalism," (1917), and "The State and Revolution" which, among other things, deals with the nature of the state apparatus under capitalism, and also has a lengthy discussion of the role and structure of the state apparatus in a future socialist nation. 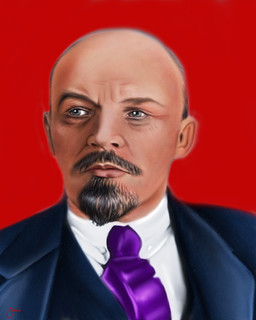 By "state apparatus" is meant all of the institutions, executive, legislative, and judicial, including both the civil and police/military agencies, used for social control, management, and operations in both the "public" and "private" sectors of the economy, that exist in a particular nation. In the United States, as is well known, there are two major political parties, Democratic and Republican, that compete for control of the state apparatus. Most importantly, they compete within certain limits of course, because both parties serve the interests of the ruling class of the U.S. capitalist enterprise. They just offer variations on how to best serve those interests.

It is important to understand that the state apparatus never exists independently of the economic system of the country within which it stands. Rather it is there to make sure that it, the economic system, stays firmly in place. The disagreements between political parties in the capitalist nations come over how best to go about maintaining the ruling class's control, the ruling class being those individuals, corporations, organizations, and interests that have their hands on the levers of economic [and consequently political] power in the nation.

Concerning the nature of "constitutional democracy" under capitalism, Ulyanov himself put it this way:

"[It is there] to decide once every few years which member of the ruling class is to repress and crush the people through parliament -- this is the real essence of bourgeois parliamentarism, not only in parliamentary-constitutional monarchies, but also in the most democratic republics" .

In the United States, as in most developed capitalist nations today, there is this dominant Political Duopoly. Indeed the Democrats and the Republicans do have significant policy differences, but those policy differences are over the question of how to best preserve, protect, and expand capitalism, just as Ulyanov said above. There are also some very significant differences within each of the two major parties about policy and about how they should go about gaining and keeping the levers of power, especially in a nation that has such an incredibly complex system of government. It is complex at the Federal level, with the three supposedly equal branches of government, and it is complex because of the distribution of power and sovereignty between the Federal government and the states. The nature of both distributions has been the subject of constant conflict since the founding the nation in 1789. But again, those conflicts are never over the question of: "might there not be a better system of control of the productive resources in our society that could benefit everyone, not just for the most part those who happen to own the bulk of them."

As we go into the Presidential election season (which, as is well-known, starts earlier every four-year cycle), in my view it is very important to understand what the role and function of the political parties really are, what the election campaigns are really about, with what's going on within both parties in this context. Of course, the Repubs. make such an easy target in these regards, but the Democrats should not be forgotten either. In my view too, in observing the U.S. Political Duopoly it is also important to consider such matters from time-to-time as, Constitutional questions, historical concerns such as the influence of the Southern victory in the Civil War (yes, it did) on the structure and function of our nation today, and the special role, in contrast with every other parliamentary "democracy" in the world today, that religion and its much-more-evil off-spring, organized religion, plays in the politics and governance of the United States, and U.S. foreign policy. If one understands the nature of the state that is found in any nation, it is much easier to understand the party politics of any particular nation.

Steven Jonas, MD, MPH, MS is a Professor Emeritus of Preventive Medicine at StonyBrookMedicine (NY) and author/co-author/editor/co-editor of over 35 books. In addition to his position on OpEdNews as a "Trusted Author," he is a Senior Editor, (more...)
Related Topic(s): Capitalism; Democrats; Duopoly; Political Science; Political Scientists; Political Values; Politics; Republican, Add Tags
Add to My Group(s)
Go To Commenting
The views expressed herein are the sole responsibility of the author and do not necessarily reflect those of this website or its editors.