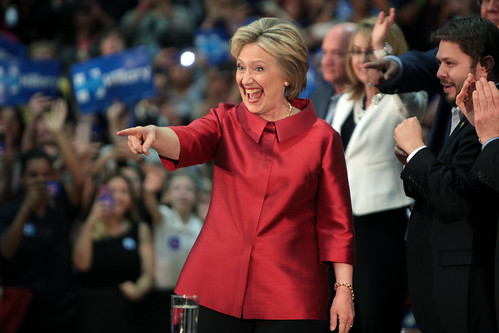 Twenty sixteen was more than just a wake-up call to the Democratic Party. Millions of Americans instead served notice that "enough is enough." We fell short, and I know it hasn't been easy to accept the result.

We knew from the beginning that the system was rigged in favor of the establishment candidate. Closed primaries, super delegates, and ridiculous voter registration laws favored the candidate who knew how to play the game. A better way to say it is the system is set up to favor the campaign that has the most experience and established organization.

Pretty vague way of saying while they didn't have to cheat, the process was set up to make it harder for an insurgent campaign. In state after state Bernie Sanders was starting from scratch. That's just the way it is for a first time candidate, you say. Okay, but usually one candidate doesn't have the whole party establishment in their camp before the race even starts. Hillary Clinton had that advantage, and still got a run for her money.

Everyone talks about the advantage Hillary Clinton had with super delegates. That advantage was deeper than just the super delegates voting for her at the convention. There were other advantages that came with being backed by the party's elected officials. First of all, the way the super delegates were reported in the delegate count from the beginning gave Secretary Clinton an unfair aura of invincibility. No matter how well Bernie did, the media always showed him as hundreds of delegates behind.

More importantly, the super delegates provided organization that was tough to match. Let's look at a state like Illinois. With the endorsements of Dick Durbin, Rahm Emanuel, and scores of other elected officials in the state, Hillary Clinton had access to other political campaign structures that had already identified Democratic Primary voters. While Bernie was establishing his lists, the Clinton campaign had existing lists to work with. Illinois was close because Chuy Garcia threw his weight behind Bernie.

Scott Galindez is a graduate of Syracuse University, a US Army veteran, and currently the Political Director of ReaderSupportedNews.org. Scott's activism began at an anti-nuclear vigil in Lafayette "Peace Park" across from the White House. Scott (more...)
Related Topic(s): Bernie Sanders; Democrats Progressive; Revolution, Add Tags
Add to My Group(s)
Go To Commenting
The views expressed herein are the sole responsibility of the author and do not necessarily reflect those of this website or its editors.