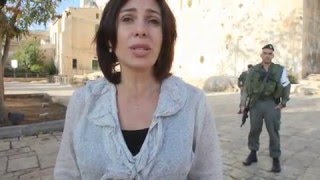 WHAT WILL Donald Trump do if he loses the elections in a week and a half from now, as most polls indicate?

He has already declared that he will recognize the results -- but only if he wins.

That sounds like a joke. But it is far from being a joke.

Trump has already announced that the election is rigged. The dead are voting (and all the dead vote for Hillary Clinton). The polling station committees are corrupt. The polling machines forge the results.

THIS IS not a joke, because Trump represents tens of millions of Americans, who belong to the lower strata of the white population, which the white elite used to call "white trash." In more polite language they are called "blue collar workers," meaning manual workers, unlike the "white collar workers" who occupy the offices.

If the tens of millions of blue collar voters refuse to recognize the election results, American democracy will be in danger. The United States may become a banana republic, like some of its southern neighbors, which have never enjoyed a stable democracy.

The German unemployed voted for Adolf Hitler, who promoted them to the "Herrenvolk" (master people) and the Aryan race. They gave him power, and Germany was razed to the ground.

THE ONE and only Winston Churchill famously said that democracy is a bad system, but that all the other systems tried were worse.

As far as democracy is concerned, the United States was a model for the world. Already in its early days it attracted freedom-lovers everywhere. Almost 200 years ago, the French thinker, Alexis de Tocqueville, wrote a glowing report about the "Democratie en Amerique."

My generation grew up in admiration of American democracy. We saw European democracy breaking down and sinking into the morass of fascism. We admired this young America, which saved Europe in two world wars, out of sheer idealism. The democratic America vanquished German Nazism and Japanese militarism, and later Soviet Bolshevism.

Our childish attitude gave way to a more mature view. We learned about the genocide of the native Americans and about slavery. We saw how America is seized from time to time by an attack of craziness, such as the witch hunt of Salem and the era of Joe McCarthy, who discovered a Communist under every bed.

But we also saw Martin Luther King, we saw the first black President, and now we are probably about to see the first female President. All because of this miracle: American democracy.

Related Topic(s): Arab; Immigrants; Israeli Government; Israeli Intransigence; Likud, Add Tags
Add to My Group(s)
Go To Commenting
The views expressed herein are the sole responsibility of the author and do not necessarily reflect those of this website or its editors.