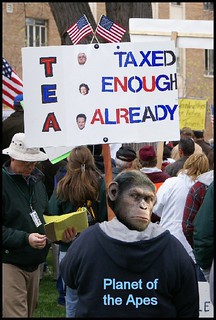 Rep. Randy Weber (R-Texas), like many Americans, was upset that President Obama did not go to Paris to personally show his solidarity with France, and publicly mourn the 12 journalists and the four French citizens killed in terrorist attacks.

Like many Americans, both liberal and conservative, Rep. Weber made his views publicly known. However, he crossed the line of decency when he tweeted, "Even Adolph Hitler thought it more important than Obama to get to Paris. (For all the wrong reasons.) Obama couldn't do it for the right reasons."

The response to the tweet led Weber to issue a retraction and apology. "I now realize that the use of Hitler invokes pain and emotional trauma for those affected by the atrocities of the Holocaust and victims of anti-Semitism and hate," he said in his official apology.

As comparison attacks go, Weber's was not the most offensive. Six years into Barack Obama's eight-year presidency, others have directly linked him to Hitler. In Tea Party rallies, it isn't unusual to find pictures of the President with a Hitler-like mustache. On uncountable messages and rants posted in social media or written for online and print media, the reactionary right wing call the President a dictator, a fascist, and a Nazi.

When they're not comparing the President to Hitler, they say he isn't a citizen. Apparently, they believe Hawaii is a foreign country. They fail to recognize that his mother was a U.S. citizen, making Obama an American. They called for his birth certificate. And so he showed a birth announcement from a Hawaiian newspaper and a long-form birth certificate--which they promptly dismissed as fraudulent. But, the only fabrication was a fake Kenyan birth certificate, widely accepted by the right-wing but easily proven to be a fraud. Nevertheless, with flimsy evidence, they filed suits to get his election victories thrown out, claiming he was really born in Kenya. However, every court has thrown out the suits filed by the "birthers."

When not challenging his birth, they have called him a Muslim, stressing his middle name "Hussein" as evidence and slyly trying to tie him to the now-deceased Iraqi dictator. But, the right-wing, clinging to the flag and the Constitution, desecrate the former by not understanding the latter. Even if President Obama is a Muslim, he could be president. He could also be a Jew, a Hindi, a Heathen, or an atheist. The Constitution specifically allows anyone who is an American citizen, over the age of 35, and who lived in the U.S. for at least 14 years to be president. A person's religion--or lack of one--has no basis to deny a person the Constitutional right of the presidency.

Many, with no proof other than what they hear on right-wing talk radio, have called him an Arab, stupidly believing that the worst thing is to be an Arab Muslim born in Kenya. Believing that also deflects criticism that they are attacking the President for being Black.

Even being an Arab Muslim Kenyan dictator isn't good enough. And so, they dig into the Cold War era, toss in "Commie" and "Pinko," and then sprinkle it with "socialist." Of course, that would make him the only Muslim socialist in the world, a distinction so ludicrous that would bring tears of laughter to the terrorists of al-Qaeda and ISIS.

When not attacking the President, the right-wing attacks liberals, who are believed to be the earthly incarnation of the Devil. To the extreme right-wing, liberals are DemocRATS, DIMocrats, and libtards. The left-wing merely shakes their heads at such juvenile terminology.

President Obama and his party aren't the only ones who have been attacked in history.

During the first decades after the Revolutionary War, the Federalists and Anti-Federalists were vicious in their attacks upon each other. "If ever a nation was debauched by a man, the American nation has been debauched by Washington," wrote Benjamin Franklin Bache editor of the widely-read Aurora. In retaliation, Federalists destroyed the Aurora office and beat Bache, Franklin's grandson. The Federalists, uniting behind Alexander Hamilton and John Adams, and the Anti-Federalists, uniting behind Thomas Jefferson, spewed lies and hate, often through newspapers.

The 1828 presidential election put incumbent John Quincy Adams against Andrew Jackson. Mudslinging by supporters of each candidate continued to drag the four-decade old country into a deeper campaign war of name-calling and personalities rather than ideas.

Abraham Lincoln--another tall skinny president--was called a monkey, and portrayed in numerous editorial cartoons as an ape. Franklin Delano Roosevelt, born into a WASP culture, was demonized as a "secret Jew," with his critics emphasizing his name as "Roo-sevelt." Protestant candidates vilified Catholic opponents; Catholics maligned Protestants. And everyone despised the Jews and other minorities.