My first book, Fooling America, examined Washington's excited "conventional wisdom" around the Persian Gulf War of 1990-91 when nearly the entire political-punditry elite was thrilled about bombing the heck out of Iraq, inflicting heavy civilian casualties in Baghdad and slaughtering tens of thousands of Iraqi soldiers as they fled from Kuwait.

Ironically, one of the few dissenters from this war-lust was right-wing commentator Robert Novak, who actually did some quality reporting on how President George H.W. Bush rejected repeated peace overtures because he wanted a successful ground war as a way to instill a new joy of war among the American people.

Bush recognized that a brief, victorious ground war would -- in his words -- "kick the Vietnam Syndrome once and for all," i.e., get Americans to forget their revulsion about foreign wars, a hangover from the bloody defeat in Vietnam.

So Novak, the anti-communist hardliner who often had baited other pundits for their "softness" toward "commies," became on this occasion a naysayer who wanted to give peace a chance. But that meant Novak was baited on "The Capital Gang" chat show for his war doubts.

To my surprise, one of the most aggressive enforcers of the pro-war "group think" was Wall Street Journal Washington bureau chief Al Hunt, who had often been one of the more thoughtful, less warmongering voices on the program. Hunt dubbed Novak "Neville Novak," suggesting that Novak's interest in avoiding war in the Middle East was on par with British Prime Minister Neville Chamberlain's appeasement of Adolf Hitler before World War II.

Months later when I interviewed Hunt about his mocking of Novak's anti-war softness, Hunt justified his "Neville Novak" line as a fitting rejoinder for all the times Novak had baited opponents for their softness against communism. "After years of battling Novak from the left, to have gotten to his right, I enjoyed that," Hunt said.

At the time, I found this tit-for-tat, hah-hah gotcha behavior among Washington's armchair warriors troubling because it ignored the terrible suffering of people in various countries at the receiving end of American military might, such as the Iraqi civilians including women and children who were burned alive when a U.S. bomb penetrated a Baghdad bomb shelter, as well as the young Iraqi soldiers incinerated in their vehicles as they fled the battlefield.

In the 100-hour ground war, U.S. casualties were relatively light, 147 killed in combat and another 236 killed in accidents or from other causes. "Small losses as military statistics go," Gen. Colin Powell wrote later, "but a tragedy for each family." In Official Washington, however, the dead were a small price to pay for a "feel-good" war that let President Bush vanquish the psychological ghosts of the Vietnam War.

I also had the sickening sense that this "popular" war -- celebrated with victory parades and lavish firework displays -- was setting the stage for more horrors in the future. Already, neoconservative pundits, such as The Washington Post's Charles Krauthammer, were demanding that U.S. forces must go all the way to Baghdad and "finish the job" by getting rid of Saddam Hussein. A dangerous hubris was taking hold in Washington.

As we have seen in the decades since, the euphoria over the Persian Gulf victory did feed into the imperial arrogance that contributed to the invasion of Iraq in 2003. At that moment, when the neocons in George W. Bush's administration were concocting excuses for finally marching to Baghdad, there were almost no voices among the big-shot commentators who dared repeat Robert Novak's "mistake" of 1991.

I mention all this now because we are seeing something similar with the Democrats as they lead the charge into a dangerous New Cold War with Russia. The Democrats, who bore the brunt of the Red-baiting during the earlier Cold War, are now playing the roles of Senators Joe McCarthy and Richard Nixon in smearing anyone who won't join in the Russia-bashing as "stooges," "traitors" and "useful idiots." 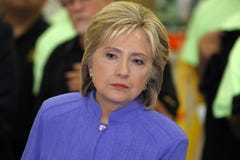 When Republican presidential nominee Donald Trump has one of his few lucid moments and suggests that the U.S. should cooperate with Russia rather than provoke more confrontations, he is denounced from many political quarters. But the attacks are most feverish from Democrats looking to give Hillary Clinton a boost politically and a diversionary excuse for her Wall Street speeches that she tried so hard to keep hidden until they were released by WikiLeaks from hacked emails of her longtime adviser John Podesta.

Related Topic(s): Democrats; Election; Putin; Wars, Add Tags
Add to My Group(s)
Go To Commenting
The views expressed herein are the sole responsibility of the author and do not necessarily reflect those of this website or its editors.