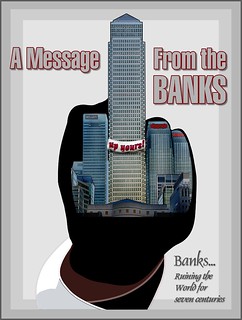 A Message from the Banks
(Image by Byzantine_K)   Details   DMCA
>

The U.S. economy is picking up steam but most Americans aren't feeling it. By contrast, most European economies are still in bad shape, but most Europeans are doing relatively well.

What's behind this? Two big facts.

First, American corporations exert far more political influence in the United States than their counterparts exert in their own countries.

In fact, most Americans have no influence at all. That's the conclusion of Professors Martin Gilens of Princeton and Benjamin Page of Northwestern University, who analyzed 1,799 policy issues -- and found that "the preferences of the average American appear to have only a miniscule, near-zero, statistically non-significant impact upon public policy."

Instead, American lawmakers respond to the demands of wealthy individuals (typically corporate executives and Wall Street moguls) and of big corporations -- those with the most lobbying prowess and deepest pockets to bankroll campaigns.

The second fact is most big American corporations have no particular allegiance to America. They don't want Americans to have better wages. Their only allegiance and responsibility to their shareholders -- which often requires lower wages to fuel larger profits and higher share prices.

When GM went public again in 2010, it boasted of making 43 percent of its cars in place where labor is less than $15 an hour, while in North America it could now pay "lower-tiered" wages and benefits for new employees.

American corporations shift their profits around the world wherever they pay the lowest taxes. Some are even morphing into foreign corporations.

As an Apple executive told The New York Times, "We don't have an obligation to solve America's problems."

I'm not blaming American corporations. They're in business to make profits and maximize their share prices, not to serve America.

But because of these two basic facts -- their dominance on American politics, and their interest in share prices instead of the wellbeing of Americans -- it's folly to count on them to create good American jobs or improve American competitiveness, or represent the interests of the United States in global commerce.

By contrast, big corporations headquartered in other rich nations are more responsible for the wellbeing of the people who live in those nations.

That's because labor unions there are typically stronger than they are here -- able to exert pressure both at the company level and nationally.

VW's labor unions, for example, have a voice in governing the company, as they do in other big German corporations. Not long ago, VW even welcomed the UAW to its auto plant in Chattanooga, Tennessee. (Tennessee's own politicians nixed it.)

Governments in other rich nations often devise laws through tri-partite bargains involving big corporations and organized labor. This process further binds their corporations to their nations.

Meanwhile, American corporations distribute a smaller share of their earnings to their workers than do European or Canadian-based corporations.

And top U.S. corporate executives make far more money than their counterparts in other wealthy countries.

And because of the overwhelming clout of American firms on U.S. politics, Americans don't get nearly as good a deal from their governments as do Canadians and Europeans.

Governments there impose higher taxes on the wealthy and redistribute more of it to middle and lower income households. Most of their citizens receive essentially free health care and more generous unemployment benefits than do Americans.

So it shouldn't be surprising that even though U.S. economy is doing better, most Americans are not.

The U.S. middle class is no longer the world's richest. After considering taxes and transfer payments, middle-class incomes in Canada and much of Western Europe are higher than in U.S. The poor in Western Europe earn more than do poor Americans.

Which is why the pending Partnership protects the intellectual property of American corporations -- but not American workers' health, safety, or wages, and not the environment.

The Obama administration is casting the Partnership as way to contain Chinese influence in the Pacific region. The agents of America's interests in the area are assumed to be American corporations.

But that assumption is incorrect. American corporations aren't set up to represent America's interests in the Pacific region or anywhere else.

What's the answer to this basic conundrum? Either we lessen the dominance of big American corporations over American politics... Or we increase their allegiance and responsibility to America.

It has to be one or the other. Americans can't thrive within a political system run largely by big American corporations -- organized to boost their share prices but not boost America.

Related Topic(s): Corporations; National Debt; National Debt -Trade Deficit; Politics, Add Tags
Add to My Group(s)
Go To Commenting
The views expressed herein are the sole responsibility of the author and do not necessarily reflect those of this website or its editors.