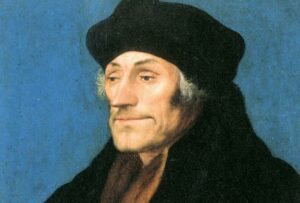 Erasmus
(Image by WorldBeyondWar.org)   Details   DMCA
I'm afraid that one of the best books I've read on war abolition may be overlooked by non-Catholics, because its title is Catholic Realism and the Abolition of War (by David Carroll Cochran). The book does draw on Catholic arguments against war and work to rebut Catholic arguments in favor of war, but in my view this enriches the debate and detracts not at all from Cochran's universal argument for the elimination of all war -- much of which has little or nothing to do with Catholicism. I've added this book to my war abolition shelf along with these books of my own and others:

"War's two great lies are its righteousness and its inevitability." Thus begins Cochran's book, and he demonstrates the truth of his statement beyond any reasonable doubt. He examines the lies that are told to start wars and the lies that are told about how wars are conducted. We might call these two kinds of lies mendacia ad bellum and mendacia in bello. Cochran puts a major emphasis on the latter, pointing out that war kills a large number of innocents -- and always has, even in earlier epochs armed by very different weaponry. There never was any just ad bellum or jus in bello.

Cochran includes among the innocent both civilians and soldiers. Including only civilians is enough to make his point, as wars have always killed large numbers of civilians (though the percentage of dead who are civilian has increased in recent decades to the point where it is the vast majority of those killed). Cochran does not consider soldiers innocent because their side of a war is defensive. He considers them innocent on the side of the aggressor as well -- and not only those soldiers who quietly regret what they are doing or those who honestly believe the propaganda that would justify their actions. No, even combatants who fully support the war are innocent, in a certain sense, in Cochran's view.

This seems at odds with some Catholic tradition. I remember Erasmus urging that clergy refuse to bury in consecrated ground anyone slain in battle: "The unfeeling mercenary soldier, hired by a few pieces of paltry coin, to do the work of man-butcher, carries before him the standard of the cross; and that very figure becomes the symbol of war, which alone ought to teach every one that looks at it, that war ought to be utterly abolished. What hast thou to do with the cross of Christ on thy banners, thou blood-stained soldier? With such a disposition as thine; with deeds like thine, of robbery and murder, thy proper standard would be a dragon, a tiger, or wolf!"

I find Cochran's case for soldiers' innocence convincing, although I have really very little interest in whether his position is more properly Catholic than someone else's. He points out that it is generally viewed as wrong to kill soldiers who are wounded or surrendering. This, Cochran writes, is because they have done nothing to deserve being slaughtered, although slaughtered they are in the general course of a war. One idea put forward by war supporters is that in the normal course of war, soldiers are mutually engaged in self-defense against each other, but Cochran points out that the justification of self-defense for individuals outside of war only works when an aggressor has attacked a victim. War is conducted on a very different scale and with very different norms. Soldiers during a war are not expected to try all nonviolent approaches first before resorting to violence, and in fact routinely kill other soldiers who do not pose any imminent threat. Most killing in historical battles has happened after one side has begun retreating. Remember how the United States killed 30,000 retreating Iraqi soldiers during the 1991 Gulf War.

The ultimate fallback justification for the mass-murder of war is that innocents can be slaughtered if the harm done is outweighed by the goals of the war. But such goals are often secret or lied about, and it is the war makers who get to decide whose deaths are outweighed by what goals. U.S. terrorist Timothy McVeigh blew up a government building in 1995 and claimed that the deaths that resulted were merely "collateral damage" because killing those people had not been his purpose. The U.S. military plays the same game, the only difference being that it is allowed to get away with it.

Partly the military gets away with it by constantly claiming to have found technological solutions to collateral damage. But, in fact, the latest such ploy -- weaponized drones -- kills more civilians than it kills people for whom anyone asserts any (always unsubstantiated) right to murder.

To call combatants innocent in analyzing the morality of war is not, in my view, to diminish the moral superiority of refusing to fight. Nor is it to suggest some sort of moral perfection in the individual lives of soldiers. Nor is it to set aside the Nuremberg standard that requires disobeying illegal orders. Rather, it is to understand that no justification exists for killing soldiers. There might be a justification for otherwise sanctioning their behavior, and -- more so -- the behavior of those who sent them into war, but not for killing them.

Not only is war dramatically different from normal individual relations in which one might speak of self-defense, but, Cochran shows, it is also radically different from police work. Legitimate, praiseworthy police work seeks to reduce and avoid violence. It targets people based on suspicion of wrongdoing unique to the individual targeted. It seeks to facilitate the work of courts of law. War, on the contrary, seeks to maximize violence, targets entire armies and populations, and pauses not for any court rulings but sees two sides each declare the other guilty en masse. Calling a war a "police action" or giving soldiers actual policing duties does not change the fact that war is not policing. While good policing creates "order," war creates violence, chaos, and instability.

The moral arguments of the first part of Catholic Realism and the Abolition of War are excellent, but the real high point of the book may be its review of past institutions of mass violence that were considered moral, natural, inevitable, and permanent, but which are now gone. You'll find this case sketched out in most of the books listed at the top of this article, but Cochran does the best job of it I've seen. He includes discussions of dueling and slavery, but also the less commonly used examples of trial by ordeal and combat, and lynching.

In some ways, trial by ordeal and combat is the best example because the most dependent, as is much of war, on the actions of a government, albeit local level governments in many trial-by-ordeal-and-combat cases. While rulers understood that trial by ordeal and combat did not actually produce the truth it claimed, they went on using it for many years as they found doing so convenient. Catholics produced complex justifications for it, similar to those produced by "just war" theory. Trial by ordeal and combat was deemed moral and necessary for self-defense, protecting the innocent, and creating peace and stability. Gradually cultural and political changes ended the supposedly un-endable.

Dueling's supporters also believed it necessary, and eliminating it naive and dreamy. They claimed that dueling maintained peace and order. Cultural and political change brought majorities to consider dueling laughable, barbaric, ignorant, shameful, and a threat to peace and order.

Slavery, in the form that has virtually vanished, rested on fundamental lies and contradictions, including recognizing and not recognizing the humanity of those enslaved. It also rested on "just war" theory which maintained that slavery was a generous alternative to the mass-murder of conquered peoples. As humanitarian warriors claim that wars are for the benefit of their victims, defenders of slavery claimed that it benefitted the people held captive. As war supporters today claim that it maintains a way of life that is by definition greedy and unfair, supporters of slavery contended that it was essential to the existing way of life of the slave owners.

Interestingly, Cochran stresses that the evidence shows the demise of chattel slavery not to have been driven by any economic forces but rather by a moral revolution. Just before slavery was ended, it was extremely profitable. But, writes Cochran, "globally minded political and economic elites came to see slavery as an embarrassing deviation from international norms."

Lynching may not have been exactly legal, but it was an established institution, and the arguments used to maintain it closely resemble the fallacious claims made about other institutions of violence. Lynching, its supporters said, was defensive, defending the white race through an inevitable "racial instinct." They believed, however, that it should be used as a "last resort." That is, they believed that, until they gradually didn't any longer believe it, until lynching gradually became seen, not as a defense of but as a threat to law and order.

David Swanson is the author of "When the World Outlawed War," "War Is A Lie" and "Daybreak: Undoing the Imperial Presidency and Forming a More Perfect Union." He blogs at http://davidswanson.org and http://warisacrime.org and works for the online (more...)
Related Topic(s): Books; Catholic; Peace; Peace; Wars, Add Tags
Add to My Group(s)
Go To Commenting
The views expressed herein are the sole responsibility of the author and do not necessarily reflect those of this website or its editors.