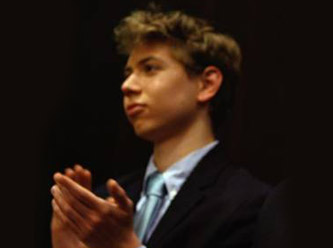 The first mu'ezzin stood on the roof of the prophet Muhammad's home in Medina, during his exile from Mecca, and called the believers to prayer. He also walked along the streets, doing the same.

When Islam became the established religion, minarets were built. Their original purpose was to ventilate the mosque, letting the hot air out and thus drawing the cooler air in. The mu'ezzin climbed to the top and intoned the 'azzan, the call to prayer. Often a blind man was chosen, so he could not look into the homes below.

The word is closely connected with the biblical and modern Hebrew word "ha'azinu" ("listen").

Lately, electric loudspeakers make the job of the mu'ezzin much easier. Nowadays, he can sit below and use a microphone. If a recording is used, the mu'ezzin becomes altogether superfluous.

Anyway, the voice of the mu'ezzin must come forth five times a day and call the believers to prayer, which is one of the five pillars of Islam.

The first call is sent out before dawn. And there's the rub, as Hamlet would have said, if there had been minarets in Denmark in his time.

SINCE PALESTINE was conquered by the army of the Khalif Omar in the year 636 A.D., the voice of the Mu'ezzin has been heard five times a day in most of the country's towns and villages. (Some Arabs villages remained Christian and sounded bells.)

No more, if Yai'r Netanyahu has his way.

Yair (25) is the crown prince in Israel's royal family. He is the darling of his assertive mother and walks around with four bodyguards paid for by the taxpayer (me). He seems to be a nice if nondescript person. He loves nightclubs and luxury. He also likes his sleep.

But how can one sleep in Jerusalem if a nearby mu'ezzin wakes one up at 4 o'clock in the morning?

This is not only Ya'ir's problem. Many Jews in Israel live near mosques, especially in mixed towns like Jerusalem, Haifa and Jaffa. The mu'ezzin wakes them up in the middle of their sweetest dreams, just when the beautiful maiden is about to give in (or vice versa for women). They may be furious, but they know that they can do nothing about it.

He has induced his father to propose a bill that would forbid the use of loudspeakers in all houses of worship. When the powerful Jewish orthodox faction protested, since this would also forbid the call to Shabbat, the bill was amended and now mentions mosques specifically. This may be annulled by the Supreme Court on grounds of discrimination. In the meantime, Ya'ir is still aroused from his precious sleep.

Related Topic(s): Arab; Israel; Mosque; Palestinian; Rights, Add Tags
Add to My Group(s)
Go To Commenting
The views expressed herein are the sole responsibility of the author and do not necessarily reflect those of this website or its editors.