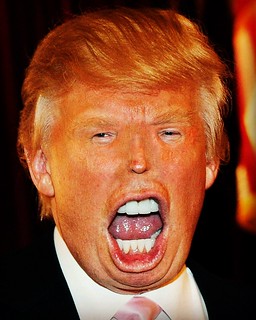 Savannah State University in Georgia will offer a three-credit course this summer, "The Trump Factor in American Politics." The professor is Dr. Robert Smith, who says the students will read Trump's policy statements and excerpts from Trump's books, and then discuss his political philosophies.

Many people may believe this is a terrible waste of any student's mind and tuition payments. Some may even claim there are other courses that have higher value in the American educational system. For example, Rutgers offers "Politicizing Beyonce," Skidmore College offers "The Sociology of Miley Cyrus," the University of Missouri offers a class to better understand Kanye West and Jay Z, and hundreds of colleges have courses that look at the lives and views of strange people known as philosophers.

To understand Donald Trump, who may be the greatest political philosopher in recorded history, is as critical to understanding America's future as it is to understanding the motivations and philosophies of the creature from the black lagoon.

First, it is important to realize that Trump has gone beyond Freud in understanding the human mind. The father of psychoanalysis said the psyche has three parts--id, ego, and superego. Trump added The Donald as the fourth part, one level greater than the superego.

Milton, Locke, and Mill believed mankind is rational and capable of great thought. Plato, Hobbes, and Machiavelli believed mankind is selfish and incapable of rational thought; they believed in the presence of a strong ruler to explain to the masses how wrong they are about the world and their own despicable lives. Trump, of course, the political genius he is, merged the two opposing philosophies--he listens to the far-right and usually-wrong masses, tells them what they want to hear, and then plans to subjugate them to the power and wisdom of Trumponian Law, a variation of Bentham's philosophy of utilitarianism, which has humans weighing the good against the bad, and then selecting the good. Trump, of course, believes the Greater Good, a Trump theocracy, will always outweigh all other considerations.

Another basic tenet in the Philosophy of Trump is that the affluent, with full access to all parts of the elite power establishment, lure the disgruntled masses to believe the philosopher-king, who claims to be an outsider, is one of them, thus solidifying the political base to rule and suppress the masses by continually flaunting his own superior knowledge of the universe.

Most post-18th century philosophers believe ethics results from the rational mind, something not many Fortune 500 CEOs believe. Trump, as he explained in his major philosophical thesis, The Art of the Deal, believes all decisions do not come from the head or the heart, or from decency and a sense of justice, but must come from the gut. This is why he plans to make haggis and sausage the national dish after November.

While pandering to the mass psyche, Trump believes in the divine right of kings, of which he is fairly sure he has been anointed by whatever god he currently has created. Thus, we can look forward to a new age of enlightenment, under the reign of Donald the One. There is no evidence he will select a vice-president since kings don't have vice-kings. They do have courtiers.

Trump's advisor on the climate and energy is super-conservative Rep. Kevin Cramer (R-N.D.), who believes in fracking and doesn't believe most scientists who say there is climate change. For his health advisor, Trump selected Ben Carson, a surgeon who doesn't believe in evolution.

Chinese philosopher Confucius believed political unity and stability must be at the core of any government. For most of his campaign to be king, Trump didn't care about unifying anything; Trump's philosophy is to upset DesCartes. But, the closer he gets to the coronation, the more he wants unity; his belief is that all elements of the universe must now unify behind his wisdom and power.

Most dictator-kings develop a powerful military to protect their kingdom's borders and to instill fear and compliance in their subjects. However, Trump has shown his wisdom by calling for more military while also calling for a lesser military, and then keep the military wondering about his sanity. His first attack was to declare that Navy pilots confined in enemy prison camps weren't heroes. But, since America needs heroes, he plans to keep America in a constant state of war, mostly to justify increased spending for private business. Just in case the military decides that a four-year war isn't good for anyone's health and safety, Trump plans to destabilize the Veterans Administration by selling it off to private enterprise. (He also plans to sell off the national parks and forests to private enterprise, which would allow hunters to kill off all wolves, while neutralizing CNN's Wolf Blitzer.)

Trump wants to get the U.S. out of the UN and NATO, which almost every responsible politician and military commander says would destabilize the world. Sen. John McCain, a retired Navy captain, claims Trump is "uninformed and dangerous" when it comes to foreign policy and national security. Sen. Lindsey Graham, a retired Air Force colonel, says Trump's philosophy is "gibberish." None of this should detract from the reality that great minds, like the alchemists who turned lead into gold, may know more than all foreign policy experts.