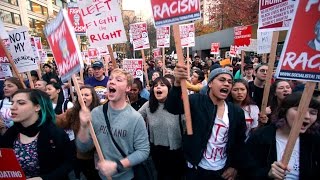 "Reform always provokes rage on the part of those who profit by the old order." ~~ Arthur M. Schlesinger, Jr., The Crisis of the Old Order

Who are the anti-Trump protesters besmirching the name of progressives by pretending to be progressives and by refusing to accept the outcome of the presidential election? They look like, and are acting worse than, the "white trash" that they are denouncing.

I think I know who they are. They are thugs for hire and are paid by the Oligarchy to delegitimize Trump's presidency in the way that Washington and the German Marshall Fund paid students in Kiev to protest the democratically elected Ukrainian government in order to prepare the way for a coup.

The organization, change.org, which claims to be a progressive group, but might be a front, along with other progressive groups, for the Oligarchy, is destroying the reputation of all progressives by circulating a petition that directs the electors of the Electoral Collage to annul the election by casting their votes for Hillary. Remember how upset progressives were when Trump said he might not accept the election result if there was evidence that the vote was rigged? Now progressives are doing what they damned Trump for saying he might do under certain conditions.

The Western presstitutes used the protests in Kiev to delegitimize a democratically elected government and to set it up for a coup. The protest pay was good enough that non-Ukrainians came from nearby countries to participate in the protest in order to collect the money. At the time I posted the amounts paid daily to protesters. Reports came in to me from Eastern and Western Europe from people who were not Ukrainian but were paid to protest as if they were Ukrainians.

The same thing is going on with the Trump protests. CNN reports that "for many Americans across the country, Donald Trump's victory is an outcome they simply refuse to accept. Tens of thousands filled the streets in at least 25 US cities overnight." This is the exact reporting that the Oligarchy desired from its presstitutes, and got.

I hope no one thinks that simultaneous protests in 25 cities were a spontaneous event. How did 25 independent protests manage to come up with the same slogans and the same signs on the same night following the election?

What is the point of the protests, and what interest is served by them? As the Romans always asked, "who benefits?"

Trump is a threat to the Oligarchy, because he intends to stop the giveaway of American jobs to foreigners. The jobs giveaway, sanctified by the neoliberal junk economists as "free trade," is one of the main reasons for the 21st century worsening of the US income distribution. Money that was formerly paid in middle class wages and salaries to American manufacturing employees and college graduates has been re-routed to the pockets of the One Percent.

When US corporations move their production of goods and services sold to Americans offshore to Asian countries, such as China and India, their wage bill falls. The money formerly paid in middle class incomes goes instead into executive bonuses and dividends and capital gains to shareholders. The ladders of upward mobility that had made America the land of opportunity were dismantled for the sole purpose of making a handful of people multi-billionaires.

Trump is a threat to the Oligarchy, because he intends peaceful relations with Russia. In order to replace the profitable Soviet Threat, the Oligarchy and their neoconservative agents worked overtime to recreate the "Russian Threat" by demonizing Russia.

Accustomed to many decades of excess profits from the profitable Cold War, the military/security complex was angry when President Reagan brought the Cold War to an end. Before these leaches on American taxpayers could get the Cold War going again, the Soviet Union collapsed as a result of a right-wing coup against Soviet President Mikhail Gorbachev.

The military/security complex and their Zionist neoconservative agents cooked up "the war on terror" to keep the money flowing to the One Percent. But as hard as the presstitute media worked to create fear of "the Muslim threat," even insouciant Americans knew that the Muslims did not have thousands of ICBMs carrying powerful thermo-nuclear weapons capable of destroying the entirety of the United States in a few minutes. Neither did the Muslims have the Red Army capable of overrunning all of Europe in a couple of days. Indeed, the Muslims haven't needed an army. Refugees from Washington's wars enabled by Europeans are overrunning Europe.

The excuse for the annual trillion dollar ($1,000 billion ) military/security budget was missing. So the Oligarchy created "the New Hitler" in Russia. Hillary was the Oligarchy's principle agent for heating up the new Cold War.

Related Topic(s): Anti-trump; Coup; Donald Trump; Hillary Clinton; Oligarchy; Presidency; Protest, Add Tags
Add to My Group(s)
Go To Commenting
The views expressed herein are the sole responsibility of the author and do not necessarily reflect those of this website or its editors.