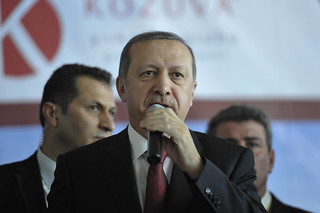 A massive apparent terror attack in Turkey's capital comes at a crucial time just when the Erdogan government is trying to woo Washington's support for its military intervention in Syria.

The Turkish capital Ankara on Wednesday was hit with a deadly car bomb outside its military headquarters. Reports put the dead at 28 with more than 60 injured in what appears to have been a highly sophisticated attack during evening rush hour.

The powerful blast went off just as two buses ferrying military personnel stopped at traffic lights outside the army headquarters at a busy intersection which is also near ministerial and parliament buildings. This part of the capital is normally kept under tight security.

The Turkish military have been shelling YPG units across the border in northern Syria. Erdogan and Davutoglu had issued several statements prior to the Wednesday bombing in Ankara denouncing the YPG as "terrorists" owing to their links to separatist Kurdish militants in Turkey belonging to the PKK.

This was at least the fourth major apparent terror attack inside Turkey over the past seven months. In January this year, a suicide bomber killed 10, mainly German tourists, in the city of Istanbul. Last October, a blast at a Kurdish peace rally in Ankara killed nearly 100 people. Both attacks were blamed on the Islamic State (IS) terror group, although Kurdish activists accused Turkish state intelligence agents of clandestine involvement in the October atrocity.

Turkish military intelligence, MIT, has been implicated in colluding with the IS group -- from gun-running and oil smuggling across the Syrian border, to facilitating the jihadists access to chemical weapons. Several Turkish opposition lawmakers have openly accused the Erdogan government of complicity in criminal activities and sponsoring extremists in Syria for the purpose of regime change in Damascus.

Can Dundar, the editor of Cumhuriyet, as well as several other Turkish journalists, have been arrested in recent months for publishing newspaper articles that exposed the MIT in providing weapons to terror groups in Syria. Those claims corroborate extensive information gathered by Russian military surveillance since its intervention in Syria last September, implicating Turkish state involvement in cross-border terror supply routes.

The notion that IS or some other Al Qaeda-linked network would carry out the latest attack in Ankara does not therefore seem plausible. The Erdogan government may publicly claim to be part of the US-led coalition fighting against Islamist terrorism, but, as noted, there is more evidence to implicate the Ankara authorities in covertly liaising with the very same terrorists.

Why would the terror group then bite the Turkish hand that feeds it?

As for the speculation that the Ankara car bombing could have been carried out by Kurdish militants, that doesn't make sense either. The YPG have gained a lot of favorable international media attention recently from their effective fight against IS and related jihadist terror brigades in northern Syria, including Jabhat al Nusra and Ahrar al Shams.

Working with Russian warplanes and Syrian army forces, the YPG has captured several key villages and towns north of the strategically important city of Aleppo. The Kurdish fighters are this week set to close in on the jihadist stronghold of Azaz, a town on the Syrian-Turkish border. Azaz is a major supply route for the regime-change insurgents, which the MIT has been implicated in facilitating.

In a complex situation, the YPG is also backed by the United States, even though Washington has given its support covertly to the anti-government militants in Syria. Washington labels this latter group "moderate rebels." But there is evidence that weapons supplied by the US have ended up in the hands of hardline al-Qaeda brigades, like IS and Nusra. This has led to the bizarre scenario where US-backed militants are fighting against other US-backed militants in northern Syria.

Related Topic(s): Isis; Kurds; Russia; Syria; Terrorism; Turkey, Add Tags
Add to My Group(s)
Go To Commenting
The views expressed herein are the sole responsibility of the author and do not necessarily reflect those of this website or its editors.