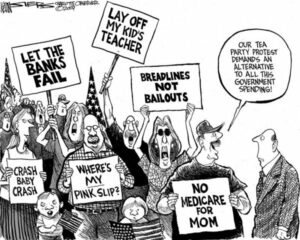 A friend emailed this:

A man walked into a bar and asked the bartender, "Hey, have you heard the latest Teabagger joke?" The bartender replied, coldly, "No. And I'll have you know I'm a Teabagger ."

The Teabaggers were getting really pissed off about people telling all these Teabagger jokes so they decided to stage a march on Washington . . .When last heard from they were 10 miles out of Seattle.

Seriously, though, it does seem those soggy neocons are a bit mathematically challenged. They show up in DC with a few thousand "protesters" (more on that in a minute) and think they number in the millions. Kinda sad, actually. Kinda like, suppose somebody threw an anti-Obama rally and nobody came? Well, nobody but the Archie Bunker types.

They are indeed a confused bunch, judging from the array of (often misspelled) protest signs they shake angrily in the air, and it's difficult to tell if this disparate collection of morons oppose Obama's economic policies, proposed health care plan, foreign policy in Iraq and/or Afghanistan, or they actually believe (or have been manipulated by the Limbaugh/Hannity/Beck axis of evil into believing) that Obama is a Nazi and/or a Socialist and/or a Fascist who is bent on killing Twig Palin and your white-haired, white-skinned granny, too.

One thing' for certain: These Lilly-white 'Mericans aren't too pleased to see a person of color in the WHITE House. That message comes through loud and clear in their ongoing inane assertions that Obama is from Kenya, or is a Muslim, and on their signs saying, "The Zoo has an African Lion, and the White House has a lyin' African..." So clever. So typical of these mini-minds. It is the common denominator running through these otherwise disorganized would-be protests, and it unites them in a common cause-- they don't like black people. Or at least, not black people in decision-making positions of power.

It's good that these narrow-minded freaks clump up together whenever possible-- even if they're basically clueless as to the reason they're gathering in the first place; at least it makes them easier to track. As a side benefit, these rabid rallies also raise the collective IQ of whatever communities they're vacating, even temporarily. It would be nice if they banded together, formed their own bigoted, racist colony and left the rest of America for the normal folks. It's no surprise that White Supremacist militia groups are wandering these events looking for new recruits.

As for the issue they actually claim they gathered to protest-- Obama's BIG GOVERNMENT economic policy, one of my favorite writers, Matt Taibbi, put it this way:

It's amazing, literally amazing to me, that it wasn't until Obama pushed through a package containing a massive public works package and significant homeowner aid that conservatives took to the streets. In other words, it wasn't until taxes turned into construction jobs and mortgage relief that working and middle-class Americans decided to protest. I didn't see anyone on the street when we forked over billions of dollars to help JP Morgan Chase buy Bear Stearns. And I didn't see anyone on the street when Hank Paulson forked over $45 more billion to help Bank of America buy Merrill Lynch, a company run at the time by one of the world's biggest a**holes, John Thain. Moreover I didn't see any street protests when the government agreed to soak up hundreds of billions in "troubled assets" from Citigroup, a company that just months later would lend out a jet furnished with pillows upholstered with Hermes scarves to former chief Sandy Weill so that he could vacation in Mexico over Christmas.

Read the rest of Taibbi's article, it's a perfect portrait of these people. Joe Sixpack cares nothing about the government waste, the American jobs shipped overseas, the outrageous spending and outright graft in Iraq, the needless loss of life, the no-bid Halliburton contracts, the Blackwater murderers who rape and pillage onhis tax dollar. Billions of Teabagger tax dollars are missing from The Bush Crime Family's deadly little foreign policy experiments in the Mideast and these racist idiots couldn't care less.

But let a (Black) President suggest a social public works program that would increase jobs for the middle class, benefit our infrastructure, or guarantee health care for all Americans . . . well, he's a (Black) COMMIE! No, he's (a Black) HITLER! Call Michelle Bachmann and tell her to sharpen the razor blades, it's time to slit your wrists to stop Obama before . . . before . . . well, before he helps us all!

Teabaggers. They're as stupid as their name.

Kathy never expected a career in radio as a talk show producer. Born and raised in Atlanta, Georgia, Kathy was completing her nursing degree when in 2001 - in an emergency - she was asked to fill in as the producer of Mike's program. Within a few (more...)
Related Topic(s): Conservatives; Health; Healthcare Reform; Neocons; Obama; Protest; Teabaggers, Add Tags
Add to My Group(s)
Go To Commenting
The views expressed herein are the sole responsibility of the author and do not necessarily reflect those of this website or its editors.