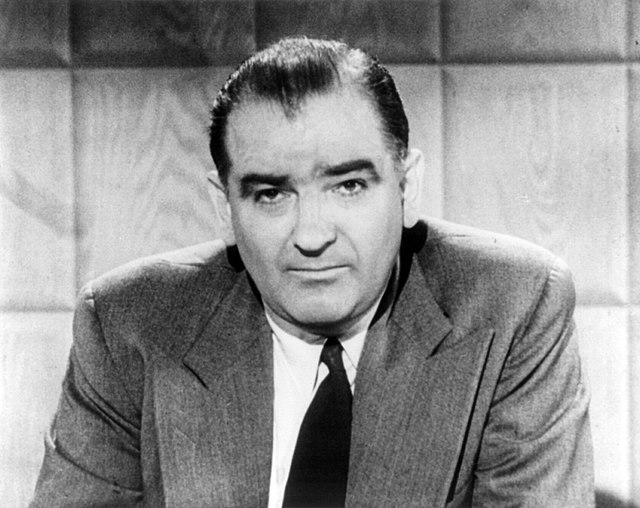 In their quest to demonize political foes and install Hillary Clinton in the White House, liberals have embraced some of the darkest days of the 20th Century. Nary a day goes by anymore when Hillary or one of her surrogates fail to invoke the sinister conspiracy of a Russian controlled fifth column in America. It has come to pass since the thwarted 2013 regime change operation in Syria that Russian Federation President Vladimir Putin has become our very own Emanuel Goldstein. He is a figure who can be used to keep the masses in a state of fear and loathing while a corrupt, authoritarian political class stomps out what remains of our once vibrant democracy.

That liberals and Democrats have so quickly taken to what amounts to modern McCarthyism is twisted and shameful, especially when considering that the left was once targeted by the infamous Wisconsin Senator. The red-baiting demagogue terrorized the country during the early days of the Cold War era with anti-communist witch hunts that left a trail of ruined lives in his wake. Tail Gunner Joe eventually overreached and received his comeuppance but the McCarthy years have been an indelible blot on the nation's history. Yet he is who Hillary Clinton and the Democrats have tacitly embraced in their pursuit of political power.

The bizarreness of this most contentious of election years and the anti-establishment fervor that has resulted in the rise of Donald Trump - and to a lesser degree, Bernie Sanders -- calls for desperate measures by the rancid establishment. So it is that the media and Democrats have adopted the now obligatory practice of blaming every leak of damaging information on Putin and have engaged in an Orwellian Hate Week tour de force of falsely transforming the bombastic billionaire into an agent of the Kremlin.

Liberals and progressives have fallen for it, and out of their hatred for Trump, are joining in on what is a dangerous descent into authoritarianism in the near future. As Hillary continues to up the ante to label millions of supporters of Trump as racists and neo-Nazis who are a part of a nebulous construct called the "alt-right" (which really doesn't exist as promoted) it's easy to see how the coming crackdown on political dissent will unfold.

Donald Trump represents such a threat to the establishment (the only one left now that Bernie has picked up his thirty pieces of silver) that extreme measures are needed to crush what is essentially a revolt against neoliberalism, the excesses of Wall Street parasites and the fallout from decades of globalization and perpetual war. However, it's not only Trump who has to be crushed, but all who have caused so much trouble for the corrupt duopoly. Once the crackdown comes it won't only be white nationalists, neo-Nazis and militia types who are targeted. Troublemakers will include environmentalists, antiwar protesters, anti-corporate activists, socialists, anti-abortion activists, civil libertarians, animal rights activists and all other threats to the corporatist warfare state.

Because once one group is linked to the Russians, all groups will eventually end up on that list. Considering that the unstable Mrs. Clinton has a king-sized ax to grind and favors to pay back, the very thought of the most technologically advanced surveillance system in planetary history being at her disposal should send a cold chill up the spines of all Americans who value their rights to freedom of speech and association.

Principled liberals and progressives should reject Mrs. Clinton's despicable foray into red-baiting or be prepared to sell their souls if that's what it takes for them to win the election.

At this point it's a pretty safe bet that it will be the latter.

Related Topic(s): Democrats; Democrats DNC; Hillary 2016; Hillary Clinton; McCarthyism; Power, Add Tags
Add to My Group(s)
Go To Commenting
The views expressed herein are the sole responsibility of the author and do not necessarily reflect those of this website or its editors.