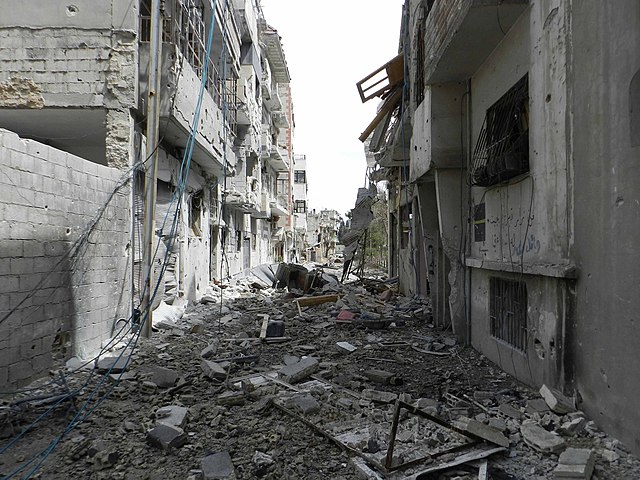 A schism within US government has come spectacularly into the open, with the Pentagon and CIA militarists seemingly subverting the president's authority over Syria policy.This amounts to a brazen pulling of rank by the militarist elements within the US power structure over the civilian titular head of government. This power struggle came to light dramatically -- if briefly -- with the US air strike last weekend on the Syrian army base near Deir ez-Zor in which over 60 troops were killed.That massacre was no accident, as the Pentagon subsequently claimed. It was a deliberate mortal blow to the shaky ceasefire worked out the week before by US Secretary of State John Kerry and his Russian counterpart Sergey Lavrov.Within hours of the Deir ez-Zor attack on Saturday evening, there were reports of air strikes on civilian areas of insurgent-held eastern Aleppo. But none of the reports were able to confirm the identity of the warplanes involved.

Two days later, media coverage shifted to the collapse of the Syrian ceasefire and what is being described as an "outrageous" air strike by Syrian or Russian warplanes on a UN aid convoy near the northern city of Aleppo. Again, no reports have been able to identify the aircraft alleged to have perpetrated that attack, although Washington blamed Syria and its Russian ally.

Predictably, following the attack on the humanitarian convoy in which 12 civilian aid workers were killed and several trucks ferrying food were destroyed, the US is saying that plans to cooperate with Russian military in Syria are now off the agenda.

It is true that the Syrian government declared earlier on Monday that the ceasefire was over. Forces loyal to President Bashar al-Assad have resumed air strikes and ground operations against insurgents in eastern Aleppo and around the capital Damascus. Russian air power is also providing support in the resumption of operations by the Syrian army.But it is the aforementioned sequence of violence that needs to be particularly ascertained in order to appreciate the real significance of why and how the latest Syrian ceasefire has broken down.

First of all, we should note that the Pentagon and its CIA covert arm were conspicuous in their dissent to the Obama administration's diplomatic efforts to implement a ceasefire in partnership with Russia.

When John Kerry met with Sergey Lavrov in Geneva on September 9 to finalize a planned truce, the head of the Pentagon, Defense Secretary Ashton Carter, was openly telling media outlets that he opposed any deal with Russia. It wasn't just Carter. Other American military chiefs were also deprecating any liaison with Russia over Syria.Nevertheless, Obama and his top diplomat Kerry persisted -- despite the objections of the US military -- in coming up with a "deal" with Russia that envisaged a cessation of violence, humanitarian aid to war-torn cities like Aleppo, and, remarkably, an ambitious proposal for US and Russian military forces to form a joint task force to go after al-Qaeda-linked terror groups, such as the rebranded al-Nusra Front and Daesh (ISIS/ISIL/IS).

For the ceasefire to take hold and for US-Russia joint operations to begin, the Kerry-Lavrov deal hinged on the separation of US-backed supposed "moderate rebels" from the notorious al-Qaeda-type extremists.Even as the ceasefire came into effect on September 12, the Pentagon was contemptuously voicing doubts about its success. It was obvious that the US military establishment did not want the ceasefire arrangement with Russia. That dissent was tantamount to subverting Obama's presidential authority and his favored diplomatic option.

Why was the Pentagon antsy over the ceasefire plan with Russia? After demonizing Moscow as a global threat for the past two years, part of the Pentagon's aversion was that any successful partnership with Russia over Syria would be a pointed negation to the hype of the new Cold War over Ukraine and Europe.

More importantly, however, is that the Pentagon and the CIA knew that in Syria the White House spiel about "moderates" and "terrorists" being separable was always an illusion.
President Obama and his foreign secretary John Kerry may talk all they want about "vetted opposition fighters" and purportedly "fighting against terrorists."But the war planners in Washington know all too well that in the real world of America's dirty war in Syria there is no such division of "good" and "bad" rebels among the insurgents. They are all part of a proxy terror front of illegally armed militants, which the US and its NATO and Arab allies have funded, armed, trained and directed for the past six years to overthrow the Syrian government.That's why the Pentagon was expressing such pessimism about Kerry's diplomatic efforts with Lavrov. The US militarists have a more realistic, if unspoken, awareness of the true criminal nature of the militant groups fighting against the Assad government. Simply because the Pentagon and the CIA have masterminded the proxies, all of which are acting as terrorists, whether they go by the media monikers of "moderates" or "extremists."A second crucial reason for why the US military planners opposed the ceasefire was because they were apprehensive that if the truce failed -- as it surely would -- then the failure would demonstrate the fallacy of the official Washington narrative of it only supporting "legitimate, moderate, vetted rebels."

And, thirdly, if somehow the US and Russian air forces were to get to the stage of carrying out joint strikes against terror units that would be the ultimate anathema for the Pentagon and CIA. In that unlikely event, the Americans would be obliged to disclose to the Russians where their supposed "moderate rebels" are located. Which, as noted, is a fabrication. What the US and Russia would be targeting are covert American regime-change assets, which is impermissible for Washington's war planners.

The Pentagon's misgivings were founded too. From the outset of the ceasefire, all the anti-government militant groups were engaging in breaches. And, glaringly, there was no separation of any of the insurgents, as John Kerry had appealed for. In other words, the American official narrative about the Syrian war was being exposed as a huge lie. And America's involvement in sponsoring a terrorist front in Syria was becoming transparent.

The ceasefire regime was abided by Syria and Russia, but it was the US-backed militants who continued acts of terrorism, preventing, for example, humanitarian access to Aleppo all last week because of shelling and sniping at the Castello Road arterial route.

Given the damning revelation of US terrorist collusion in Syria, the Pentagon apparently took the decision to blow up the incriminating ceasefire. The first sabotage came with the US air strikes on the Syrian army base near Deir ez-Zor. It is inconceivable that such a massacre, accompanied by Daesh temporarily taking over the base, could have been caused accidentally.In short order, a series of unidentified warplanes carried out strikes in and around Aleppo, including the blast on the UN aid convoy. No one knows as yet who carried out those strikes, but it is plausible that they were false flag attacks by US forces intent on obliterating the waning ceasefire, and distracting from the earlier US massacre at Deir ez-Zor.

Related Topic(s): Ceasefire; Military; Military Madness; Pentagon; Syria Massacre, Add Tags
Add to My Group(s)
Go To Commenting
The views expressed herein are the sole responsibility of the author and do not necessarily reflect those of this website or its editors.