Mandy Patinkin, who learned from top brass CIA operatives what defending the Homeland entails, emotionally expressed feelings lingering among some of the world's comfortable on the December 19, 2015 Colbert Late Show.

"We need a new paradigm--if war isn't working. We spent $4 trillion on war!"

"What is spent on marginalized people in humanity? All of these wonderful young Muslims men and women, who have had no education, no opportunity, no good schooling. So what do they do? They look for someone else who'll say they'll give them a better life"

"Why aren't we taking that money used for bombs and making schools and hospitals and homes and opportunities?"

For a long time, Marine General and Former Commander in Chief of the United States Central Command (CENTCOM), Anthony Zinni, has been repeating what he said on Bob Aucone's Freedom Forums about the American World Service Corps (AWSC) Congressional Proposal.

"Some people feel best that they can serve in uniform. Others in doing some sort of humanitarian work. Others in maybe working in government to help better create institutions, like rule of law institutions, or working with others in the area of diplomacy, or in other things that can support our effort."

"So I would like to see a broad based program that allows for all this." 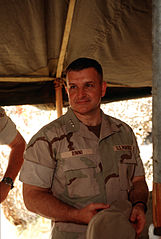 Retired General and former Commander of the U.S. and International Forces in Afghanistan Stan McChrystal, In the winter 2015 addition of the Peace Corps Association's Worldview Magazine, said:

"Nothing is more important than developing in our citizens a sense of responsibility to each other and to the nation."

"We are losing our concept of citizenship. This sense of responsibility and contribution that John F. Kennedy trumpeted, and the willingness to sacrifice for an idea that Abraham Lincoln immortalized in 272 words at Gettysburg, feel like faint echoes from earlier, nobler times."

"Today, the need for such a common experience of citizenship is more poignant than ever. We are drifting apart. Contrary to the illusion of constant connectivity, Americans are isolated--geographically, ethnically, economically, religiously, and culturally. An affluent student from Greenwich, Connecticut will never meet a student from Harlem."

"While a new system of National Service would be expensive, we estimate it would cost $22.3 billion for for one million service year positions. The return on investment is over three-to-one."