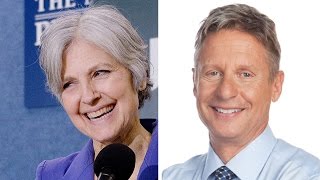 Which candidate should progressives support in 2016? It depends a bit on your priorities.

If you care more about socialized medicine than you do about peace, honesty, and civil liberties, vote for Hillary. The rest of this essay is not for you.

If you long to bring back the blue collar heyday of the 1950s by forming a national picket line, and can live with bringing back some of the racism of the 1950s, vote for Trump. The rest of this essay is not for you either.

But if you really care about civil liberties, if you want to end the Drug war, if you want black lives to matter to the government, you need to go third party. The question is which party: Green or Libertarian? Jill Stein or Gary Johnson?

Ideologically, I assume most of you reading this are closer to Stein. I will not attempt to change your mind. (I will, however, call attention to the substantial overlap in positions.)

In a typical election year, a third party campaign is mainly about sending a message. The metric of a campaign is thus:

(quality of message) * (loudness of megaphone)

Dr. Stein is getting plenty of news hits. I assume that she is as good or better a speaker than Governor Johnson (this isn't hard!). So, for most of you reading this, Stein wins handily by this metric.

But this not a typical election year! Both major party candidates are incredibly unlikeable. Hillary Clinton would be in court or in jail if she were a notch or two less powerful. Donald Trump has serious personality issues, and has basically led a Know-Nothing takeover of the Republican Party. A third party candidate could actually win this year. So for this year the metric has an additional term:

(quality of platform) * (probability of victory)

In a later section, I will make the case that the probability of victory factor is easily an order of magnitude higher for Johnson than for Stein. But first, let us look at the quality of platform.

Gary Johnson has been making a big deal over the I Side With quiz. When he took it, he agreed most with himself (Duh!), but next in line was Bernie Sanders! Take the quiz yourself and see how his answers compare to yours. If they are closer to you than the answers of Hillary or The Donald, then the "quality of platform" factor above is likely positive. You will, of course, need to adjust according to your own issue priorities.

For those who don't want to take the quiz, or don't trust the results, I'll list areas where Johnson is solidly progressive:

Governor Johnson is greener than the typical Libertarian. (This is important, as Ayn Rand and Murray Rothbard were not eco friendly!) He is an avid outdoorsman, into skiing, triathlons, other extreme sports, and has climbed the highest mountain on all seven continents. We are looking at a possible second Teddy Roosevelt here. And yes, he has consciously parted with libertarian orthodoxy to use his executive powers against polluters where citizen torts weren't up to the task.

Related Topic(s): Experience; Fair; Green; Libertarian; Politics; President, Add Tags
Add to My Group(s)
Go To Commenting
The views expressed herein are the sole responsibility of the author and do not necessarily reflect those of this website or its editors.