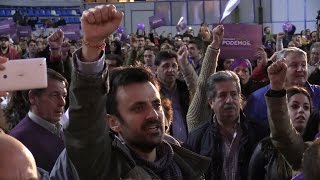 For the past quarter of a century there have been few watershed moments in Spanish political history. Like a well-choreographed pas de deux, the center-left Socialist Workers Party (PSOE) and right-wing Popular Party (PP) have taken turns governing the country.

But the 2015 election changed all that. Upstart parties on the right and left crashed the ball, punished the two major parties, and forced another round of voting on June 26 that could be a turning point in a growing campaign to roll back austerity policies that have spread poverty and unemployment throughout the continent.

Last December's vote saw the ruling PP drop 63 seats and lose its majority. But voters chastised the Socialists as well, with the party losing 20 seats. Many of the seats that formerly went to the two major parties shifted to the left-wing Podemos Party and, to a lesser degree, the rightist Ciudadanos Party. In the current parliament, the PP controls 123 seats, the Socialists 90, Podemos 69, and Ciudadanos 40. Regional parties of Basques, Catalans and Canary Island independents hold 28 seats. The parliament has 350 seats and a ruling majority is 176.

The new election was forced when none of the parties could form a working majority. The PP and Ciudadanos are on the same page politically, but together fall short of a majority. The Socialists, Podemos and the regional parties -- most of which are leftist to one extent or another -- could have formed a government, but the Socialist Party refuses to have anything to do with Catalan separatists.

While polls indicate that Spaniards are likely to vote pretty much the same way they did in December, a new kid on the block has altered the electoral terrain and raised the pressure on the center-left Socialists to make a choice: follow the lead of Portugal, where the Socialist Party formed a united front with the Left Bloc and the Communist/Green alliance, or imitate the Social Democrats in Germany and join a "grand coalition" and make common cause with the right?

The "new kid" is "Unidos Podemos" ("United We Can"), a coalition of Podemos and the United Left (UL). No one expects the new alliance to win a majority, but most analysts predict, that under Spain's quirky election system the coalition could increase its representation by 25 percent, or somewhere between 15 to 20 seats. That would vault the new formation past the PSOE, making United Podemos (UP) the second largest bloc in the parliament. The PP is still number one and on track to slightly increase the 29 percent they received in the last election.

Spain's election geography is heavily weighted toward rural areas, where the PP and Socialist Party are strong. While it takes 128,000 votes to elect someone in Madrid, it only takes 38,000 in some areas of the countryside. The rules also favor regional depth over broad support. In December, the UL won almost a million votes but only got two representatives. Other parties averaged one seat for every 60,000 votes.

United Podemos has internal tensions, but both parties have put these aside for the moment. For instance, Podemos supports continued membership in NATO, while United Left opposes the military alliance. The UL is also opposed to the current structure of the European Union and calls for a "refounding" of the organization.

Conn M. Hallinan is a columnist for Foreign Policy In Focus, "A Think Tank Without Walls, and an independent journalist. He holds a PhD in Anthropology from the University of California, Berkeley. He oversaw the (more...)
Related Topic(s): Austerity; Election; Euro; Eurozone; Podemos; Spanish, Add Tags
Add to My Group(s)
Go To Commenting
The views expressed herein are the sole responsibility of the author and do not necessarily reflect those of this website or its editors.