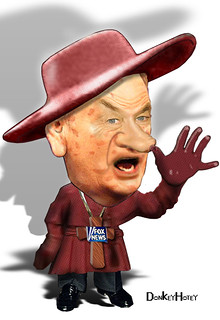 Bill O'Reilly, Self-Appointed Arbiter of Hypocritical Punditry
(Image by DonkeyHotey)   Details   DMCA
According to David Corn's February 19, 2015 article "Bill O'Reilly Has His Own Brian Williams Problem" in Mother Jones--the Fox News host stands accused of making false claims of stolen valor, similar in nature to those made by NBC News anchor Brian Williams. This despite O'Reilly's feigned outrage at the hypocrisy of Mr. Williams. The article cited several instances of O'Reilly's own historic, documented duplicity, but there was another one which went unreported that came from his own words as written within one of O'Reilly's own books.

The incident occurred In 1977, after the House Select Committee on Assassinations (H.S.C.A.) learned that Lee Harvey Oswald's friend, and the CIA's man in Dallas, George de Mohrenschildt, had recently returned from Europe to the United States, they sent investigator Gaeton Fonzi, to find him. As detailed on the Spartacus Educational website, Fonzi tracked him down to a town on the coast of Florida, where he was living while visiting his daughter. Readers Digest author Edward Jay Epstein, who had offered him $1,000 a day for a four-day interview, and on the third day of these interviews, March 29, 1977, de Mohrenschildt told Epstein that, while he had never been on the CIA's payroll, he had done favors for "CIA connected officials" and they had reciprocated those favors by helping him secure business contacts overseas. Those contacts led to business deals that provided him with data, which he would then use to report intelligence back to the same CIA personnel. Around noon of that third day they took a lunch break and agreed to meet again at 3 p.m. De Mohrenschildt returned to his room, where he found a card that Fonzi had left requesting a meeting to obtain his testimony on behalf of the House Select Committee on Assassinations.

A gunshot was heard shortly after that by others within or outside the house and de Mohrenschildt's body was discovered shortly thereafter. FoxNews host and New York Times bestselling author Bill O'Reilly, in his book Killing Kennedy: The End of Camelot, made the bizarre and unverifiable, highly suspect claim that he was standing outside the door to the house where DeMohrenschildt was staying at the very moment when the shotgun blast was heard (This questionable claim, if true, might explain the real reason why George decided to kill himself). Alternatively, Mr. O'Reilly might have overused his editorial license in this instance, as others have asserted. This story fails the "smell test," on a number of points, since that story seems to have materialized well after the fact and his news colleagues in Dallas at the time could not verify the statement, nor could anyone else at the scene of the shooting. This was but one of the instances of O'Reilly's prevarications in his book, including his description of Lee Harvey Oswald's sharpshooting expertise as being a "crack shot" when the record shows that his last test in the Marine Corps barely qualified him to be holding a rifle at all. Indeed, men who knew him in the Marine Corps have stated that he "lacked coordination" and called him "a very poor rifle marksman."

Bill O'Reilly's televised hypocritical bravado, after numerous previous close calls, may now be winding its way down to a merciful end if fairness with the treatment received by Brian Williams prevails. His disappointed fans may miss him briefly, but it will inure to their ultimate benefit since in the grand scheme, they will be less subjected to his brand of half truths and whole lies. His career rise took him to many cities across the country, back when he was a more serious and intellectually honest investigative reporter, decades before he wound up at the pinnacle of prevarication. In the ultimate irony of his long-delayed, now-probable demise, the proofs of his present-day lies were documented by none other than himself. It was done through the numerous videos of his previous reportage, as demonstrated in these few cited examples that supplement the numerous other ones exposed by David Corn's article and others published subsequently.

There is poetic justice served in O'Reilly's comeuppance: It simply proves the maxim of "what goes around comes around."

Related Topic(s): Bill OReilly; Excerpts; Killing; Truth, Add Tags
Add to My Group(s)
Go To Commenting
The views expressed herein are the sole responsibility of the author and do not necessarily reflect those of this website or its editors.

The FBI's Harassment of Martin Luther King Jr.: Directed by J. Edgar Hoover -- on behalf of Lyndon B. Johnson

So who is the Biggest Prevaricator: Brian Williams or Bill O'Reilly?

New Book "LBJ: From Mastermind to The Colossus" published

In the Wake of Selma Movie Reviews, Confusion Abounds