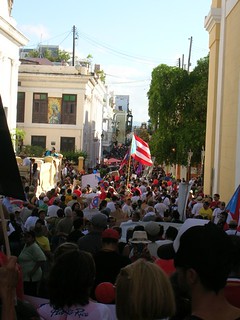 In June 2015, Puerto Rico's Governor Garcia announced that $73 billion in debts 'cannot be paid'. In August 2015, Puerto Rico went into default with Governor Garcia's Chief of Staff, Victor Suarez, stating 'we don't have the money' to pay back our debts. Puerto Rico (PR) became expendable years ago, and has since fallen into an economic death spiral. Why, what's next and who's next are three questions that the corporate media is avoiding, despite the fact that these debt bombs bursting, elephants in the room, are getting bigger each time a new debt bomb bursts -- Stockton CA, Detroit MI, Puerto Rico -- and that the same causes of PR's economic collapse exist at all levels -- local, state and national -- all across the USA. The underlying causes for debt collapses, geopolitical and economic, are intensifying nationwide.

The USA propped up Potemkin Places around the Soviet empire during the Cold War to say 'look, see how great US style capitalism looks? Come to the side of US capitalism and abandon your Soviet socialism.' We, the US, didn't have the money to make really appealing-looking Potemkin Villages all around the Soviet block, but former President Reagan calculated that we could finance it. Confessions of an Economic Hit Man style, US money lenders spread out all over the 'free world' with loan papers to sign, for example, to Sweden, the UK, France, Spain, Italy, Greece, Turkey, Asia and Latin America, including PR.

To contrast US-style capitalism with Soviet-style socialism in Cuba, the US government wrote IRS Section 936 to make products made in PR tax-free. Gigantic government pensions including generous health-care benefits were promised in PR, as they have been all over the USA. A US binge borrowing spree began in 1982. Like jam spread out on toast, tens of trillions of borrowed dollars got spread out all over, including PR, into housing, shopping malls, office towers, long-term temporary jobs, corporate profits and more. PR looked better with all that borrowed money and an extra couple hundred thousand jobs from IRS Section 936 making PR a Caribbean tax haven for rich factory owners.

The Russians and the other Soviet-style socialists saw what glittered from tens of trillions of borrowed dollars worth of cosmetic improvements in nearby places like Spain (a 1930s Cold War battleground), Italy, Greece and Turkey. And the part of the Soviet empire in the Caribbean, Cuba, didn't glitter half as much as PR did after tens of billions of borrowed dollars in cosmetic makeovers to make that island look prettier, for a little while.

The US government hoped in the 1990s and beyond, to 'convert' Cuba too, which accounts for IRS Section 936 on the books till 2006 and PR's binge-borrowing spree being allowed to fester until 2014. Certain elements of the US government became convinced, about ten years ago, that Cuba either didn't have weapons of mass destruction, as George Bush claimed in 2002, or that they wouldn't use them offensively. The government's biggest fear alleviated, they shrugged Cuba off to a more distant part of their to-do list while they tried to create more clever ways to try to convert Cuba and they let Puerto Rico go. In the legacy of the Cold War ashes, yesterday's Potemkin Village, Puerto Rico, became expendable.

China became the top priority. The Trans Pacific Partnership (TPP) is a union that Washington and wall street want to prop up to combat China, cold-war style. Now, the US push is on to construct Potemkin Places around China to try to convince the Chinese that US-style capitalism looks better. Proposed members of TPP include Australia, Canada, Chile, Colombia, Japan, Malaysia, Mexico, Peru, the Philippines, Singapore, South Korea, Taiwan, Thailand, the USA and Vietnam.

William Edstrom graduated from Columbia University in 2003. He has worked as a scientist for ten years, has co-authored publications in scientific journals such as Nature and the Journal of Biological Chemistry, and co-authored Agents of (more...)
Related Topic(s): Bankers; Capitalism; Crime; Debt; Decline; Default; Education; Empire; Government; Healthcare; (more...) Insolvency; Jobs; Pensions; Police; Shipping; Socialism; Taxes; Unemployment, Add Tags  (less...)
Add to My Group(s)
Go To Commenting
The views expressed herein are the sole responsibility of the author and do not necessarily reflect those of this website or its editors.

Debt Collapse: The Decline and Fall of the United States of America