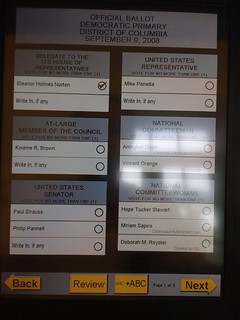 Free Press readers may be familiar with Scytl, the promoter of online and mobile voting, and their apparent connections to the intelligence community. Renewed research into Scytl has revealed new connections to the intelligence community, new market positioning, and new opportunities for both personalized surveillance and electronic election fraud.

Scytl's 2012 entry into the American election market occurred through the purchase of SOE software, a Tampa based manufacturer of election management and reporting software known as the Clarity suite. Scytl initially maintained essentially a front address in Virginia while digesting SOE during the the 2012 election cycle. Since then there has been a pattern of SOE rebranding and reorganizing itself along with a merger and new set of strategic partnerships.

Through looking at Scytl's ownership and investors, we can see a more frightening pattern of investment and market synergy. In 2012 the Free Press broke the news of the connection between one Scytl's parent companies, Nauta Capital, and Carrier IQ, a maker of mobile phone applications with obvious spyware uses. Nauta's expansion into this market sector along with an expansion into mobile devices, voice bio-metrics, social network monitoring, online gaming, and cloud computing should raise an eyebrow.

SOE is no longer SOE. SOE is now calling itself "SOE, A Scytl Company." There are no other Scytl companies in the US that have been identified at the time of this writing. It would appear from this rebranding that there is the intention of there being more "Scytl Companies" in the future. This rebranding may be PR deflection of Scytl's overseas origin and ownership, or it may have a dual purpose.

Representatives of the Ohio Green Party traveled to Tampa in order to meet with SOE and purchase custom software for tracking voter registrations and other election management tasks. SOE's name is not on the office building's marquee or directory and garnering face time with company officials proved difficult. During the eventual interview the SOE spokesperson said that the company only does "custom work for governments" and referred the party to "Scytl" for "specialized election work."

SOE saw a period of management chaos after being purchased by Scytl. Reviews online of working there tell vague tales of revolving doors in some of the top offices combines with rapidly shifting project priorities. This chaotic pattern seems to have changed and there is now a clear management team in place. This management team has a number of principals that stand out.

Starting the list is Pere Valles, who came directly from Scytl. He is now CEO. He is Scytl's man running SOE. He is also on the board of Scytl by virtue of representing the interest of a key investor in Scytl, Balderton Capital. Balderton is a British not entirely spun-off spin-off of Benchmark Capital that has a history of investment in tech companies of interest to the intelligence community. For instance, Benchmark has invested in Nextdoor.com, which Vulcan Capital (Paul Allen's venture capital firm) also invested in. Vulcan Capital is also invested in Scytl. The Free Press has done previous reporting on Nextdoor as a nexus of investment for intelligence community related venture capital firms.

Valles was previously with three other companies. Prior to Balderton, he was Vice President and CFO of Globalnet, a telecom provider. He appears to have been brought in to effect the sale of that company to Titan L-3, a major defense and intelligence contractor. The sale of Globalnet, two years in the making, was finalized just as the Abu-Gharrib scandal broke in 2004. One of Titan's employees was a translator at the prison and was exposed in subsequent reports to have raped at least one juvenile prisoner. He was not fired.

Prior to Globalnet, Valles worked for the accounting firm KPMG and prior to that he was a principal at Diamond Cluster consulting, along with all of the founders of Nauta Capital.

Scytl's Vice President of Communications is Michelle Shafer, who is the quintessential voting machine industry shill. She has previously served in a similar capacity with Sequoia Voting Systems, Hart Intercivic and Calibre Systems. The last of the list is a defense industry firm that made a brief attempt to enter the election industry through the delivery of absentee ballots to armed forces personnel abroad.

Another SOE Vice President is Brian O'Connor. O'Connor came to SOE recently from Crossmatch Technologies. Crossmatch is a provider of biometric technologies to the defense department and department of homeland security. Four current executives at Crossmatch came from another biometric technology company, L-1 Identity Solutions. L-1 was founded by Robert LaPenta. LaPenta is also one of the founders of and still a major stockholder in L-3 Communications, the parent company of Titan L-3 communications.

Prior to working at Crossmatch, O'Connor worked for Sequoia Voting Systems and Global Elections Systems just prior to the latter's acquisition by Diebold. Diebold later spun Global Election Systems off as Premier Elections Systems. The later was then purchased by Election Systems and Software (ES & S). Federal anti-trust regulations forced ES & S to spin Premier off again. It was then purchased by Canada-based Dominion Voting Systems. A month later Dominion also purchased Sequoia.

SOE has expanded its market share through at least one merger. In 2013 SOE acquired Oklahoma based Maxim Consulting. Maxim has offices in Oklahoma City and Dallas and was an IT firm specializing in Oracle database management and integration. Their entry into the elections industry was voter registration management software. Their largest contract was with the Cherokee Nation. They executed this contract in partnership with Texas-based voting machine manufacturer Hart InterCivic.

The merger gives SOE a complete set of products from Registration, through ballot production and election management, to vote counting and tabulation and election night reporting. Although the relationship between Hart and SOE is not clear post merger, Michelle Shafer's former tenure there as well as her continued residence in Austin where Hart is based bodes well for the continuation of their relationship.

Related Topic(s): Election Integrity; Election Integrity, Add Tags
Add to My Group(s)
Go To Commenting
The views expressed herein are the sole responsibility of the author and do not necessarily reflect those of this website or its editors.