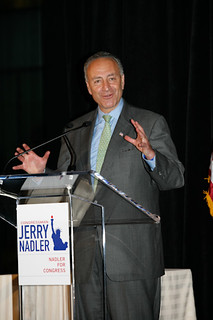 New York Senator Chuck Schumer's statement opposing the Iran deal reads like a wishy-washy-wish-I-didn't-have-to-write this Dear John letter to President Obama. Yes, breaking up is hard to do, especially when your other lover is the American Israel Public Affairs Committee (AIPAC) and they've got you by the gonads -- spending upwards of 40-million dollars to convince your 400,000 Jewish constituents to jam your phone lines and demonstrate in front of your office until you issue a rambling 1600 word statement that ends sheepishly with, "I believe the vote to disapprove is the right one."

Being an English teacher, I find the use of the preface "I believe" revealing in its lack of conviction.

I'm afraid Senator Schumer would fail Persuasive Writing 101 because using wimpy qualifiers like "I believe" or "I think" or "To me" are the English teacher's no-no's, warning signs to the reader that the writer is unsure, second-guessing himself. On the other hand, if the writer is not trying to persuade anyone but is instead trying only to appease both lovers, to keep one dangling while the other publicly celebrates but quietly questions -- Will he vote to over-ride the Presidential veto or just vote to oppose the deal? -- then "I believe" is a useful stalling technique which gives the writer more time to make up his mind as to which lover he will marry.

Before delivering the final Dear John blow, Schumer -- slated to become the Senate Majority Leader if the Democrats retake the Senate -- spends a hefty paragraph professing his love and admiration for President Obama and Secretary of State Kerry. "The President, Secretary Kerry and their team have spent painstaking months and years pushing Iran to come to an agreement. Iran would not have come to the table without the President's persistent efforts to convince the Europeans, the Russians, and the Chinese to join in the sanctions."

He credits the President with speeding the development of the terrifying MOP (not broom), the Massive Ordinance Penetrator (another attempt to sex up mass murder), a 30,000 pound bunker buster bomb that can reportedly penetrate 200 feet of earth and 60 feet of concrete (Iran's Fordow nuclear facility) before detonating. One can't help but wonder if such an explosion would poison over a million people living in Qum, Iran's 8th largest city, near where the underground uranium enrichment facility is located.

Marcy Winograd is a high school English teacher in the Los Angeles Unified School District. In 2010, she mobilized 41% of the Democratic Party primary vote when she ran as a congressional peace candidate challenging Blue Dog incumbent Jane Harman.
Related Topic(s): Iran Treaty; Schumer-Charles, Add Tags
Add to My Group(s)
Go To Commenting
The views expressed herein are the sole responsibility of the author and do not necessarily reflect those of this website or its editors.