Imagine a world where fresh water is so scarce that it is not a free resource, but a product that comes with price tags, perhaps, for some, it will even become a luxury. And being that having non-toxic fresh water is a key component to just living, the poor will spend half of their overall income just to have fresh water.

Now you're most likely thinking, this is just some crazy talk coming from yet another liberal-progressive writer. Well, read on, this is occurring, even as you read this article. 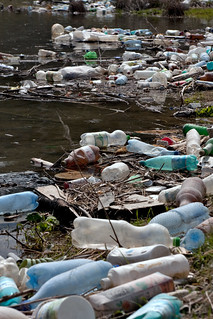 Plastic bottles and garbage on the bank of a river - if Nestle' Waters has its way, it seems the only fresh water in your world will come in plastic bottles.
(Image by Horia Varlan)   Details   DMCA

In Lagos, the most populous city in Nigeria, this is already the case - everyone must pay for life-giving water. The majority of the population, living in dire squalor in the slums while eking-out meagre existences, spend at least half their family incomes on canisters of fresh water. The more well-off may be able to afford a higher grade of processed, bottled, marketed water, but even for them, the price isn't all that cheap.

And in other Third World Countries, like Pakistan, where the public water supply has failed due to a societal plagues and near-government collapse, Nestle' has come to the rescue - promoting its fresh-water-resource product as an alternative to fixing the country's public water dilemmas.

In Pakistan, Nestle' has become an H20 vampire. Pakistan is Nestle's test market for the corporation's Pure Life initiative. In his documentary film, Bottled Life: Nestle's Business with Water, Swiss journalist Res Gehringer has investigated this money-making phenomena of Nestle' turning fresh water into a multi-billion-dollar business. In this documentary, it shows that the Swiss corporation, the most powerful food and beverage company in the world, refused Gehringer to its production plant in Pakistan -- but Gehriger did get to see something of life outside the factory fence. "In the nearby village groundwater levels have fallen dramatically, and the village fountain water is nothing more than foul-smelling sludge," according to Bottled Life.

And in the village of Bhati Dilwan, Pakistan, a former village councilor says children are being sickened by filthy water. Who's to blame? He says it's bottled water-maker Nestle', which dug a deep well that is depriving locals of potable water. "The water is not only very dirty, but the water level sank from 100 to 300 to 400 feet," Dilwan says on Global Research.

Well, you've just met what is perhaps the meanest corporation in the world. Now meet the world's meanest corporate Chairman and CEO, Peter Brabeck-Letmathe. He's clever and stealthy, and doesn't want anyone to see him as being mean. No, he wants to appear as a really nice guy. A man who cares about the world and the people who live in it. Oh really? After watching how Brabeck-Letmathe operates, you might find him a really rotten rogue.

After becoming Nestle's Chairman of the Board in 2005, Brabeck-Letmathe developed a corporate communication strategy for Nestle to be a noble and caring world force through "Corporate Social Responsibility" and "Creating Shared Value." These are two of the buzz phrases that Nestle' uses often in promoting itself to the world stage.

But behind all the smoke and mirrors, it's still a zero-sum game for Brabeck and Nestle' - they are more intent on profiting on the world's fresh-water supply through back-door privatization of countries' water supplies - including the water supply of the United States of America - than in saving the planet. For Nestle', it's simple as this: Sure, you can enjoy fresh water, but you'll have to pay. And as the world's water supply becomes more tainted by pollution, scarcity, and government roadblocks, the relative price for what you pay for water will consistently be on the rise.

In the USA, a grassroots effort is working to stop Nestle' and its quest to monopolize the water supplies of the nations of the world. StopNestleWaters.org is comprised of rural citizens fighting to preserve control of their water supplies and local economies from Nestle for the following reasons: 1) Because Nestle's predatory tactics in rural communities divide small towns and pit residents against each other. 2) Because Nestle' reaps huge profits from the water they extract from rural communities -- which are left to deal with the damage to watersheds, increases in pollution and the loss of their quiet rural lifestyle. 3) Because Nestle' has a pattern of bludgeoning small communities and opponents with lawsuits and interfering in local elections to gain control of local water supplies. 4) Because the environmental consequences of bottled water on our atmosphere, watersheds and landfills are simply too big to ignore.

Nestle' chocolate chips look colorful and delicious, but the next time you think of buying a Nestle' product, think of the high price this Swiss corporation wants to charge you for your drinking water.
(Image by m01229)   Details   DMCA

Nestle' has brought its water war to the Golden State. Since 2003, the McCloud Services District signed a contract with Nestle Waters of North America to build a one-million-square-foot water bottling plant in town -- a contract that was alleged to be negotiated in secret and signed without any real public discourse, scrutiny, or really, even any knowledge by the citizenry of the little community. And in California, a state that has suffered horrid droughts during the past few years, along with the water-sucking needs of the state's fracking and agricultural industries, having this water vampire, Nestle', setting up such a gargantuan operative to deplete even more of California's fresh-water supply will ultimately lead to a depraved supply of this free natural resource.

It almost seems as if Nestle', very much aware of California's water woes, has targeted McCloud, Calif., as a place to place its vampire-like teeth in the USA. Nestle's cowardly and clandestine strategy is outlined in the following excerpt from an article in BusinessWeek:

Few of McCloud's residents knew about the agreement. That is, not until September, 2003, when board members posted a notice in McCloud's post office announcing a town meeting to unveil the plan. Local business owner Richard McFarland did a double take when he saw the flyer.

A few days later, on Sept. 29, he and 100 other residents piled into the elementary school gym for the Nestle town meeting. As they waited for it to start, a TV beamed a continuous loop of CEO Jeffery extolling his company's environmental credentials.

Related Topic(s): Luxury; Nestle; Water; Water Rights; Water Supply; Water Wars, Add Tags
Add to My Group(s)
Go To Commenting
The views expressed herein are the sole responsibility of the author and do not necessarily reflect those of this website or its editors.