This is a hastily put together cut and paste, (thanks to Wikipedia) based on my long familiarity with France. An original comment on this event which is destined to have long-term repercussions, will follow in the coming days.

France is the only country I know of that has an official policy of secularism. Religion was banned, or at least frowned upon, in the Soviet Union, but that was not the same thing. In France, secularism is reflected in a wide range of laws that go back to 1905, when the separation of the State from all religions was.[tag] codified 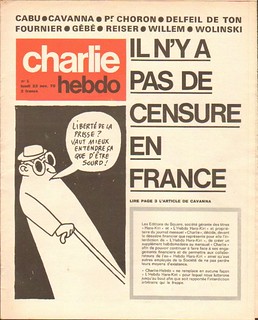 It's important to know that a century later, France has the largest Muslim community in Europe, equal to one tenth of its population. Due to France's century-plus colonization of North Africa (it took over Algeria in 1830) and the lengthy stages of its disengagement, French/North African relations are more dense that the relations between other European countries and their erstwhile colonies. North African cultures have become a part of French culture, via music, the cinema and literature. Muslim students have always gone to school with Catholic students, and while 'integration' has certainly been rocky, and North Africans have been widely discriminated against, there can be no turning back.

In September of 2010, the French Senate passed a law prohibiting concealment of the face in public. This instituted a ban on face-covering headgear, including masks, helmets, balaclava, niqÄbs and other veils covering the face in public places, except under specified circumstances.The ban also applies to the burqa, a full-body covering, if it covers the face. The key argument supporting this proposal was that face-coverings prevent the clear identification of a person, which is both a security risk, and a social hindrance in a society which relies on facial recognition and expression in communication. The key argument against the ban is that it encroaches on individual freedoms. While searching for precise dates on-line I came upon an article stating that the law against face coverings had already resulted in many women abandoning the workforce for remunerative activity that they could engage in at home. And in France, as in the rest of Europe, young Muslims are leaving to join ISIS. The number, probably conservative, is put at around one thousand and includes women.

Freedom of the press also has a long history in France.The Law on the Freedom of the Press of 29 July 1881 (French: Loi sur la liberte de la presse du 29 juillet 1881), often called the Press Law of 1881, is a law that defines the freedoms and responsibilities of the media and publishers in France. It provides a legal framework for publications and regulates the display of advertisements on public roads. Although it has been amended several times since its enactment, it remains in force to the present day. Inspired by Article 11 of the Declaration of the Rights of Man and the Citizen of 26 August 1789, it is often regarded as the foundational legal statement on freedom of the press and of speech in France. At the same time, it imposes legal obligations on publishers and criminalizes certain specific behaviors (called "press offenses"), particularly concerning defamation.

There has been a consistent backlash against 'Islamization', led by the National Front party, that first gained prominence in 1982, when it won a local election in a town not far from Paris. Since that time, Jean-Marie Le Pen's movement grew to the point where he reached the second round in the 2002 presidential election. His daughter Marine took over the party in 2011, and she too upset the applecart, finishing third in the 2012 presidential election. She quickly turned away from the party's traditional anti-Semitism and built on the disenchantment of low-income segments of the population with socialist President Francois Hollande's policies. Among other unexpected developments, like other traditionalist European leaders, she has spoken out in support of Vladimir Putin.

Irreverent and stridently non-conformist in tone, the publication is strongly antireligious[2] and left-wing, publishing articles on the extreme right, Catholicism, Islam, Judaism, politics, culture, etc. According to its former editor, Charb (Stephane Charbonnier), the magazine's editorial viewpoint reflects "all components of left wing pluralism, and even abstainers".[3]

In the early hours of November 2, 2011, the newspaper's office in the 20th arrondissement[16] was fire-bombed and its website hacked. The attacks were presumed linked to its decision to rename a special edition "Charia Hebdo", with the Islamic Prophet Mohammed listed as the "editor-in-chief".[17] The cover, featuring a cartoon of Mohammed by Luz (Renald Luzier), had circulated on social media for a couple of days.organizationCharb was quoted by AP stating that the attack might have been carried out by "stupid people who don't know what Islam is" and that they are "idiots who betray their own religion".Mohammed Moussaoui, head of the French Council of the Muslim Faith, said his organization deplores "the very mocking tone of the paper toward Islam and its prophet but reaffirms with force its total opposition to all acts and all forms of violence."[18] "[18]FranÃ§ois Fillon, the prime minister, and Claude Gueant, the interior minister, voiced support for Charlie Hebdo,[16] as did feminist writer Ayaan Hirsi Ali, who criticized calls for self-censorship.[19]

Foreign Minister Laurent Fabius criticized the magazine's decision, saying, "In France, there is a principle of freedom of expression, which should not be undermined. In the present context, given this absurd video that has been aired, strong emotions have been awakened in many Muslim countries. Is it really sensible or intelligent to pour oil on the fire?"[25] However, the newspaper's editor defended publication of the cartoons, saying, "We do caricatures of everyone, and above all every week, and when we do it with the Prophet, it's called provocation."

This, then is the background for the assassination today of twelve employees of Charlie Hebdo, including its editor, by a group of armed Islamist gunmen, who claimed to be acting 'in the name of the Prophet'.

Related Topic(s): Africans; Anti-semitism; Backlash; Catholicism; Culture; Freedom; Gunmen; Islamization; Killing; Law; (more...) Media; Muslim; Newspapers; Other; People; Politics; Prophet; Provocation; Satire; Secularism, Add Tags  (less...)
Add to My Group(s)
Go To Commenting
The views expressed herein are the sole responsibility of the author and do not necessarily reflect those of this website or its editors.