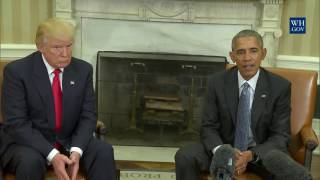 After months of mudslinging and vitriol, US President-elect Donald Trump was greeted this week by a chummy President Obama with a cozy fireside seat at the White House.

Some media outlets sniped at Trump's surprise election, calling him the "first reality TV star to become president." In truth, the whole US political system seems to be a reality TV show.

In the weeks up to polling day on November 8, Democrat candidate Hillary Clinton and large sections of the US media were denouncing Trump as a "Russian stooge." Trump's alleged friendliness towards Russian President Vladimir Putin was said to be proof that the Republican candidate was a "Kremlin agent." The Kremlin rejected the accusations as fatuous, pointing out that there was not a scintilla of evidence.

The claims, however, were not merely electioneering rhetoric to smear Trump. The Obama administration officially weighed in to accuse Russia of state-sponsored hacking of computer systems and "interfering in the US election" to get Trump elected. The White House based its provocative allegations on an assessment made by the Director of National Intelligence and Department of Homeland Security. In other words, US accusations of Russian subversion could not have been leveled in a more serious way.

That means, if you follow this logic, that Trump is now heading to occupy the White House thanks to Russian espionage and propaganda influencing the vote in his favor. So, what then was outgoing President Obama doing holding photo ops with "Comrade Trump" in the Oval Office, smiling and exchanging pleasantries? At one point, the incumbent Commander-in-Chief said he was "rooting for Trump's presidency to succeed because if it does then America will succeed."

Hold on a moment. Only days before this avuncular tete-a-tete marking the "peaceful transition of power," Obama's administration and the mainstream media were labeling Trump as a Russian fifth columnist.

Obama had also mocked Trump as being "uniquely unqualified" to be president with access to the nuclear keys.

It is notable how US media claims of Russian spying and interference suddenly ceased the day after Trump was elected. Granted, there have since been lame attempts to make something sinister out of the news that Russian diplomats were admittedly in touch with Trump and Clinton campaign aides before the election.

Apart from that damp-squib story that the New York Times and Washington Post tried to enliven, for the most part the "Russian hacker" hue and cry before the election has strangely disappeared from the public arena. In the light of Trump's cordial reception at the White House and the general acceptance by the Washington establishment including President Obama, defeated candidate Hillary Clinton and the mainstream media, that is stunning evidence that the whole anti-Russia bashing prior to the election was completely concocted and disingenuous.

Think about it. How could Trump be painted one day as a beneficiary of Russian espionage, and then the next day literally, he is being feted as the "45th president of the USA" -- whom, as Obama says, "we are rooting for"?

This demonstrates how degraded US statecraft has become. The government, its intelligence services and the country's supposed quality news media are all prepared to fabricate and propagate lies against a foreign state -- Russia. Obviously, because how could serious concerns one day be so easily jettisoned the next?

Evidently, the demonization of Russia as a hostile, interfering foreign power trying to upend US internal politics is a gross falsehood. Otherwise why would Trump be officially accepted? And why have all the grave media claims just vanished?

But a much more serious aspect to this official US propaganda is that it illustrates how Russia is being set up more generally as an "enemy state." Recall that US intelligence agencies were reportedly preparing to launch cyber attacks on Russian infrastructure all on the back of claims that Russia was hacking into the American presidential elections. If somehow US cyber attacks were carried out to cripple Russian industries and public utilities that would have constituted an act of war. Russia would have been obliged to respond, and the whole dangerous dynamic could have escalated to an all-out war.

If US government and its intelligence agencies, as well as supposedly independent news media, are seen to be so disingenuous, then that destroys their credibility on other matters. Can you believe anything they say about Russia with regard to allegedly threatening European security or committing war crimes in Syria?

Related Topic(s): American Hypocrisy; Donald Trump; Election; Media; Obama; Putin; Reality Tv Show; Russian Influence, Add Tags
Add to My Group(s)
Go To Commenting
The views expressed herein are the sole responsibility of the author and do not necessarily reflect those of this website or its editors.