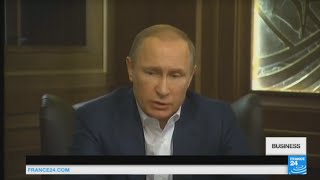 According to various reports, the Russian government is reconsidering the neoliberal policy that has served Russia so badly since the collapse of the Soviet Union. If Russia had adopted an intelligent economic policy, Russia's economy would be far ahead of where it stands today. It would have avoided most of the capital flight to the West by relying on self-finance.

Washington, however, took advantage of a naive, gullible and demoralized Russian government which looked to Washington for guidance in the post-Soviet era. Russians thought that the rivalry between the two countries had ended with the Soviet collapse and trusted American advice to modernize the Russian economy with best-practice Western ideas. Instead, Washington abused this trust to saddle Russia with an economic policy designed to carve up Russian economic assets and transfer ownership into foreign hands. By tricking Russia into accepting foreign capital and exposing the ruble to currency speculation, Washington made sure that the US could destabalize Russia with capital outflows and assaults on the ruble's exchange value. Only a government unfamiliar with the neoconservative aim of US world hegemony would have exposed its economic system to such foreign manipulation.

The sanctions that Washington imposed -- and forced Europe to impose -- on Russia show how neoliberal economics works against Russia. The policy's call for high interest rates and austerity sank the Russian economy -- needlessly. The ruble was knocked down by capital outflows, resulting in the neoliberal central bank squandering Russia's foreign reserves in an effort to support the ruble but actually supported capital flight.

Even Vladimir Putin finds attractive the romantic notion of a global economy to which every country has equal access. But the problems resulting from neoliberal policy forced him to turn to import substitution in order to make the Russian economy less dependent on imports. It also made Putin realize that if Russia were to have one foot in the Western economic order, it needed to have the other foot in the new economic order being constructed with China, India, and former central Asian Soviet republics.

Neoliberal economics prescribes a dependency policy that relies on foreign loans and foreign investment. This policy creates foreign currency debt and foreign ownership of Russian profits. These are dangerous vulnerabilities for a nation declared by Washington to be "an existential threat to the US."

The economic establishment that Washington set up for Russia is neoliberal. The head of the central bank Elvira Nabiullina, minister of economic development Alexei Ulyukayev, and the current and former finance ministers, Anton Siluanov and Alexei Kudrin, are doctrinaire neoliberals. This crowd wanted to deal with Russia's budget deficit by selling public assets to foreigners. If actually carried through, this policy would give Washington more control over Russia's economy.

Opposed to this collection of "junk economists," stands Sergey Glaziev. Boris Titov and Andrei Klepach are reported to be his allies.

This group understands that neoliberal policies make Russia's economy susceptible to destabilization by Washington if the US wants to punish the Russian government for not following Washington's foreign policy. Their aim is to promote a more self-sufficient Russia in order to protect the nation's sovereignty and the government's ability to act in Russia's national interests rather than subjugate these interests to those of Washington. The neoliberal model is not a development model, but is purely extractive. Americans have characterized it as making Russia or other dependencies "hewers of wood and drawers of water" -- or in Russia's case, oil, gas, platinum and diamonds.

Self-sufficiency means not being import dependent or dependent on foreign capital for investment that could be financed by Russia's central bank. It also means strategic parts of the economy remaining in public, not private, hands. Basic infrastructure services should be provided to the economy at cost, on a subsidized basis or freely, not turned over to foreign owners to extract monopoly rent. Glaziev also wants the ruble's exchange value to be set by the central bank, not by speculators in the currency market.

Neoliberal economists do not acknowledge that the economic development of a nation with natural resource endowments such as Russia has can be financed by the central bank creating the money required to undertake the projects. They pretend that this would be inflationary. Neoliberals deny the long-recognized fact that, in terms of the quantity of money, it makes no difference whether the money comes from the central bank or from private banks creating money by making loans or from abroad. The difference is that if money comes from private banks or from abroad, interest must be paid to the banks, and profits have to be shared with foreign investors, who end up with some control over the economy.

Apparently, Russia's neoliberals are insensitive to the threat that Washington and its European vassals pose to the Russian state. On the basis of lies Washington has imposed economic sanctions on Russia. This political demonization is as fictitious as is the neoliberal economic propaganda. On the basis of such lies, Washington is building up military forces and missile bases on Russia's borders and in Russian waters. Washington seeks to overthrow former Russian or Soviet provinces and install regimes hostile to Russia, as in Ukraine and Georgia. Russia is continually demonized by Washington and NATO. Washington even politicized the Olympic games and prevented the participation of many Russian athletes.

Despite these overt hostile moves against Russia, Russian neoliberals still believe that the economic policies that Washington urges on Russia are in Russia's interest, not intended to gain control of its economy. Hooking Russia's fate to Western hegemony under these conditions would doom Russian sovereignty. *Michael Hudson's new book, Killing the Host is published in e-format by CounterPunch Books and in print by Islet. He can be reached via his website, mh@michael-hudson.com

Related Topic(s): Economic Crisis; Economic Stimulus; Russian Economy, Add Tags
Add to My Group(s)
Go To Commenting
The views expressed herein are the sole responsibility of the author and do not necessarily reflect those of this website or its editors.