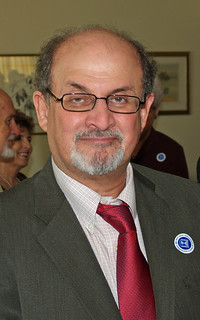 Salman Rushdie, target of a fatwa ordering his death by Ayatollah Khomeini, in 1989, commented on the killings of satirists and cartoonists in Paris. His full comment, originally posted on the English Pen website:

Religion, a mediaeval form of unreason, when combined with modern weaponry becomes a real threat to our freedoms. This religious totalitarianism has caused a deadly mutation in the heart of Islam and we see the tragic consequences in Paris today. I stand with Charlie Hebdo, as we all must, to defend the art of satire, which has always been a force for liberty and against tyranny, dishonesty and stupidity. 'Respect for religion' has become a code phrase meaning 'fear of religion.' Religions, like all other ideas, deserve criticism, satire, and, yes, our fearless disrespect.

UPDATE: Rushdie, with many other noted and hundreds of other authors and journalists, signed PEN American Center's official response to the attacks.

s writers, editors, and artists we stand together today in solidarity and outrage at the murder of our colleagues at Charlie Hebdo in Paris. This attack on cartoonists, writers, and editors is an attack on free expression worldwide. It is an attempt to terrorize and intimidate all of us in order to inhibit the free flow of ideas.

Peaceful coexistence within diverse communities requires a climate of tolerance and an open exchange of views that includes criticism, humor, and hyperbole. The right to satirize, to question, to expose, to mock, even when offensive to some, is a bulwark of a free society. Today's bloody retribution for the drawing and publishing of cartoons represents a terrifying challenge to these values of tolerance.

We call upon all governments, religious leaders, and civil society institutions to join us in condemnation of this vicious attack. We ask them to insist that however offensive speech may be to some, it is never a justification for violence.

We call upon responsible authorities and institutions to redouble their efforts to protect those working on the front lines of free expression worldwide who put themselves at personal risk to voice controversial viewpoints. Today's effort to silence criticism by murdering the artists and writers who voice it must be met with a far wider movement to defend the right to dissent, which forms the spine of free expression

Related Topic(s): Charlie Hebdo; Killing, Add Tags
Add to My Group(s)
Go To Commenting
The views expressed herein are the sole responsibility of the author and do not necessarily reflect those of this website or its editors.