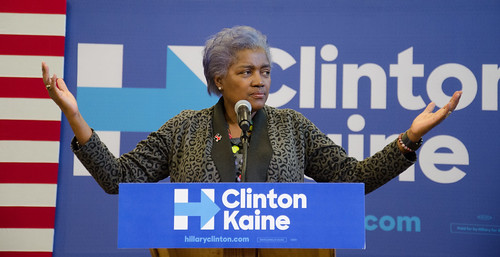 Do not wait. Do not let things settle. Get rid of the corrupt, election rigging despicable liar.

CNN has already fired her. The first step the DNC should do, now that she doesn't have the cover of her crooked crony Hillary is to purge all the Clinton insiders from the dirty DNC den they've created-- every lying, election-rigging one.

"Donna Brazile, the interim chair of the Democratic National Committee, is not only refusing to apologize for giving debate questions to candidate Hillary Clinton. She's also saying she would do it again if given the opportunity.

"My conscience -- as an activist, a strategist -- is very clear," she said in an interview with talk-radio host Joe Madison that aired on Monday."

Brazile should not only be fired from the DNC, she should be banned from working with anyone in the Democratic Party again. End her career as a political operative immediately. This should be done with a statement from the few remaining Democratic leaders who can be trusted that they are going to purge the DNC and the Democratic party, from the Top Down to the lowest rungs, ie., aides and staffers who were brought in by Debbie Wasserman-Schultz or Brazile or Hillary Clinton.

Bernie Sanders supports congressman Keith Ellison to be to head of the DNC, according to The Hill, which stated,

"The co-chairman of the Congressional Progressive Caucus has expressed interest in the DNC chairmanship for some time and according to a report from Politico, Ellison had previously reached out to Hillary Clinton campaign officials and state party chairmen.

Sanders told Minnesota Public Radio that he supports Ellison to fill the position of party chairman.

While we're at it, now that we know that the DNC helped rig the primary, including colluding with the mainstream media and literally helping Trump to win the Republican primary, Bernie Sanders should be given the titular position of leader of the Democratic party. It is the only way that the Democratic Party has a viable path forward as an honest party.

Other Democratic leaders who strongly advocated for for Hillary should also lose their leadership positions-- Nancy Pelosi in the House and Chuck Schumer, who is planning on replacing Harry Reid, in the Senate. Both should have no role in the Democratic leadership. They were part of the problem.

Time is of the essence. We need to raise our voices and demand that this happen now.

I just received this email from Bernie Sanders:

The declining middle class is sick and tired of establishment economics, establishment politics, and the establishment media. People are tired of working longer hours for lower wages, of seeing decent paying jobs go to China and other low-wage countries, of billionaires not paying any federal income taxes, and of not being able to afford a college education for their kids - all while the very rich become much richer.

Related Topic(s): Chairman-dnc; Donna Brazile; Pelosi-Nancy, Add Tags
Add to My Group(s)
Go To Commenting
The views expressed herein are the sole responsibility of the author and do not necessarily reflect those of this website or its editors.