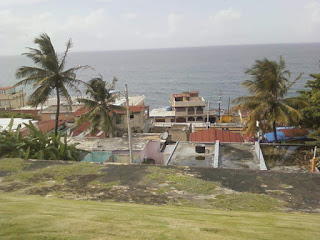 Just an hour before my wife an I landed in her native Puerto Rico last month, the island's government had defaulted on $1 billion in bond interest payments. It was the second default in five months for the cash-strapped government whose debt now totals $72 billion. None of this was evident as we waded through the crowds in Rafael Herna'ndez airport in Aguadilla, which had been converted into a civilian airport after the closure of Ramey Air Force Base 40 years earlier. People hugged their relatives, welcoming them back home or bidding them farewell. It was a normal scene you'd see at any airport in the world. But the situation in Puerto Rico is not normal, and you don't have to spend long there to see how regular people are suffering more every day under the crushing burden of debt.

You notice every time you make a purchase at the store or get the check at a restaurant. The sales tax in Puerto Rico now stands at 11.5 percent, after being raised 64 percent in July from 7 percent. The measure was approved by the island's governor, Alejandro Garca Padilla, in conjunction with a package of austerity measures to raise money to pay the interest on the island's debt to creditors.

This might not sound like an astronomical amount, but the impact is felt more in Puerto Rico than it would be in any of the states. Sales taxes are regressive. People with lower incomes spend more of their earnings on things that are taxed than those who can afford to store their income as savings. This means the lower your income, the harder you will be hit by the sales tax.

Puerto Rico's median average income of less than $20,000 is 50 percent less than the poorest American state. For families already struggling to pay the bills on such meager earnings, the additional sales tax burden is eating away their little disposable income, or worse, forcing them to borrow to pay for their basic necessities.

Outside a beachfront restaurant in Aguada, I noticed an SUV with a bumper sticker that summed up the feelings of many Puerto Ricans. "The debt is not ours, it belongs to the Empire," it read. Many people may believe this represents Puerto Ricans failing to take responsibility for running up a tab they now can't pay. But this would falsely assume that Puerto Rico exercises independent control over the conditions that created the debt. In reality, Puerto Rico is a colony whose political and economic structures are determined by the dictates of the empire they belong to.

Constrained by the neoliberal capitalist system of the United States, Puerto Rico is unable to chart its own course for independent economic development. The Interstate Commerce Clause of the Constitution makes it impossible for Puerto Rico to protect its own industries. They must allow American businesses equal access to Puerto Rico's markets. The Cabotage Laws make shipping to and from Puerto Rico prohibitively expensive, impeding demand for exports and driving up prices on imports.

The detrimental effects of U.S.-imposed restrictions on Puerto Rico's economy have forced them to incur debt to pay for social spending. Unlike every other industrial country in the world, the United States does not provide universal health care to its citizens. The federal programs that are supposed to guarantee insurance for the poor and the elderly do not apply equally to Puerto Rico.

Puerto Rico only receives half the rate of federal healthcare funding as the 50 states, even though its residents pay the same rates in payroll taxes. This strain was further exacerbated last month when the U.S. government cut payments to Puerto Rico's Medicare Advantage program by 11 percent. My in-laws told us how their prescription deductibles and their co-pays under their Medicare Advantage plans had increased. The Puerto Rican Healthcare Crisis Coalition (PRHCC) called the decision by the Centers for Medicare and Medicaid Services a "blow to the health of the entire Puerto Rican community."

The Affordable Care Act (Obamacare), which is supposed to guarantee health insurance to the rest of the population, does not apply equally to Puerto Rico either. While Puerto Rico passed its own laws requiring features of Obamacare - such as prohibiting denial of insurance based on pre-existing conditions and caps on coverage - there is no individual mandate. The result is a "death spiral" for private insurance plans. Elderly and sick people purchase coverage, while younger and healthier customers, who don't need the same level of costly care, opt not to participate. This drives up premiums drastically, making plans prohibitively expensive for those who need them most.

Like countries across the global South who have found themselves indebted to U.S.-run institutions such as the World Bank and International Monetary Fund, Puerto Rico has been encouraged to privatize its public assets and use the money to pay its creditors.

Under former Governor Luis Fortuño in 2009, Act 29 was passed to allow government to enter into public-private partnerships for infrastructure and other projects. It created the Public Private Partnership Authority (PPPA) to "identify, evaluate, and select the projects that shall be established as Public Private Partnerships."
The first target for private takeover of Puerto Rico's public infrastructure was the island's most traveled highway, PR-22. Autopistas Metropolitanas de Puerto Rico, LLC (Metropistas), was awarded a 40-year lease for $1.49 billion to operate both the PR-22 and PR-5 highways. The company is a consortium of a Goldman Sachs infrastructure investment fund and a Spanish toll concession company.


PR-22 runs from San Juan west through 12 municipalities towards Aguadilla. Metropistas recently raised the toll prices after the expiration of an initial period where they were prohibited from doing so. But apparently tolls are not the only way they are generating revenue.
A friend explained how the electronic toll collection system, AutoExpreso, had been malfunctioning and issuing fines for not having enough money in your account to pay the toll, even when the account did actually have money. He said that he received four separate fines, none of which was valid. When he tried to contest the fines he was told that based on a technicality (not submitting an appeal in writing by an arbitrary deadline) the fines would stand, even though they should have never been issued in the first place. When he complained, he was told he had a choice to pay or to find another route. Of course, the only alternative for commuters in that heavily populated area of the island is to use inaccessible and inconvenient back roads.