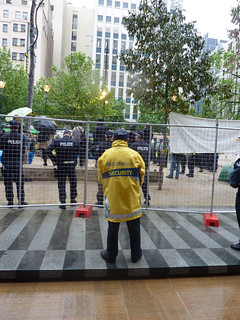 It's one thing to know and exercise your rights when a police officer pulls you over, but what rights do you have when a private cop--entrusted with all of the powers of a government cop but not held to the same legal standards--pulls you over and subjects you to a stop-and-frisk or, worse, causes you to "disappear" into a Gitmo-esque detention center not unlike the one employed by Chicago police at Homan Square?

For that matter, how do you even begin to know who you're dealing with, given that these private cops often wear police uniforms, carry police-grade weapons, and perform many of the same duties as public cops, including carrying out SWAT team raids, issuing tickets and firing their weapons.

This is the growing dilemma we now face as private police officers outnumber public officers (more than two to one), and the corporate elite transforms the face of policing in America into a privatized affair that operates beyond the reach of the Fourth Amendment.

Owing to the general complacency of the courts and legislatures, the Fourth Amendment has already been so watered down, battered and bruised as to provide little practical protection against police abuses. Indeed, as I make clear in my book A Government of Wolves: The Emerging American Police State, we're already operating in a police state in which police have carte blanche authority to probe, poke, pinch, taser, search, seize, strip and generally manhandle anyone they see fit in almost any circumstance. Expanding on these police powers, the U.S. Supreme Court recently gave law enforcement officials tacit approval to collect DNA from any person, at any time.

However, whatever scant protection the weakened Fourth Amendment provides us dissipates in the face of privatized police, who are paid by corporations working in partnership with the government. Indeed, if militarized police have become the government's standing army, privatized police are its private army--guns for hire, if you will. This phenomenon can be seen from California to New York, and in almost every state in between.

Technically, a private police force is one that is owned or controlled by a non-governmental body such as a corporation.

Read the fine print, however, and you'll find that these private police aka guns-for-hire a.k.a. private armies a.k.a. company police officers a.k.a. secret police a.k.a. conservators of the police a.k.a. rent-a-cops don't exactly remove the government from the equation. Instead, they merely allow them to work behind the scenes, conveniently insulated from any accusations of wrongdoing or demands for transparency. Indeed, most private police officers are either working for private security firms that are contracted by the government or are government workers moonlighting on their time off.

Related Topic(s): Police Abuse Of Power; Police Brutality; Police Coverup; Police State; Private Armies; Private Security, Add Tags
Add to My Group(s)
Go To Commenting
The views expressed herein are the sole responsibility of the author and do not necessarily reflect those of this website or its editors.