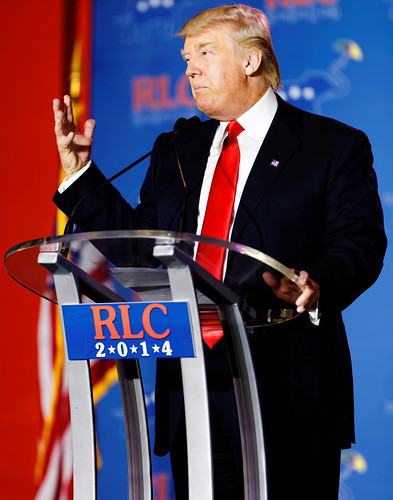 When Sen. Barack Obama was running for the presidency and for most of his two terms, the Tea Party right-wing claimed he was born in Kenya, that he was a radicalized Muslim, and was unfit to be president. The rise of the Tea Party led to a rise of racist ideology and an increase of violence during political rallies.

After Sen. Obama's election, Sen. Mitch McConnell, Senate majority leader, said the Republicans' primary direction was solely to block whatever the new President wanted to do. Other Republicans chimed in that President Obama was out to destroy the country. The country did not destruct under the Obama Administration.

Among the many policies that were enacted during President Obama's two terms were a significant improvement of the economy, an expansion of wilderness areas, increased nutrition programs for public schools, a bail-out of the auto industry, an elimination of the torture policies of the Bush--Cheney administration, and a reduction of U.S. forces in Iraq. Equally as important as dozens of programs to benefit Americans in the lower- and middle-classes, and improve health care and the environment, was that he avoided any scandal.

During the primaries and general election, both Donald Trump and Hillary Clinton engaged in the most vicious and poisonous campaign in recent history, while dealing with scandals and dancing around facts. President-elect Trump now calls for unity. It has little to do with unifying a divided nation and more of a call to support Trump himself. During President Obama's first campaign and his two terms, the conservative hard core declared, "Not our president." Hopefully the liberals will not similarly respond and support the President.

The Obama administration was staffed with civility and diversity. The Trump campaign was marked by a profanity-spewing fear-mongering leader and a staff of largely rich white males. Trump was usually seen as an angry demagogue, often with a smirk; in contrast, President Obama was serious when he needed to be, and playful , humorous, and joyful at other times. Trump's mostly outrageous declarations played to the Tea Party extremists, most of whom had lost any sense of humor they may have once had. Trump's public persona helped get him the nomination and the election. It is a sad and discouraging look at what America has slid into.

However, Trump has reversed some of his more extreme declarations. During the campaign he proclaimed he would re-institute torture to suspected terrorists, would jail Hillary Clinton, stated that people don't contribute to climate change, and that President Obama was probably a Muslim who co-founded Isis. With the emerging presidency, he denounced support from the alt-right extreme White Rights groups, has heaped praise upon both Clinton and Obama, and tacked slightly more to the center on other issues. He now says the U.S. cannot use torture and won't be calling to deport all illegal immigrants. He even softened his pronouncements about the "lyin' liberal media."

Trump has publically acknowledged that he was far more radical during his campaign in order to get the presidency but that was no longer necessary now that he will be taking the oath of office in less than three months. His constant flip-flopping does raise the issue of integrity.

Contrary to his opinion of himself, Trump will not be one of the greatest presidents, but he could be a good one if he listens to his advisors, and realizes that although he won the electoral college victory, Hillary Clinton had almost two million more voters than he did.

Contrary to his opinion of himself, Trump will not be one of the greatest presidents, but he could be a good one if he listens to his advisors, and realizes that although he won the electoral college victory, Hillary Clinton had almost two million more voters than he did.

If President Trump continues a slow move to the Republican center, the alt-Right hate movement will continue to disgorge filth and hatred. But there are still Trump's social graces. Hopefully, Vice-President Mike Pence, a civil and intelligent conservative, and some of the Trump advisors might be able to shut down Trump's Twitter account and scrub America's Tasmanian Devil of the anger and hate he currently expounds.

Whatever happens in the next four years will not result in the deterioration of the country. Just as all Americans needed to refer to Barack Obama as President Obama, so should liberals respect the office and refer to Donald Trump as President Trump.

[Dr. Brasch has covered government and politics for more than four decades. His latest of 20 books is Fracking America: Sacrificing Health and the Environment for Short-Term Economic Benefit.]

Related Topic(s): Donald Trump; People Trump Donald; President Trump; Trump Presidency; Trump Victory, Add Tags
Add to My Group(s)
Go To Commenting
The views expressed herein are the sole responsibility of the author and do not necessarily reflect those of this website or its editors.