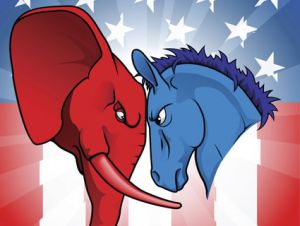 With only six days remaining in the US election campaign, both of the major capitalist parties are preparing for a situation where the November 8 vote fails to resolve the bitter struggle over control of the White House. With polls showing a tightening contest following the unprecedented intervention of the FBI, whose announcement of a renewed probe of Clinton emails was calculated to damage the Clinton campaign, it is increasingly likely that the contest could be determined by the outcome in a single state, such as occurred in 2000 with Florida and in 2004 with Ohio.

Clinton's lead had already begun to shrink prior to the FBI intervention, particularly after the government announced that Obamacare premiums would rise by an average of 25 percent in 2017.

Democratic candidate Hillary Clinton and her Republican opponent Donald Trump are mobilizing thousands of lawyers for deployment on Election Day to battleground states such as Florida, North Carolina, Pennsylvania and Ohio in anticipation of widespread efforts either to block voters from going to the polls or to disrupt the counting of the ballots they cast.

On Sunday, the state Democratic parties in Nevada, Pennsylvania, Ohio and Arizona filed preemptive lawsuits against the Trump campaign and state Republican parties charging a "coordinated campaign of vigilante voter intimidation" that violates the Voting Rights Act of 1965 and the Ku Klux Klan Act of 1871.

The suits targeted bogus "exit polling" and "citizen journalist" activities sponsored by Republican operatives, in violation of a 1982 court order that binds the Republican National Committee not to authorize or carry out "ballot security" campaigns aimed at voter suppression. The order forbids challenging individual voters either as they arrive at the polls or when they cast ballots, except as authorized by a federal judge.

Citing Trump's call for his supporters to invade polling stations in the city of Philadelphia, where the large African-American population is expected to vote for Clinton by huge margins, the Pennsylvania suit claimed that "the conspiracy to harass and threaten voters on Election Day has already resulted in acts that threaten the voting rights of registered Pennsylvania voters."

In Newark, New Jersey, US District Court Judge John Vazquez issued an order Tuesday giving the Republican National Committee 24 hours to provide details of agreements with the Trump campaign on efforts to prevent alleged "vote fraud" at the polls on Election Day.

Trump has regularly denounced what he calls a "rigged election," referring to get-out-the-vote drives in low-income, minority and student neighborhoods, and has declared that he would not necessarily concede the election result if he loses. In the last debate with Clinton, Trump said he would "keep you in suspense" on that question. The Trump campaign website urges volunteers to sign up as election observers to "help me stop Crooked Hillary Clinton from rigging this election."

The 2016 election is the first presidential campaign to be conducted after the 2013 Supreme Court decision in Shelby v. Holder that struck down key enforcement provisions of the 1965 Voting Rights Act on the grounds that racial discrimination was no longer a significant factor in denying access to the polls.

This decision opened the door to Republican-controlled state governments enacting measures deliberately targeting African-Americans and other groups believed more likely to vote for Democratic candidates. A series of court decisions this year have blocked such efforts in North Carolina, Texas, Wisconsin and several other states.

As the final week of the campaign began, Trump and Clinton continued to trade allegations of criminal activity in the wake of the letter from FBI Director James Comey to eight congressional committees Friday announcing new "investigative steps" in the probe of Clinton's use of a private email server while secretary of state from 2009 to 2013. This amounted to reviving an investigation that has been dormant since July, when Comey declared that there was no basis for bringing criminal charges against Clinton over mishandling classified information on her private server.

The letter was purportedly triggered by the FBI's acquisition of the laptop belonging to former Congressman Anthony Weiner, husband of longtime Clinton aide Huma Abedin. FBI agents found emails that "appear to be pertinent" to the Clinton probe, Comey said in his letter, although he acknowledged that since the emails had not been examined, there was no way of knowing whether they were "significant."

Given this uncertainty, Comey's public declaration to Congress only 11 days before the election was an unprecedented political intervention by one of the principal agencies of the military-intelligence apparatus. Its only foreseeable consequence -- and its purpose -- was to damage the Clinton campaign and bolster Trump, who had been trailing in most polls.

The brazenly political character of the FBI intervention was confirmed on Monday, when the agency released 129 pages of documents from its closed investigation into Bill Clinton's controversial 2001 pardon of fugitive billionaire Marc Rich. Nearly half of the pages of documents are completely redacted and there is little new information, making the decision to release the material eight days before the presidential election even more dubious. The conclusion of the investigation -- that there was insufficient evidence to warrant prosecution -- was omitted. Then on Tuesday, the FBI sent out a Twitter notice calling attention to the release of the documents.

Patrick Martin writes for the World Socialist Website (wsws.org), a forum for socialist ideas & analysis & published by the International Committee of the Fourth International (ICFI).
Related Topic(s): Campaign Smears; Donald Trump; Election 2016; Election-Voting Issues; Email; FBI; Fbi Director James Comey; Hillary Clinton; Political Mudslinging, Add Tags
Add to My Group(s)
Go To Commenting
The views expressed herein are the sole responsibility of the author and do not necessarily reflect those of this website or its editors.