Has fracking reached its twilight?

Has fracking reached its twilight?
(Image by Imahornfan)   Details   DMCA

I'll admit that I was completely caught off guard by the recent (and ongoing?) crash in oil prices. It'd be a stretch to say I'm embarrassed by my lack of foresight, although perhaps "dumb-ass" would be a bit deserving.

I would say I'm well enough versed with the reality of peak oil: I've read perhaps a couple dozen books on the topic, pored through several of the peak oil blogs (upon deciding to end my 5-year Internet hiatus a year ago), have seen several talks given by various writers on the topic, and I've attended two Age of Limits conferences.

Nevertheless, even though there were bloggers out there discussing the possible ramifications of low oil prices, its possibility still didn't register with me. I'll explain what I mean by that shortly, but to do that it'd be best if I first give a recap of what the mainstream media have been saying about collapsing oil prices the past couple of months.

If you've been following the recent oil-related news stories then you'll be familiar with two things: first, that the price of a barrel of oil has been crashing (to nearly 50% of its value half a year ago), and second, that OPEC (Organization of the Petroleum Exporting Countries) has refused to cut back its production, the hope being that a cut in supplies would have resulted in a rise in prices.

The first sign of trouble came after OPEC's November 27th meeting in Vienna whereupon it was announced that OPEC was going to maintain its production levels. Seeing how no explanation or elaboration was given, it was no surprise when the expected theories on the topic began appearing, and, of course, the conspiracy theories.

Some of the more mundane theories (not to say that there isn't any truth in them) include (1) that a rising US dollar has resulted in a downward pressure on the price of oil (since oil is priced and predominantly purchased in US dollars); (2) that Libyan production has increased and so contributed to a glut in supply; (3) that demand in Europe has been declining, also leading to a glut in supply; and (4) that increased production in the United States has meant increased consumption of domestic supplies and so a decrease in need for imports, once again resulting in a glut on world oil-supply markets. To name just a few.

Jumping over into the conspiracy theory realm (again, not to say that there isn't any truth in them), first is the notion that Saudi Arabia has colluded with the United States (something to do with the United States' Secretary of State having made a trip to Saudi Arabia a few months back), the intent being to bring down oil prices so as to crush the Russian economy (oil and natural gas make up about three-quarters of Russia's exports and more than half of its budget revenues). 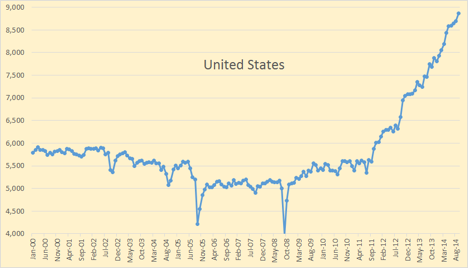 Another of the popular conspiracy theories is that rather than colluding with the United States, Saudi Arabia is actually attempting to crush the tight oil (otherwise known as shale oil or fracking) boom in the U.S., the idea here being to restore its and OPEC's dominance in the oil markets. For what's been going on is that since 2008 the United States has increased its production levels of oil -- thanks to fracking -- by some 4 million barrels a day, nearly doubling its previous extraction rate.

Secondly, since the peak in conventional oil supplies (that found under the ground and deserts and such) occurred in 2005, the only thing that's been keeping overall extraction levels increasing (in order to maintain worldwide economic growth) are the newly tapped unconventional oils -- tight oil, tar sands, and deepwater offshore oil. And since tapping these forms of oil is similar to the extra effort required when scraping the bottom of a barrel, these unconventional sources require more energy and so cost more money to extract.

The idea then is that since tight oil in the United States is rather expensive to produce, if Saudi Arabia lets the oil price drop, this could very well bankrupt shale oil producers in the U.S. With a drop in production levels, prices would level off if not rise again, and not only would OPEC reap the restored higher prices, but they wouldn't have lost any market share.

That all being said, deciding to finally end the silence and partially put to rest lingering conspiracy theories, Saudi Arabia's oil minister was quoted on December 18th as stating that "The share of OPEC, as well as Saudi Arabia, in the global market has not changed for several years... while the production of other non-OPEC [countries] is rising constantly." Similarly, the oil minister for the United Arab Emirates stated that "No one likes the price drop, but it is not right that one party should interfere to fix the matter. [The party] responsible for the price fall [by causing the current oil glut] should contribute to fix the imbalance in the market."

In other words, while OPEC members have maintained their overall production levels of roughly 30 million barrels a day for about a couple of years now, it is the United States' fracking industry that since 2008 has significantly increased worldwide production levels, earning itself, no less, the rather idiotic moniker of "Saudi America."

A few days after the aforementioned statements were made, Saudi Arabia's oil minister again pleaded for non-OPEC members to cut back on production, then adding that those countries"will realize that it is in their interests to cooperate to ensure high prices for everyone." Furthermore, he also added that OPEC doesn't intend to cut supply"whatever the price is." "Whether it goes down to $20, $40, $50, $60, it is irrelevant."

And finally, in his response to conspiracy theories bandied about regarding Saudi Arabia pulling out the oil weapon on so-and-so countries, Saudi Arabia's oil minister stated that"Talking about such alleged conspiracies... is absolutely incorrect and indicates a misunderstanding in some minds... Our economy is based on strictly economic strategies, no more, no less."

After four years in the film studies program at Ryerson University in Toronto, Allan Stromfeldt Christensen decided to turn his back on film making and refrained from submitting what became his final film into the short film program of the (more...)

Peak Oil and the Fracking Bubble: Could this Mimic the 2004-2008 Housing Bubble?

Money, the People's Proxy For Energy

Is Greece Planning to Print Energy?

How a (False?) Flag Debate and a Rent-a-Prime-Minister Assisted New Zealand in Relinquishing its Sovereignty

Donald Trump, Anthony Bourdain, and the Plight of their (Indentured) Mexicans