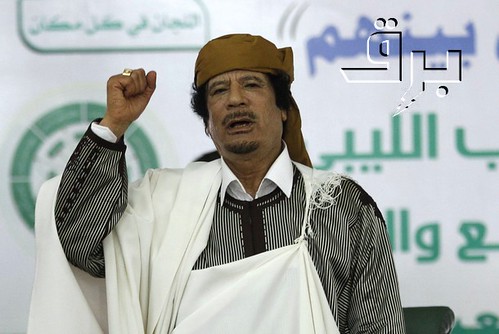 November 13, 2016, as this viewer waited for an exciting game between the New England Patriots and the Seattle Seahawks to begin, and listened to the Star Spangled Banner, the TV camera brought into focus a US flag so huge that it covered the entire playing field. This brought a flash back to 2011, and an even larger mile long green national flag of Libya held above the heads of thousands among a near million Libyans wildly demonstrating on the outskirts of Tripoli for their revolutionary hero Gaddafi and their Green Book Arab Socialist wealthy nation as British and French warplanes and warships bombed Tripoli and Libya's defense force and militias, and hunted its beloved revolutionary leader, who had brought their Libya up from the poorest nation in Africa to its richest, an independent African nation with a UN Quality of Life Index higher than nine European countries including Russia.[1]

The difference between the flag featured in a pre-game show of proud and comfortable patriotism with young Americans smartly saluting, and the flag honorded in a flash back to 2011 and a small African nation's brave and desperate show of patriotism is of course an explosive difference.Americans like any other nation's citizens should want to be happy and proud of their country.

Americans unlike the citizens of other nations (so very many of which have been bombed and or invaded by Americans), are at the same time citizens of the single superpower whose leaders demand the right to police all other nations.

Therein lies a bit of a hitch. Americans help draft a set of laws in 1945 under which the leaders of a nation whose leaders had demanded and pursued the right to police other nations with bombings and invasions were prosecuted in an international court of justice. When Americans salute their flag (often as US warplanes soar overhead), are they saluting as well a government whose leaders claim the right to bomb and invade at their own discretion in defiance of the very Nuremberg Principles of International Law used by the USA and other members of the United Nations to hang leaders and media celebrities of Nazi Germany?[2]

Then too, your author always assumed that everyone's mother and father taught their children not to go into someone else's home uninvited, let alone go in and break something or push anyone around. With this recollection in mind, this writer watched to see if any of these wonderful football stars were kneeling instead of standing at attention during the playing of the national anthem.

Post Script: Some game! Seattle by only a few points.

The massive rallies of nearly a million within a total Libyan population of a little over six million, expressed the Libyan people's firm opposition to US led NATO's 'humanitarian intervention' to such an astounding degree that Libya's well educated personable spokesperson Seif Gadaffi seemed happily convinced that the NATO attack would have to end in the face of such huge demonstrations against it. Your author shall never forget seeing on a European news site, an overjoyed Saif Gaddafi elated, smiling happily, trilled, relieved, convinced that the nightmare was over because a million, or more Libyans in a total population of little more than six, were wildly demonstrating with green flags for Gaddafi and their Jamahiriva or green book government on the outskirts of Tripoli even as NATO warplanes bombed within earshot. His elation was contagious, and for a moment or two I too naively thought yes, they would have to stop bombing for this overwhelming evidence that it was wrong. Then I remembered the incredible seeming omniscient ability of Western media to blackout news. Of course, with world opinion always in it craw, 'mainstream media' simply never reported these massive demonstrations for Gaddafi and against the US NATO UN sponsored continuous bombing then already at this juncture three and half months long. (Non-Western media covering the demonstrations did note that the bombings of Tripoli "had declined since the rise of the marches in Tripoli with a shift to increased bombing of other parts of Libya.").Readers may view a few of the non-Western reports with videos and photos and if interested read the full translation of Gaddafi's long speech of July 1, 2011 and HUGE PRO GADDAFI RALLY IN TRIPOLI - RAW FOOTAGE, 7/2/2011, www.blacklistednews.com/?news_id=14505 or videos can be seen with Gadaffi addressing the multitude by hookup to remote location at www.youtube.com/watch?v=nSnlIlATIKw and www.youtube.com/watch?v=a3lJAbRkzQ4

Neither would conglomerate US media ever report that only one month BEFORE Secretary of State Hillary Clinton's gloating and bragging as having had a hand in Gadaffi's (brutal) death, long term Italian Prime Minister Silvio Berlusconi had made an abject belated public confession, speaking before Italian reporters regarding huge Italian protests against NATO's war on Libya and its current relentless terror bombing during a strike for better work conditions in Rome in which the cry of union members was, "There is a silent massacre going on in Libya!" and "Don't let Sirte, Bani Walid and Sebha become the new Fallujah or the new Guernica". Berlusconi, also known to own ninety percent of Italian media, confessed as follows: "Libyan leader Muammar Gaddafi hasn't been the victim of a popular uprising!" That is the conviction of Italian Prime Minister Silvio Berlusconi, who has been a friend of Gaddafi till Italy became one of the leading countries behind NATO's war against Libya in March spoke as follows:"This has nothing to do with a popular uprising. The Libyan people love Gaddafi, as I was able to see when I went to Libya", Berlusconi said on Friday during a party meeting in Rome.He said he suspects there was a plot against Gaddafi."Powerful people decided to give life to a new era by trying to oust Gaddafi," Berlusconi said, according to Italian news agency ANSA. Earlier, in July, Berlusconi already said he was against NATO intervention in Libya but "had to go along with it", therewith exposing the fragility of the alliance trying to murder Gaddafi.He added: "What choice did I have considering America's pressure, President Georgio Napolitano's stance, and the Parliament's decision?" [Berlusconi says Libyans love Qaddafi: as Italians protest against NATO, Voltairenet.org www.voltairenet.org/article171382.html] Let the reader look at a peaceful and prosperous Libya, just five weeks before the US Secretary of State Hillary Clinton was urging the UN Security Council vote to bomb it, to the first week of February 2011, when the UN Quality of Life Index of 2010 had Libya ranked the 53rd highest nation, ahead of nine European nations (including Russia), a beautiful well kept Arab Socialist country, where everyone owned their own home, enjoyed free and modern health care, free good education up through PhD, a low infant mortality, the cheapest imaginable gasoline for cars - everyone was by law free from exploitation as even all wage labor was strictly forbidden in the Libyan constitution of a real decentralized democracy in which everyone participated at the local assemblies level where all issues of state concern were discussed before sending delegates to the central assembly of government in Tripoli. Political parties, or gangs of foreign backed profession politicians, were illegal.

Gaddafi's Libya was Africa's Most Prosperous Democracy, Zimbabwean Garikai Chengu a fellow at the Du Bois Institute for African Research at Harvard University, writes, "Contrary to popular belief, Libya, which western media described as "Gaddafi's military dictatorship", was in actual fact one of the world's most democratic States," and describes this in detail. "Even the New York Times, which was always highly critical of Colonel Gaddafi, conceded that in Libya, the intention was that "everyone is involved in every decision." Tens of thousands of people take part in local committee meetings to discuss issues and vote on everything from foreign treaties to building schools."

CNN, NY Times et al. have never reported that Libya, as opposed to desperately poor Egypt and Yemen had been enjoying a higher standard of living than nine European nations including Russia. Rather, they continued emphasizing Western media concocted misnomer 'Arab Spring' and long term condemnation of Gaddafi over his entire four decades of leadership of Libya and funding the movement for African Union as it Chairman. For almost as long as Cuba's Fidel Castro, Gaddafi had been slandered in the world's monolithic corporate powerful daily news media by innuendo and lies denigrating Gaddafi ever since 1969, when he led the bloodless revolution that replaced a British imposed King with a solid Arab socialist government. Using revenue from the oil that had been previously stolen by Britten and France, Gaddafi brought ht Libya up from the poorest to the most prosperous nation in Africa, and was building the largest Aquifer ever created. A great underground river was bringing water to Benghazi and greening the desert. Gaddafi had revived Nkruma's African Union and was funding organizations that were fighting against the genocidal machinations of continuing European exploitation of Africa through financing tribal strife as the colonial powers have always done. Gaddafi was blocking US military's AFRICON penetration in North Africa. Highly dangerous for the US and European establishment, Libya had begun minting part of the 44 billion US$ in gold held in Libya's State Bank, threatening the US dollar as world currency. Gaddafi, whose position officially was Defender of the Revolution, had made himself a greater target of assassination and vilification than Fidel Castro was for the speculative investors in neocolonial plundering who dominate the planet. In addition, Gaddafi, by his recent apology to African leaders on behalf of Arab nations for past Arab involvement in the African slave trade had infuriated extremists in neighboring Arab nations tightly allied with, and serving the foreign policy of Western powers.

Related Topic(s): Attack On Libya; Capitalism Over Humanity; Crimes Against Humanity; Libya; Libya Revolution; Neocolonialism; Nuremberg Principles; Patriotism; Western Imperialism, Add Tags
Add to My Group(s)
Go To Commenting
The views expressed herein are the sole responsibility of the author and do not necessarily reflect those of this website or its editors.