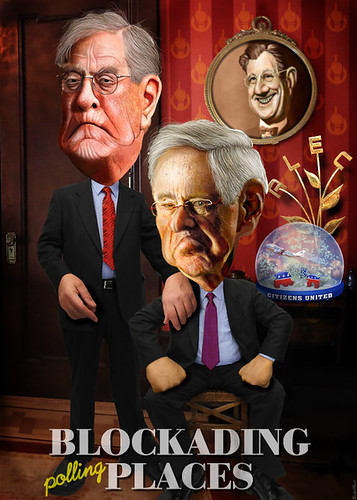 Privatization is the modern form of the Enclosure Acts, the theft of the Commons. Rousseau understood the origins of private property (and thus inequality and slavery):

On the Origin of the Inequality of Mankind

THE first man who, having enclosed a piece of ground, bethought himself of saying This is mine, and found people simple enough to believe him, was the real founder of civil society. From how many crimes, wars and murders, from how many horrors and misfortunes might not any one have saved mankind, by pulling up the stakes, or filling up the ditch, and crying to his fellows, "Beware of listening to this impostor; you are undone if you once forget that the fruits of the earth belong to us all, and the earth itself to nobody."

"Men are born free but born everywhere in slaves," he commented. And the reason was the theft of the Commons, which became known as private property. Private property is not personal possessions, your house, your toothbrush,etc. it is property which is not needed for survival (thus a form of hoarding) and is used to make money. I rent out my property and make money. I do not rent out my toothbrush or personal possessions.

When anarchists say property is theft, this is what they mean: bourgeoise or capitalist property, which is used to create wealth beyond the mere means of survival: private profit replaces public welfare. Selfishness replaces solidarity. And with selfishness, crime and violence rise.

Hoarding (the result of private property), of course, began with the first agricultural societies as surplus and when elites took control of the surplus, it became hoarding. Those who hoard precious resources then gain the power to sell them and accumulate even more wealth: this is the beginning of primitive capitalism.

In its advanced state, the surplus becomes not only resources but human labor, and it is at the point that labor becomes a commodity human effort becomes alienated labor, which Marx uses as the basis of the revolutionary movement.

I suggest that today, in our crowded cities of such wealth and miserable poverty living in close proximity, that alienation IS the root cause of crime. Poverty is not lack of resources (our early ancestors did not lack for resources and studies estimate they only had to "work" (ie gather plants and scavenge killed animals) a few hours a day, with the rest for leisure activities or just resting to restore energy. These early people did not know crime: how can you steal when everything belongs to everyone? And, given the abundance of resources (the Earth is a garden), why would anyone take more than he needed? Only when society had become divided by class, with a command chain, did crime arise, leading to the conclusion that poverty is the creation of hierarchical society, starting with the Agricultural Revolution.

So the end to poverty lies in completing the American Revolution, on a global scale, and creating a world in which equality is the norm. In such a society, crime will be rare, for the motives of crime lie in the sense of injustice: no criminal ever steal or kills without feeling it is somehow "justified." It is all but impossible to murder without anger. Given that violent crime is endemic in poor communities but rare in affluent, its seems clear that the solution is to end the motive, and that requires revolutionary change.

In fact, it is my view that crime is a misguided use of revolutionary energy. When half the poor kill the other half, it is to prevent them from united to throw off their chains. When people feel not alienated but united, they respect and serve each other....and that is the solution to poverty and crime, tho it will likely take much blood to overthrow the Masters of the Universe.

Trump has said we need Law and Order, and the solution to crime is more police. Police in poor communities actually represent the resented power of the wealthy....they do not cure poverty; they punish those who rebel. My proposal is that we discuss crime in terms of poverty...and poverty in terms of capitalism as a system of exploitation. Street crime is an indirect reaction to the crimes of exploitation and alienation; it is our job to understand it and help the workers of the world and their wayward children united and throw off their chains.

If you have had the patience to read this somewhat pedantic essay, I thank you and hope you have a deeper understanding of why both candidates have avoided talking about poverty and inequality. And why the progressive movement must work to unite "alienated labor" and their wild children in order to create a new system based on equality and shared prosperity and a sustainable economy based on green energy and a plant-based diet.

Related Topic(s): Alienation; Aristocracy; Capitalism; Crime; Exploitation; History; Inequality; Money; Participatory Economics Parecon; Police; (more...) Revolution, Add Tags  (less...)
Add to My Group(s)
Go To Commenting
The views expressed herein are the sole responsibility of the author and do not necessarily reflect those of this website or its editors.