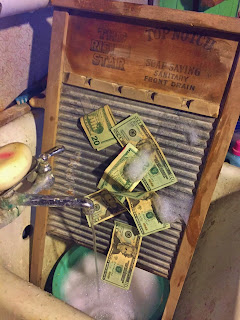 This is yet another example where a clear eyed, independent Bernie Sanders warned against passing legislation that he knew would be disastrous while Hillary Clinton pressed for its passage. Sanders said exactly what would happen if the Panama free trade agreement passed. He said it would make it easier for, "... the wealthiest people and most profitable corporations in this country to avoid paying their fair share in taxes by setting-up offshore tax havens in Panama.

After the free trade agreements passed in Congress, then Secretary of State Hillary Clinton released the following statement:

"The Free Trade Agreements passed by Congress tonight will make it easier for American companies to sell their products to South Korea, Colombia and Panama, which will create jobs here at home. The Obama Administration is constantly working to deepen our economic engagement throughout the world and these agreements are an example of that commitment.

In opposition to the Panama free trade agreement bill being debated in the Senate, Bernie Sanders said this on October 12, 2011 (Panama comments printed here in full):

Panama's entire annual economic output is only $26.7 billion a year, or about two-tenths of one percent of the U.S. economy. No-one can legitimately make the claim that approving this free trade agreement will significantly increase American jobs.

Then, why would we be considering a stand-alone free trade agreement with this country?

Well, it turns out that Panama is a world leader when it comes to allowing wealthy Americans and large corporations to evade U.S. taxes by stashing their cash in off-shore tax havens. And, the Panama Free Trade Agreement would make this bad situation much worse.

Each and every year, the wealthy and large corporations evade $100 billion in U.S. taxes through abusive and illegal offshore tax havens in Panama and other countries.

Related Topic(s): International Trade Agreements; Money Laundering; Panama Papers; Tax Haven; Tax Havens; Unrestricted Trade, Add Tags
Add to My Group(s)
Go To Commenting
The views expressed herein are the sole responsibility of the author and do not necessarily reflect those of this website or its editors.